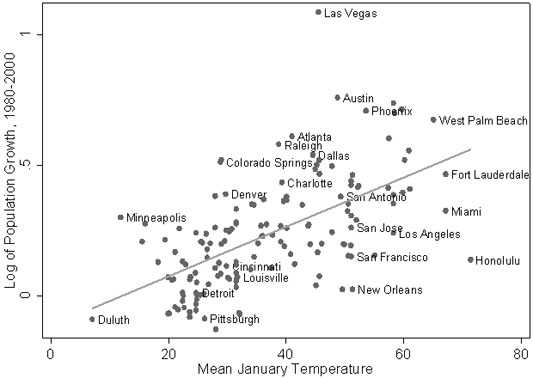 It was close to 60 degrees in Manhattan yesterday which reminded me I neglected to post Ed Glaeser’s fascinating commentary in the Economix Blog of the New York Times called Revenge of the Rust Belt [1].

It also brought to mind a Steven Wright [2] favorite of mine:

It doesn’t matter what temperature the room is, it’s always room temperature.

Pittsburgh has its Steelers because high transport costs made it costly to move coal. Prodigious amounts of energy were needed to work the metals, like iron and steel, which were the hard core of the Industrial Revolution. Since moving vast amounts of coke or coal was expensive, Andrew Carnegie’s steel factories were close to Henry Frick’s coking furnaces, which were close to Pittsburgh’s vast coal seam.

Over the course of the 20th century, transport costs plummeted. The real cost of moving a ton of goods a mile by rail declined by more than 90 percent. Manufacturing left cities, the Rust Belt and America altogether. Every one of the old industrial cities declined greatly. The city of Pittsburgh’s population fell from 677,000 in 1950 (its peak) to 334,000 as of the last census, and apparently less than 300,000 today.

The advantage a market like Phoenix has in the long run, despite the sharp declines in housing, is the potential for more affordable housing because of the unrestricted capacity to build and expand.