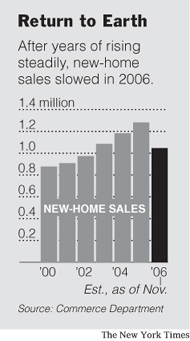 Before we get all excited and hope for some sort of near term national housing rebound, please take a look at Daniel Gross’ A Phantom Rebound in the Housing Market [NYT] [1]. His MoneyBlog [2] is a daily read for me.

Housing market hopefuls were uplifted by the Commerce Department’s 3.4% increase in purchases of new one-family homes. In fact, I grew annoyed because new home sale stats are very misleading [3] and to place hopes on a housing rebound based such a flawed statistic, is a waste of energy.

The FOMC [4] piled on to the optimism by saying:

“Sales of new and existing homes showed tentative signs of stabilizing, although at levels well below their mid-2005 peaks,” the Federal Reserve’s Open Market Committee said at its December meeting.

Dan’s article points out something that makes the Commerce Department look even more statistically challenged.

If a contract to buy a home, signed in November, is canceled in December, the Census Bureau does not subtract the failed transaction from the number of sales, or add the house back to its inventory total. In the last year, as the housing market has cooled, the volume of cancellations has risen to epidemic proportions.

In fact NAHB [5] estimated that in November 2006, cancellations constituted 38 percent of gross sales, compared with 26 percent in November 2005 and about 18 percent in the first half of 2005. This means that 150k to 200k homes are being counted that never got built.

In their nearly always pessimistic outlook, but very insightful market commentary by Commstock Partners this week Don’t Believe the Hype on Housing [6], they define the generally inferred housing bottom as a

…a triumph of hope over reality.Â  Almost everything we see indicates that housing is still in a decline that has further to go.

It seems that as far as new home sales go, demand may be less than it seems. Of course before we write off the housing rebound completely, new home sales only accounted for 14.4% of all housing sales (annualized) in November.