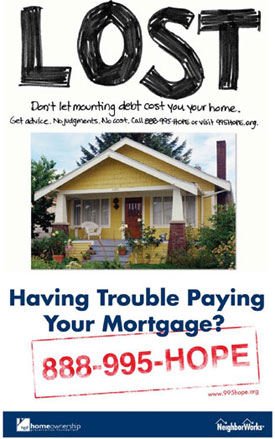 Foreclosure counseling is becoming a growing industry [1] in the post-housing boom world.

Well, the federal government was the last to the party, but now seems to be trying a full court press to show compassion to those who are in danger of losing their homes [2].

On a visit to a New Jersey counseling agency Friday, Mr. Bush stood with homeowners who have benefited from the administration’s programs, including its Hope Now referral service. “We will help responsible homeowners weather a difficult period. And in so doing, we will strengthen the dream of homeownership.

The irony in his actions is that the White House and republicans are trying to stop the Foreclosure Prevention Act [3] being pushed by democrats.

Giving out a wrong number…twice

President Bush gave the wrong number [4] for the administration’s “Hope Now Hotline” as 800-995-Hope (it’s 888) for foreclosure counseling back in December 2007.

Who says there is no disconnect between the housing market and the federal government?