With any significant unexpected and historic event, the initial impact to housing can be seen in the form of a “pause” until buyers have enough time to process it. I first wrote about my “milestone” theory more than a decade ago [1]. There was a New York Times cover story a month after Lehman collapsed in 2008 [2] that used our data to mark such a milestone. A “pause” can be measured in days or months and market reaction can ultimately go against conventional wisdom.

Back in August of 2011, after S&P downgraded U.S. debt ratings [3], it was thought to be catastrophic to the U.S. economy yet the world’s investors flooded into U.S. treasuries for safety, pushing interest rates to the floor, ultimately giving a boost to housing.

I may not know much, but I do believe this: potential changes in government social policies should be kept separate from potential changes in economic policies [4], otherwise it is impossible to take action on anything in your life. This probably includes making decisions about whether to buy or sell a home. This U.S. election campaign has been brutal and at this point we don’t know how much of what was said about social policy will be enacted. This uncertainty may keep some buyers on the sidelines longer than others, but otherwise I’m not sure any of that matters to the housing market. On the margin, I am hearing that a few buyers have placed their purchases on hold. This is a normal reaction after a significant historic event but eventually many of those participants wade back into the pool when they are more comfortable.

Stock futures were down significantly overnight but the financial markets moved higher after initially falling. With a quickly rebounding stock market, I’m don’t think home buyers will take very long to decide whether to rejoin the housing market.

In addition, the odds of a December interest rate increase by the Federal Reserve dropped sharply despite yesterday’s view of a rate hike as nearly a sure thing. The president elect’s economic platform [4], which was not widely discussed during the campaign, proposes a large tax cut [6] and investment in infrastructure [7] which are either favorable or neutral to the housing market. 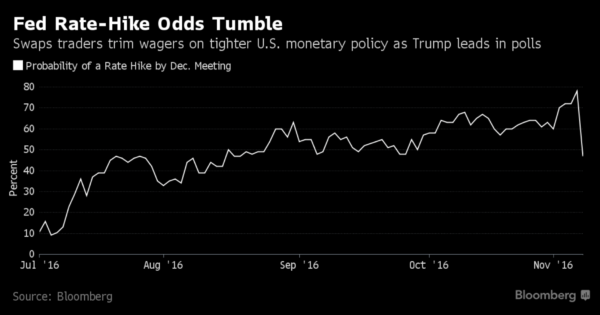 Before the election, the housing market was generally softest at the top over the 18 U.S. markets we cover. I believe inventory will continue to be more readily available at the higher end than for other segments. In New York, the slow down in sales was assumed to caused by the pull back of foreign buyers. However this decline was equally matched by domestic buyers over the same period, so the foreign buyer decline has been a false narrative. The sales share of international buyers has remained stable for for nearly 3 years [9]. I am speaking at the The Real Deal conference in Shanghai [10] next week and will look to understand sentiment towards further U.S. real estate investment. 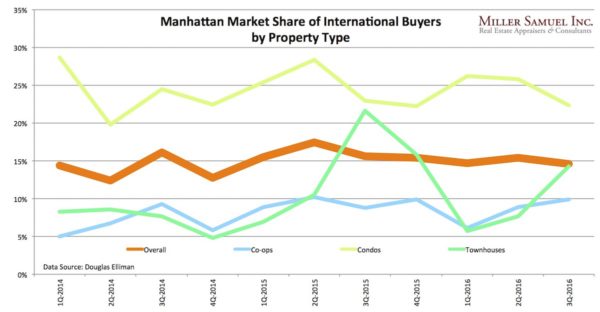 Rather than the international buyer narrative, I attribute the New York sales slow down to the visceral view of new residential towers rising from empty lots. Construction lending nearly dried up at the beginning of the year so the pipeline will slow quite a bit over the next two years.

With world economies generally falling or remaining weaker than the U.S. economy and the continuation of near record low interest rates, I don’t see much impact from the U.S. election results after the short term jitters pass.

Of course, I was wrong about the election.