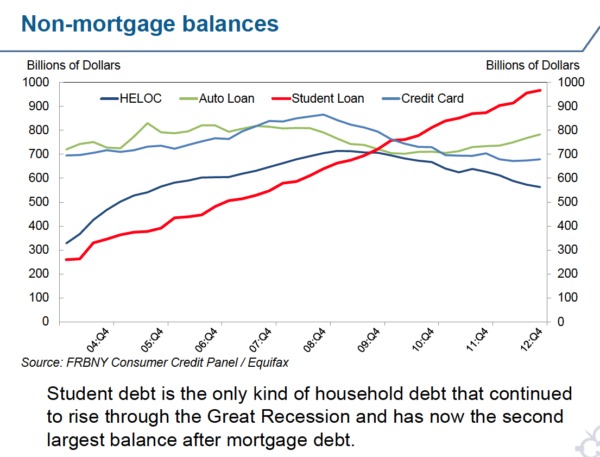 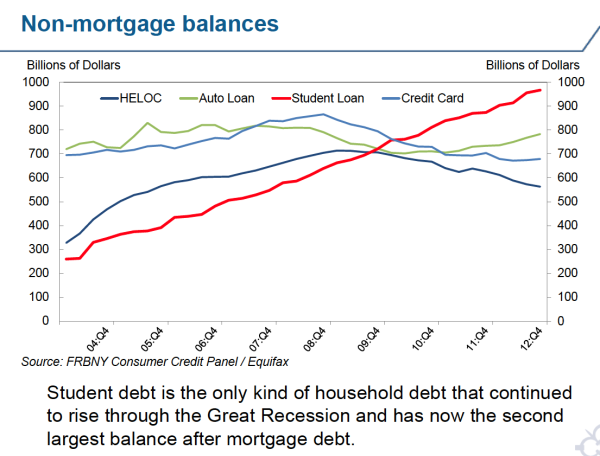 I like to say that we never had a housing bubble in the US. It was a credit bubble with a housing as a symptom. The same credit bubble logic applies to college costs which have run unchecked well past the housing bubble “pop” in 2006 and the great recession.  Lately there has been discussion on the student debt crisis by economists and financial journalists [2] that the phenomenon is overhyped – which prompted this post as a college tuition paying parent.

College costs for a 4 year degree are growing at a rate of about 5% [3], well above inflation. Access to credit has remained easy for students and parents to obtain so there are no real checks and balances (no pun intended) on college costs. Demand is high as students and their parents often fight to gain admission and can worry about paying off the debt later.

It’s been widely discussed that anemic household formation is holding back the housing market [4] and the economy [5] from fully recovering, that student debt has been the key culprit in holding back young people from striking out on their own, resigned to live at home until their finances get better. Speaking as a parent who just finished sending a son through college with more on the way, it’s a hard reality for parents too.

I was standing on the platform the other day waiting for a delayed commuter train (hey, it’s Metro North, who else [6]) and struck up a conversation with a woman who was lamenting about all the debt she and her husband incurred sending their 4 kids to Ivy League schools – only for them to be unable to find a job in their chosen profession or find one that pays a living wage – these factors are often mutually exclusive.

Parents that borrow heavily [7] to finance their children’s education is the sort of thing that is missed in economic data because that debt is in some other form of a home equity loan or other debt.

“Parents are facing an economic crisis because they are borrowing too much for college,” says Rick Darvis, executive director of the National Institute of Certified College Planners. “They’re sacrificing their current lifestyle and robbing their future retirement.” The rising levels of parental debt could ripple through the rest of the economy. By the time parents are in their 50s and 60s, they should be saving for retirement instead of taking on new liabilities, says Joseph S. Messinger, a certified college planner and president of Capstone Wealth Partners in Columbus, Ohio.

We are seeing financial coping strategies emerge like going to a community college for 2 years to save money and transferring to a better school for the remainder – or questioning the value of college all together. The cost/benefit of a college degree is being called into question because of the combination of spiraling costs and tepid job opportunities for many in the current economy.

The baby boomers have taken on significant debt to finance their children’s education. Sure the average student debt is $25k [8] to $29K [9], the cost of a new or used car, but I contend a large portion of college debt is in the shadows born by the parents. 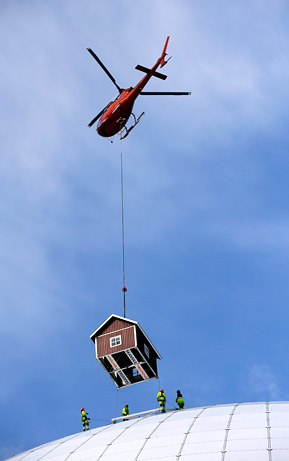 The average cost for a 4-year degree is about $23K [11](blended cost of private and public) which suggests that the debt would only cover about 80% of the cost of first year. This would imply that more than 3/4 of the cost of a 4-year degree was paid in cash through savings and working during the four year period. That doesn’t seem plausible to me – actually it seems ludicrous. Parents have to be paying  cash or taking on an inordinate amount of debt to pay for the other 75% of the cost that doesn’t show up in the school related debt numbers.  How common is it to see parents in our helicopter nanny state shoulder little to no financial burden for their children’s college educations? No matter the demographics, I contend it’s quite rare.

And how does this impact the US housing market recovery?

The tepid economy has exposed the problem – and the heavy debt loads could provide a drag on housing for an extended period of time.