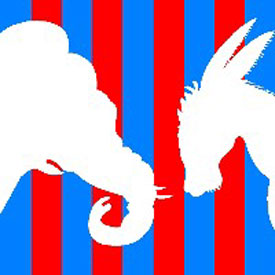 Whatever your political persuasion, the housing industry is moving through politics like a freight train these days.

And why not? Housing is a key source of employment, wealth, taxes, consumer spending and personal identity in the US. The cynic in me strongly believes that the average citizen votes with their wallet. Well, the wealth effect associated with a weaker housing could make for a higher voter turnout next year (ok, ok thats a “glass is half full” political forecast).

Andrew Leonard’s The politics of home price depreciation [1] in Salon.com that addresses the subject.

A key idea in the article is that the exurbs (beyond the suburbs) have been the bastion of new housing development championed by the current executive branch, yet those areas are among the hardest hit by the housing market slowdown. This housing-politics link resonates with me because of all the recent politics associated with housing: