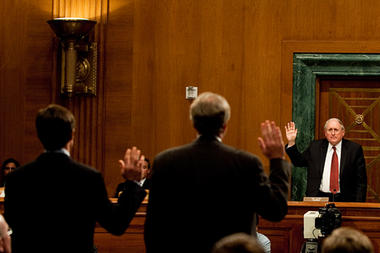 Admittedly I am getting annoyed about the lack of closure on this credit crunch thing. Can’t we simply point fingers, have someone apologize but indirectly deny responsibility [1] and then we can then get back to buying stuff and building extensions on our houses?

Make no mistake, the credit crunch is one big mistake. It’s called a systemic breakdown because so many in the economy played a role in our economic demise. Moral hazard, government backstops, bailouts, stimulus, bonuses, trillions, synthetic CDOs have been placed in the forefront of our thinking.

But no clear financial reform path is being taken – in fact it took an investment bank using swear words in an email [2] to get Washington’s attention and break the political maneuvering. Each party is planning to oversteer the solution to their agenda which was part of the problem that lead to this crisis. While we all worry about “free markets” we have forgotten how important it is to create a level playing field. Without rules, free markets degrade to chaos and lack of investor participation. We are seeing this now within the secondary mortgage market, especially jumbos.

We can never remove the human factor from the problem since regulators were clearly asleep at the switch (since Clinton) compensation had perverse incentives favoring short term profits over long term viability, regulators were neutered by the prior administration (think prior SEC under Bush) so its dumb to have some sort of czar. It’s never one factor – it a combination of people, events, institutions and politics that light the fuse.

I am looking forward to some sort of meaningful financial reform. If neutrality isn’t baked into the system [3], then this is all a big waste of time. Regulators need authority and can not be influenced and investment banks can’t pick the regulator they want. Rating agencies should not be paid directly by the investment banks whose products they rate. Appraisers can not be fearful of their livelihood because they don;t hit the number, etc.

Here’s what it all boils down to now: blame and being sorry.

Blame
Another Jonathon Miller (no relation, but awesome name) and his wife are suing a large builder for not preventing flipping in their housing development which brought in “irreverent transients” who party loudly, park erratically and install unauthorized satellite dishes. [4]

I’m not doubting those conditions exist and it appears to be a creative way to get your money back.

When the housing market collapsed, some contracted buyers abandoned deals. From the outset, the project exhibited “ghost-town-like” qualities, the suit says.

Looking back, the Millers say the developer should have worked harder to prevent so-called flippers from buying units. Buyers were supposed to stick around for at least 18 months.

“Personally I don’t see my role as … to obtain apologies. What I don’t hear is a sense of responsibility and self-assessment about what occurred. There seems to be a disconnect between the practices that people undertook and the financial collapse,” he said at the Reuters Global Financial Regulation Summit.

“I’m struck by the extent to which all fingers point away generally from the person testifying,” Angelides said.

When it gets to this point, its too late. Let’s try to be proactive with some sort of meaningful financial reform. Not more regulation, not fewer protections for neutral parties.

If we can’t do this as a country, well, don’t blame me.