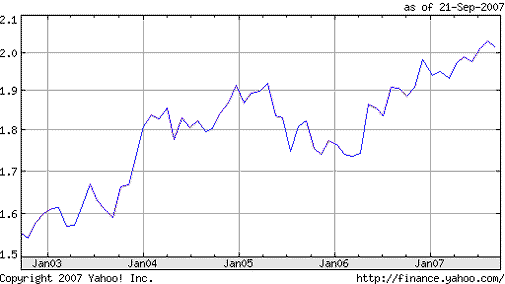 Coverage of the weak dollar [1] as it relates to real estate is now front and center. A page 1 story in the New York Times yesterday Dollar Remains at Low Ebb [1] laid it all out.

Until a few years ago, my family and I would go skiing over Christmas break every year to either Mont Tremblant [2] or Mt Orford [3] in Canada. It felt free (and cold) because the exchange rate made the cost about 1/2 that of going to Vermont. With 4 sons, 3 of whom are teenagers, the food costs alone were staggering (important note: Kentucky Fried Chicken (KFC) in Quebec is known as PFK [4].)

Now, the exchange rate between US and Canadian dollars are at parity [5]. The exchange rate with the British Pound is two to one [6] and the Euro is 41% higher than parity [7].

On Wednesday, I posted (after a 2 month hiatus) my Three Cents Worth column on Curbed [8] which specifically addressed the weak dollar. Because of my Curbed chart, I was interviewed on the WNYC’s The Brian Lehrer Show yesterday. The segment was called: Following Up: Are Foreigners Propping up House Prices? [9] Note: The interview starts at the 3 minute mark.

Also on Friday, a portion of the text [10] of my radio interview on BBC News Worldwide [11] was published on their web site in Investors see Manhattan as a safe haven [12]. Here’s the web page [10]and the audio version [11]. From some of the commentary made by the other guests, you can hear the front line observations and confusions about the impact of the weak dollar.

Will we ever get change back from our dollar?