One of the remarkable things about the Fed’s recent monetary policy was that they opted to deal with the housing market first, and then inflation. Prior to the credit crunch summer of 2007, the fed was concerned about the economy overheating. And then it realized too late that the housing market was likely to be the proverbial straw that broke the economy’s back.

The end result? The sharp drop in the federal funds rate since last summer has done nothing for the housing market. It’s all about credit or lack thereof.

Now the concern going forward is inflation [1], which is sure to occupy the conversation for the next several years.

Inflation is a rise in general level of prices of goods and services over time. Although “inflation” is sometimes used to refer to a rise in the prices of a specific set of goods or services, a rise in prices of one set (such as food) without a rise in others (such as wages) is not included in the original meaning of the word. Inflation can be thought of as a decrease in the value of the unit of currency.

Today’s “Producer Price Index numbers show a sharp increase overall [2], but mild increase on core (excluding food and energy – which is a mystery to me in its relevance beyond academia since consumers eat and buy gas.)

The Producer Price Index advanced 1.4 percent in May, its fastest pace in six months and another troubling sign that inflation is worsening, the government said Tuesday.

Many economists, however, prefer to measure price increases in products other than energy and food. While this gauge, called the “core” index, does not measure the full effect of inflation on Americans, it does offer a guide to how long inflation might linger. For May, core producer prices rose at a tepid pace, 0.2 percent, in line with economists’ expectations.

What does an inflation threat mean to housing? It likely means higher mortgage rates (they are rising now [3]) which will slow down the recovery.

The Fed Chairman ascribes to “inflation targeting” which basically says that if inflation rises above a set level, the rate is raised, no matter what the source. Here’s an interesting paper on why inflation targeting doesn’t work, called, oddly enough: The Failure of Inflation Targeting [4]. Quite often the source of inflation, such as food or oil, is imported and beyond the control of a country’s government.

Elizabeth Spiers of Fortune Magazine wrote an interesting piece called The great inflation cover-up [5] which examines the disconnect between reality and CPI. Many of us are seeing rising prices first hand (I paid $4.99/gal at the pump last weekend) and yet the CPI stats reported seem very mundane. This theme seems to go along with many “national” housing stats like housing starts (released today) and existing home sales. There is a real disconnect between how information is reported and what the consumers “on the ground” experience is. Possible explanations:

Paranoia – absolutely real and I am guilty as charged. Bring on the “red light” theory. You only remember how many red lights you hit while driving your car.

Reliance on core inflation – eliminates short time volatile components like food and energy. Inflation is inflation in my book. When we say core inflation is tame and I am paying $4.99 for gas, its simply a misleading indicator for consumers.

CPI simply isn’t accurate – There are some schools of thought that CPI overstates inflation. ergo the 1996 Boskin Commission and some feel its significantly understated (saves the Feds on social security increases and the conversion to “rental equivalent” for housing in 1983 makes me, well, paranoid.)

Pollyanna Creep Economy
And while we are talking about accuracy, inflation could very well be much higher. Here’s an interesting Harper’s article from last month’s issue called Numbers racket: Why the economy is worse than we know [6] (Free version [7]). The article pokes holes in the alphabet soup of indicators such as CPI, GDP, unemployment, etc. and references a web site called ShadowStats.com [8] 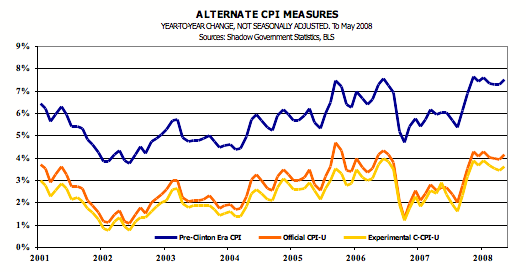 So what’s the point to all this (besides using up my collection of inflation articles I was saving for a rainy day and it’s sunny out right now)?

If we are trying to restore investor confidence in the credit markets, it is tough not to be disillusioned by the growing awareness of the lack of statistical accuracy available to consumers (and the assumption that these figures are also relied on by fiscal policy makers). I relate this first hand to my appraisal profession where I am struck by the fact that banks actually read the appraisals that are submitted to them now versus a few years ago, when nobody cared about the reliability of valuation.

Speaking of paranoia, we now know that using IM is more efficient than email [11].