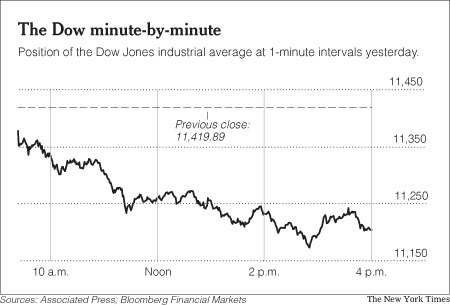 Investors, real estate investors and consumers have all been scratching their heads lately. Everyone is looking at short-term inflation pressures and contradictions in data and wondering what affect that will have on the Fed’s next move.

Just two days ago, a falling dollar and weakening housing market suggested the Fed might pause and not raise rates at the next FOMC meeting [Bloomberg] [3] causing worries high commodity prices could slow the global economy. Oil prices have trended downward recently [Forbes] [4]. Core inflation was tame, posting a 0.1% increase in April and lower than expected and housing starts dropped 7.4% last month and down 20% since January.

So which is it? Depending on the report you read, inflation is looming or it isn’t. The Fed will continue their policy of measured increases or they won’t.

The Fed has basically postioned itself to wait an see what the data tells them between now and the next FOMC meeting. So we get day to day changes in the interpretation of the state of inflation. The uncertainty of whether mortgage rates will continue to rise places further pressure on the housing market.

The mixed economic reports [AR] [5] should give the Fed a lot to think about.

The stock market seemed to show belief that inflation was not built into pricing yet. Even the zen-god of the bond market, Bill Gross of PIMCO changed his forecast [Globe] [6].

The takeaway from this economic stat chaos is that despite stronger consumer pricing, housing market participants are unsettled. It would seem to me that the impact of a weakening housing market has not impacted inflation data yet.

The economic repercussions of a weakening housing market is a significant economic unknown and additional rate increases will expose further weaknesses, compounding the problems. I remained concerned that inflation is more of a catalyst for a slowdown (in a weird twisted way) rather than a long term condition of an over heated economy.

Cart before the horse.