There has been a lot of discussion of homeownership rates and demographics lately. It has been of even more concern as the recent housing boom makes the transition to a more balanced market, and then we ask, whats next? The idea is that the mix of the population that is growing is more indicative of future housing needs than an overall growth rate or totals. Here’s a lot of info to digest but its good reading.

Homeownership Rates
In Berson’s Weekly Commentary Homeownership rates this decade are up most for the youngest age groups [Fannie Mae]. [1] Warning: Berson’s link lasts one week. For an acrhive of stories including this one go here. [2]

Younger Generations Expect Higher Income
Last summer’s article A simple model of the housing market [3] by the Federal Reserve Bank of San Francisco looked at age distribution of homeownership and the elasticity of demand.

Even as discussion of the current run-up in house prices points to the extremely favorable demographic conditions for demand, little has been said (lately) about what will happen once these demand conditions ebb. The worst-case scenario for house price declines depends on three factors: an inelastic demand for housing, a fair degree of myopia when forming expectations, and an inelastic supply function. However, recent research in urban economics suggests that two of these factors—expectations formation and the supply response—are probably more flexible than once thought.

Basically the study concluded that:

The effect of the exiting baby boomers on house prices would be gradual, and the overall magnitude of price changes would not be great.

Furthermore, a negative demand shock like the aging and exiting of baby boomers is only one of many factors to consider in anticipating the future of house prices. The productivity gains in the 1990s can be viewed as a positive demand shock. To the extent that younger generations now expect higher permanent income, this increase in expected wealth should help support house prices.

Age And Mix Of Population More Important Than Total Growth
In this 10 year old USC School of Urban Planning and Development article Real Demographics of Housing Demand in the United States [4] population growth has always been recognized as a primary force driving demand, but the new recognition has centered on the ages of potential home buyers–not simply their numbers. Ethnicity, family type, and immigrant or native-born status are also factors to consider, but the age of the population remains the single most important aspect of demographics.

NYC Forecasts Surge In Population
In fact, city planners in NYC expect the population to continue to rise by another one million people over the next 20 years [NYT]. [5] With the suburbs at capacity, urban areas are not at the same competitive disadvantage as in years past. 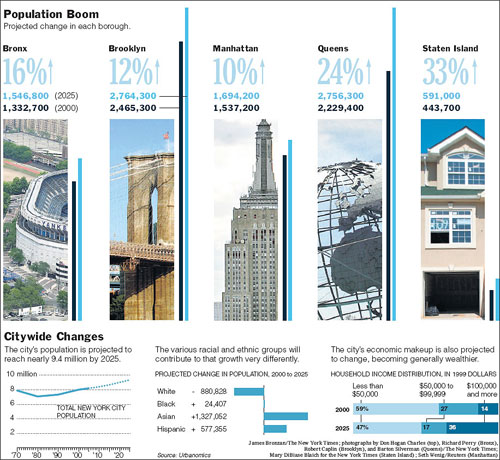