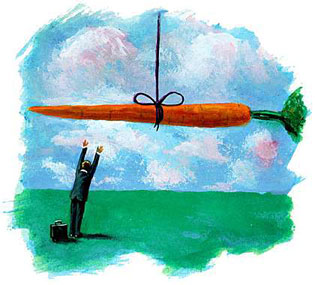 Many markets have a primary industry that influences their respective housing industry. In Redmond, its Microsoft; in Detroit, its the Big 3 [Detroit News] [1] and in Manhattan, its financial services and their associated bonus income [NYT] [2]. Wall Street accounts for roughly 6% of the city’s jobs and 20% of its personal income. Bonuses typically account for more than 50% of personal income in much of the sector. Its always played a significant roll in the real estate economy, good or bad.

When the New York State Comptroller announces the bonuses paid every year, its already old news. Most people know, or have a sense of knowing by the second or third week of December how much their bonus will be.

There has been a lot of discussion about whether this year would be different, that Wall Streeters would not invest, despite the record bonus money that would be paid out.

Early indicators point away from the naysayers, but the jury is still out. Most of the CEO’s of the Manhattan based real estate brokerage firms I have spoken with indicated that they saw a surge in sales activity starting immediately after Thanksgiving, a few weeks before the bonus amounts would be known. Our firm saw a significant up tick in the number of sales that we appraised in October and a surprising number of $20M+ purchases were made.

My first reaction was that this was simply pent-up demand from two consecutive quarters of fewer transactions than we saw in the first half of the year. I expected the the number of sales to drop off after the first of the year.

We are seeing an elevated level of sales activity across the board, not just at the high end. Its not clear if this is a short term blip or not. Long term mortgage rates have been trending down since mid-November [Bankrate] [3], possibly setting the stage for a more favorable real estate mindset in the first few quarters of 2006.

However, don’t expect an official announcement about that.

[Webmaster’s note: I’ve been a little light on the number of posts I have presented over the past few days. Its all Inman’s fault. I have been attending the Inman conference [4] this week and its really been refreshing. I enjoyed being there for no specific reason other than a lot of new ideas and products, great information and a whole lot of smart people (self excluded). I’ll be back on track Tuesday, after all, its a long weekend. jm]