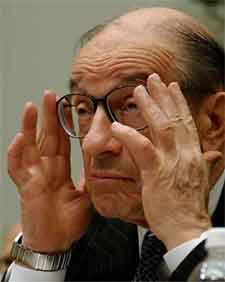 Greenspan is not the Fed Chairman anymore but whatever he says still carries a lot of weight.

Greenspan, in his first public U.S. speech since retiring in January from a storied tenure leading the Fed, predicted there is no danger of a total collapse of the housing market [SeattlePI] [1].

Greenspan said he doesn’t see home prices falling on a national basis, but instead in certain areas of the country. He warned reduced access of Americans to equity loan extraction would have an economic impact, which has had an “important effect” in stimulating the economy.

His based his comments on the fact that sales volume and mortgage applications are down.