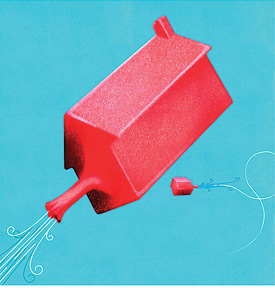 Your House Is Worth Less? Good [1]

we get lectured on how no one benefits from rising housing prices except for the elderly. Its a surprisingly simplistic take on the housing market problem (albeit commentary) from a national publication, and I guess thats the problem in general. No one really seems to have their arms around whats wrong with the housing market.

Some, mostly young folks, are trying to buy their first home. Some, at various stages of midlife, own a home but will trade up someday, or at least think about it. And some, mostly older, are trying to sell and downsize. Who is served by soaring house prices? Not the first group: rising prices make it hard for those people to get into the game. Not the second group: what it will have to pay for a bigger house is probably increasing faster than what it can get for the current one.

The author indicates that a real estate collapse could be a good thing:

People want the government to do something, and presidential candidates are beavering away at plans. But any plan that would prevent home prices from declining would be foolishness squared. Genuine tragedy deserves sympathy and help, even if it is the result of your own foolishness. But when we do not even guarantee basic health care, it would be nuts to think about making protection against real estate losses part of the social safety net.

I don’t think it is the government’s charge to rescue investors who made poor decisions. Of course, fraud is another story. Let the markets decide. I think thats why Bernanke waited so long to take action before the rate cut and gave the impression of waffling on whether or not to take action. He was hoping the markets would figure it out, and maybe they will.

However, bad choices or not, fraud or not, the housing problems are spilling into the overall economic picture, which for goodness’ sakes, many of us have been saying for more than a year. Much has changed over the past month with the mortgage market turmoil.

I now think the Fed has no choice but to lower the federal funds rate and the markets are predicting it [2]. It probably won’t have any near term affect on mortgage rates, but will help the other areas of credit. A recession is no one’s friend.