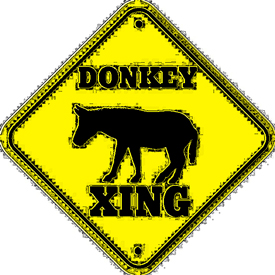 Matrix is the blending of economics, real estate and of course, farm animals. Here’s the latest low-brow explanation of how the bailout works, as passed around that series of tubes [1] (Hat tip to Marty [2]).

Young Chuck moved to Texas and bought a donkey from a farmer for $100.
The farmer agreed to deliver the donkey the next day.

The next day he drove up and said, ‘Sorry son, but I have some bad news, the donkey died.’

Chuck replied, ‘Well, then just give me my money back.’ The farmer said, ‘Can’t do that. I went and spent it already.’

A month later, the farmer met up with Chuck and asked, ‘What happened with that dead donkey?’ Chuck said, ‘I raffled him off. I sold 500 tickets at two dollars a piece and made a profit of $998.’ The farmer said, ‘Didn’t anyone complain?’ Chuck said, ‘Just the guy who won. So I gave him his two dollars back.’