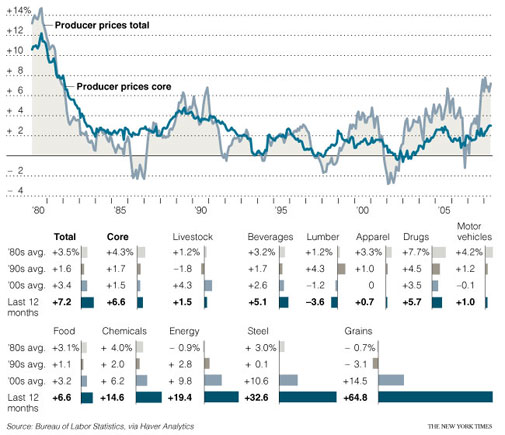 In this week’s Off The Charts column, Floyd Norris talks about how inflation has now become the key point of credibility [2] for the Fed. Conventional wisdom says the Fed won’t raise rates in an election year so you could see an aggressive stance in the late fall.

It still seems unlikely that the Fed will actually raise rates in an election year when the economy is probably in recession. But the surprisingly strong increases in producer prices for May, reported by the government this week, increased the pressure on the Fed at least to sound tough about inflation.

In other words, the economy is weak and the Fed can’t raise rates or it will hurt the economy so they need to talk a tough line. A real rock and a hard place [3].

Unable to raise rates because of a fragile economy, policy makers have to resort to jawboning.

It’s not that they’re insincere about resisting “an erosion of longer-term inflation expectations,” as Federal Reserve Chairman Ben Bernankesaid last week. It’s just that they would prefer not to have to do it now, especially when they expect inflation to recede as demand weakens. 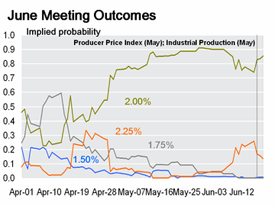 After a brief expectatio [4]n of an increase, the Fed is likely to keep rates the same [5] this week at the FOMC meeting.

And those expectations, if proven wrong, will eventually converge with reality.

And reality is that the Fed can only assure the credit markets by projecting an image of control. So, despite the severe problems with credit on a global scale, tackling the inflation risk has taken usurped credit risk [6] as the productive course of action.

Indeed, if growth slows, people are not likely to eat less rice or corn. And if they have less money to buy new fuel-efficient cars, they will be more reliant on gas-guzzling clunkers.

Why can’t central bankers distinguish structural problems from general overheating? If your only tool is a hammer, everything looks like a nail. But a deliberately engineered recession will only increase economic suffering.

I love the hammer/nail analogy, in fact I picked up the hammer and saw (sorry).

And finally, there is a difference between managing risk and managing volatility [8].

RISK management, then, should be a process of dealing with the consequences of being wrong. Sometimes, these consequences are minimal — encountering rain after leaving home without an umbrella, for example. But betting the ranch on the assumption that home prices can only go up should tell you the consequences would be much more than minimal if home prices started to fall.

We’ve known that the Fed would have to deal with inflation (The Rock) after it dealt with the credit crisis (Hard Place). Unfortunately, the aggressive rate reductions have not resulted in lower mortgage rates to help easy the housing market pain being felt in many markets.

Improvement in the credit environment will have to wait. Anyone up for Rock, Paper, Scissors?