To be sure, the FOMC made sure to keep up appearances by mentioning its concern about inflation. They’d be drummed out of the central bankers’ club if they didn’t. “Readings on core inflation have been elevated, and the high levels of resource utilization and of the prices of energy and other commodities have the potential to sustain inflation pressures,” which the FOMC cut and pasted from its Aug. 8 directive…

It’s clear why inflation is off the Fed’s worry list. But why does housing top it? It’s not just that the Fed inflated the housing bubble (which it did) to offset the effects of the bursting of the tech bubble (which it also blew up.) It’s that housing busts hit the economy far harder than equity collapses.

This is consistent with international housing busts based on a study by International Monetary Fund in 2003 [pdf] [2], that Mr. Forsyth cites, for the following reasons, housing market corrections: 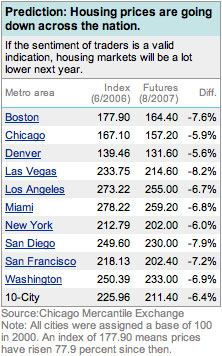 The CME Housing Index seems to support the argument that housing prices are going to decline. [CNN] [3] Trading results were consistent to the actual index for August suggesting some predictive abilities of housing prices, even though the trading volume is too thin to be fully reliable.

Robert Shiller, whose company developed the index, suggests that the index would likely exagerate the decline somewhat due to the risk premium considered by the investors, since they are investing for their opwn protection, not for the local housing markets.