The data tables [1] on our web site MillerSamuel.com [2] are now (finally) current. You can build custom tables of all the aggregate market data we have been including in our market report series [3] going back to 1989. 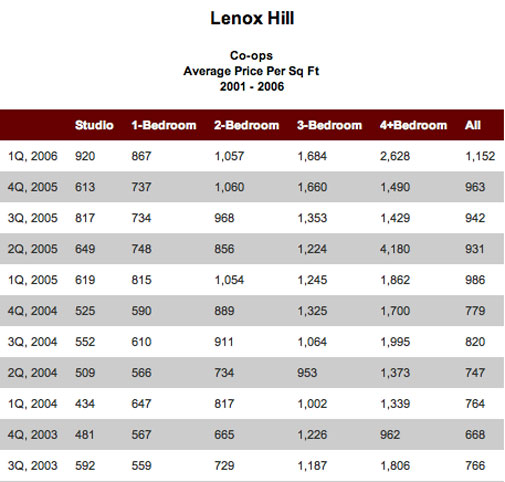 _Background on this that is pretty trivial_
Since 1997 when we launched the site, I had been diligent about keeping the data current until Q3 05 when, I had a grandiose idea to make some internal changes to my web site and alter the way my aggregate data was to be presented. Of course, I had 17 other seemingly grandiose ideas and this one eventually took a back burner position. During this time, I failed to have the aggregate data section of my web site updated after Q3 05 – I was simply overloaded.

I kept thinking… next week …but next week never came.

Over the past 3 months, I was averaging about 2 requests per day from pension funds, REITS, commercial banks, hedge funds, bond traders, government agencies, investors as well as individuals from around the country asking for the specific data for Q4 05 and Q1 06 to be placed in the data section of our site. I had failed to appreciate how much people were depending on the information.

The requests ranged from the very nice to the downright nasty/entitled. The latter all the more surprising since this is a free service, for now anyway [wink]. Its amazing how much more information you can get when you are simply polite and respectful.

The second quarter is nearly upon us.