McMansions entered our vocabulary in the 1980’s. Wikipedia defines the housing term McMansion [1] as:

As seen in the Smithsonian! 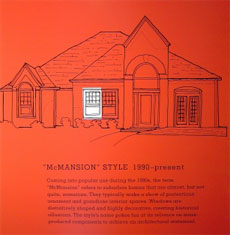 A typical McMansion as depicted by the National Building Museum in Washington D.C.

Caption reads on image:
Coming into popular use in the 1980’s, the term “McMansion” refers to suburban homes that are almost, but not quite, mansions. They typically make a show of pretentious ornament and grandiose interior spaces. Windows are distinctly shaped and highly decorative creating historical allusions. The style’s name pokes fun at its reliance on mass produced components to achieve an architectural statement.”

It has the connotation of a large bland structure, generally found on a small lot.

McMansions have become an issue with zoning due to excess lot coverage, the are often the only one of their kind on a street and are usually out of scale and inconsistent with the architecture of the existing housing stock.