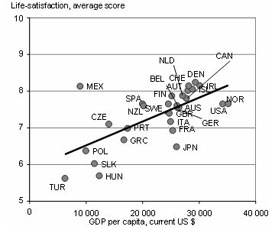 [Economists have been trying to quantify happiness](Truck and Barter](http://truckandbarter.com/mt/archives/2006/06/the_hedonic_tre.html) or well-being in numerical terms for years.

The housing wealth effect [1] has been one of the more important linkages between the housing market and consumer patterns in the current economy.

Can we infer that the more propserous a household is, the happier it is? (I can imagine a huge swath of the population shaking their heads “NO!” to that comment.) I do a lot of real estate consulting in divorce cases and I KNOW this to be a false statement. 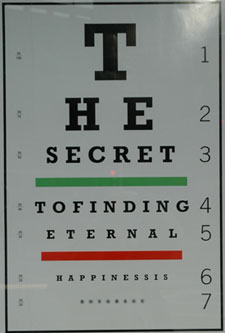 So lets back up. Rather than prosperity, lets say we associate well-being [2] on national basis with GDP and see if that ties into housing.

The OECD report showed there is a correlation between GDP and leisure time [OECD] [4]. They looked at a large array of countries and interviewed residents about their happiness and charted it against their nation’s GDP.

Work may drive growth, but for most people, more free time contributes to well-being, as long as it is not accompanied by lower income. Still, one often-heard remark about the gap in economic performance between OECD countries is that US workers may earn more money but they work longer hours, whereas Europeans prefer more leisure to more work, or indeed, more money, and so are better off.

The authors conclude in their study that GDP, while flawed can be a pretty good indicator of happiness on a country-wide basis.

At the same time, GDP can be correlated with new home sales [6]. I correlated GDP with the New York housing market [7] to the same effect.

Therefore, since housing can correlate with GDP and GDP correlates to well-being (happiness), can we infer that (how we feel about our) housing, affects our happiness?

Sure its a stretch, just like an adjustable rate mortgage thats about to reset.