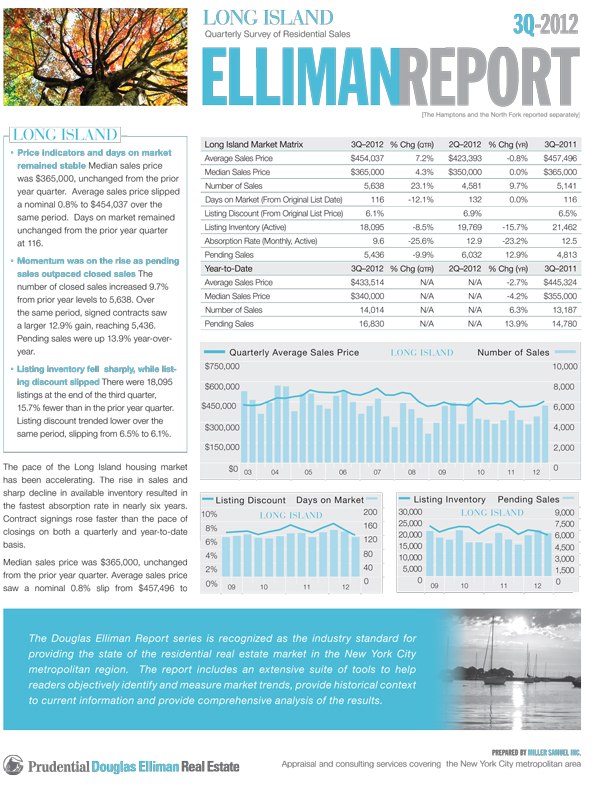 We published our report on the Long Island sales market for 3Q 2012 [1].   This is part of an evolving market report series I’ve been writing for Douglas Elliman [2] since 1994.

…The pace of the Long Island housing market has been accelerating. The rise in sales and sharp decline in available inventory resulted in the fastest absorption rate in nearly six years. Contract signings rose faster than the pace of closings on both a quarterly and year-to-date basis. Median sales price was $365,000, unchanged from the prior year quarter. Average sales price saw a nominal 0.8% slip from $457,496 to $454,037 over the same period. The second, third, and fourth quintiles saw no or nominal changes in median sales price compared to the prior year quarter, while the first and fifth quintiles declined 2.2% and 2.9% respectively over the same period. There were 5,638 sales in the third quarter, 9.7% above 5,141 sales in the same period last year. Pending sales saw a larger gain over the same period, rising 12.9% to 5,436 from 4,813. Year-to-date, these metrics showed a similar pattern, reflecting the expanding activity levels later in the year…

You can build your own custom data tables [3] on the market – now updated with 3Q 12 data. I’ll post the updated 3Q12 charts soon. In the meantime you can browse our chart library [4].