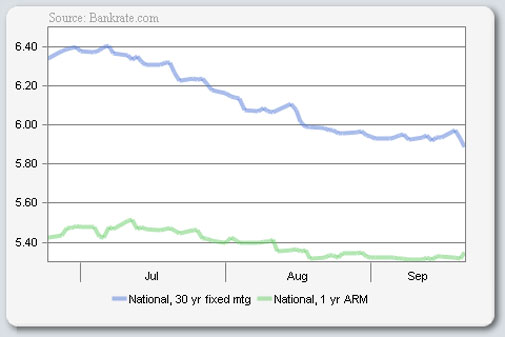 Although mortgage applications are down 22.5% from this time last year [WSJ] [1], they are at their highest levels since April, according to the Mortgage Bankers Association [2]:

The Market Composite Index, a measure of mortgage loan application volume, was 595.8, an increase of 2 percent on a seasonally adjusted basis from 584.2 one week earlier. On an unadjusted basis, the Index increased 12.3 percent compared with the previous week and was down 22.5 percent compared with the same week one year earlier. The previous week was shortened due to the Labor Day holiday.

With mortgage rates trending down over the past 3 months in response to the weakening economy and weaker rates expected in the future, refi activity will likely continue to increase as people who recently purchased or those who are looking at adjustable rate resets [Reuters] [3] will want the best deal. The volume may kick in more significantly if the fed elects to drop the federal funds rate at a future FOMC meeting. 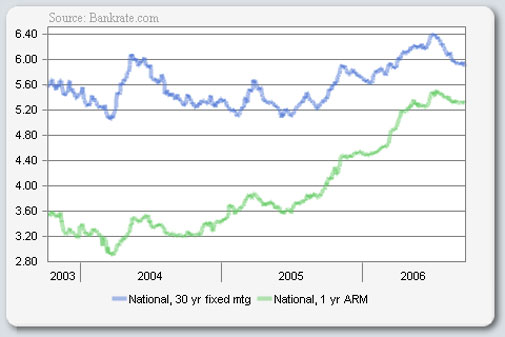 Sales may not benefit as much however, since housing activity toward the end of the housing boom was ignited by low short term rates. Although rates are dropping, its apparent that they have a ways to go before a significant impact on the number of sales is seen. This is evidenced by looking at rates over the past three years.