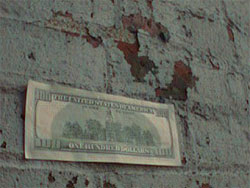 According the Mortgage Banker Association press release [1] mortgage applications fell 1.2% (seasonally adjusted) from the prior week. Those who are regular readers of Matrix know how much a dislike such short time frames for comparative analysis, but lets go with this for a minute.

There has been a lot of discussion about what the magic number is that will break the proverbial camel’s back (housing prices) in the context of mortgage rate levels. For example, if the 30 year fixed reaches 8%, will that be the point at which buyers throw up their hands and give up? I don’t think so. What I mean is, I don’t believe in specific thresholds.

each percentage point increase in interest rates knocks about 3 million potential buyers out of the housing market, including about 300,000 to 350,000 people considered likely buyers.

Thats about 5% of all home sales for each full percent? No way. The swing has to be far greater and depends on how quickly rates move. However, please stay with me on this point.

I have no idea how buyers and likely buyers were distinguished here but the general concept is reasonable. Each incremental change in mortgage rates knocks people out of the market or brings them back in depending on which way rates go. I am sure its not an instantaneous response and I would guess the lag time is less than a few weeks. Less buyers means less competition for listings: equals declining appreciation rates or prices, depending on the market.

_Cash out Refi’s_
One other development that has been caused by rising mortgage rates is the shift toward cash-out refi mortgages. I was surprised by this because I was under the impression that cash-out refi’s were a thing of the recent past (in terms of large numbers).

Rising interest rates on home equity loans are influencing people to refinance in order to wrap them in. Inman news reports today [Subscr] [3] that some 88 percent of Freddie Mac-owned loans refinanced in the second quarter of 2006 resulted in new mortgages with loan amounts at least 5 percent higher than the original mortgage balances. That’s the highest cash-out rate Freddie Mac has seen since the second quarter of 1990.

I think the reason the refi mortgage balances are higher because housing prices generally increased in the first half of 2006 (at below the pace seen in recent years). Property owners refinanced, but who can say it was because they paid off their home equity loans simply because cash out refi volume increased? A 5% increase on the median house price ($220,000 est) would suggest a home equity balance of $11,000. That seems a little low to me but I may be influenced by my New York housing price orientation.