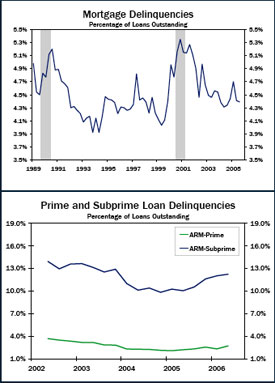 According to the recent press release by the Mortgage Bankers Association Some Delinquency Measures Tick Upwards in Latest MBA National Delinquency Survey [1]:

2Q 06 delinquency rates fell 2 basis points to 4.39% from 1Q 06 and were up 5 basis points from 2Q 05. The decline from the prior quarter was attributed to the surge in delinquency after Hurricane Katrina.

“In previous quarters we indicated a number of factors including the aging of the loan portfolio, increasing short-term interest rates, and high energy prices have been putting upward pressure on delinquency rates. To this point, generally healthy economic growth and labor markets have kept delinquency rates from rising. However, we are seeing increases in delinquency rates for subprime loans, particularly for subprime ARMs. It is not surprising that subprime borrowers are more susceptible to these changes.”

Foreclosure rates, the next stage of the delinquency process were 0.99% in 2Q 06 up from 0.98% in the prior quarter. The RealtyTrac foreclosure rates that are released each month infer much higher foreclosure levels [2] which I discussed in an earlier post. Overall foreclosure rates are still considered low but a weakening economy is bringing additional concerns. 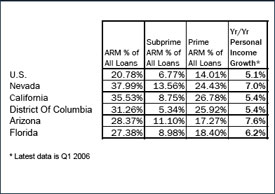 A Wachovia Corporation Economics Group report [pdf] [3] (via FXstreet [4]) suggests that the delinquencies are concentrated in a few states yet the projected income growth in these states is above the national average. The article suggests that the growth in income will temper some of the problems as mortgage rates reset over the next 12-18 months. Since the delinquencies seem to correlate in markets known for investor and flipping purposes, the numbers don’t show a national problem, yet. 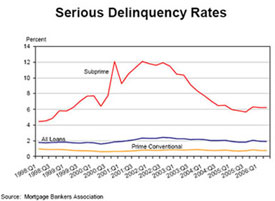 In David Berson’s weekly commentary post, he wonders Mortgage Delinquencies remain low, but will they stay that way? [FNMA] [5]

First of all, the behavior of home prices is an important determinant of serious delinquency rates. If a household has enough equity in a home it could either sell the home or extract some equity, so a delinquency resulting from a negative shock to a household (e.g., job loss, serious illness, etc.) should not lead to a foreclosure. The rapid home price growth seen over the past few years in much of the country should mitigate the risk of foreclosure. However, we expect national home price appreciation to slow this year and next, and some areas of the country could see declines. In those areas, a decline in home prices could leave some households with a mortgage balance significantly in excess of the value of the home. Increases in interest rates that would cause payments on adjustable-rate mortgages (ARMs) to rise sharply relative to incomes could also lead to increases in the serious delinquency rate. While only about 30 percent of prime conventional mortgage originations last year were ARMs, the ARM share was significantly higher in the subprime market. Many of these subprime ARMs have short fixed-rate periods and will be adjusting in the next year, which could lead to rising serious delinquency rates.

I think the overall problems related to the mortgage delinquency rate will be strongly influenced by how quickly mortgage rates move upward. Right now mortgage rates are projected to be stable as the economy continues to weaken and inflation is held in check. However, mortgage rates are already higher than when many adjustable rate mortgages (approximately 30% of the all mortgages) were issued.

Rising personal incomes may serve to contain the problem since the areas with the highest real estate investor concentrations are located in areas with the largest personal income upside. I wonder if good job prospects in these areas helped fuel the speculative characteristics of local markets.