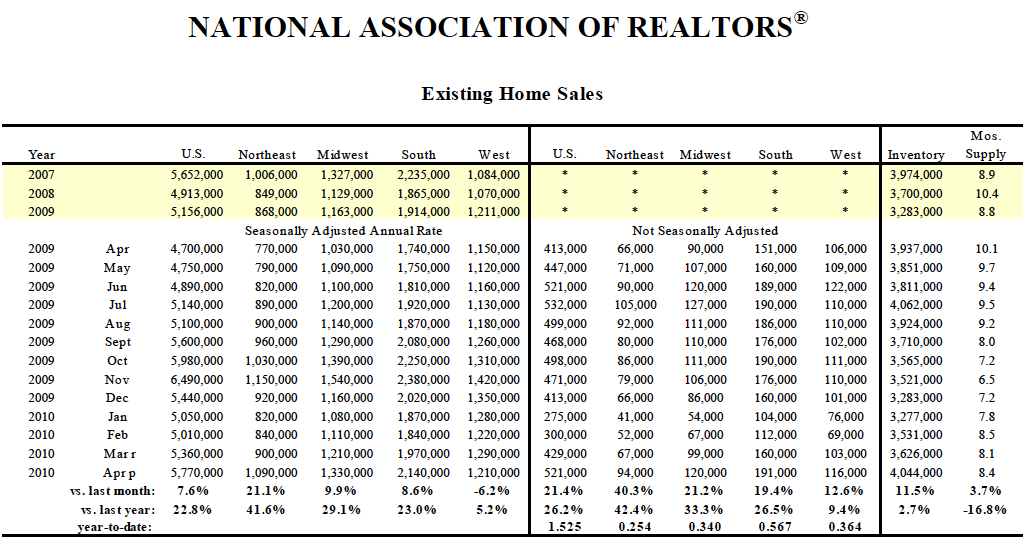 Last month NAR told us that this month would see another period of robust sales activity [2] as buyers sought to beat the expiration of the first time buyers and existing hoimewoners tax credit on April 30th.

NAR was right about the jump in existing home sales [3] this month.

The federal government provided a stimulus [4] to buy homes to help jump start housing and the economy. Pure market forces didn’t deliver the buyers to the closing table this month on their own. What I love about sales stats over housing price stats is sales trends tend to lead price trends. So its a bit weird to say that prices are stabilizing when a key driver of demand was the tax credit – that fueled surge in sales which helped stabilize prices. Remove the stimulus and prices fall.

Lawrence Yun, NAR chief economist, said the gain was widely anticipated. “The upswing in April existing-home sales was expected because of the tax credit inducement, and no doubt there will be some temporary fallback in the months immediately after it expires, but other factors also are supporting the market,” he said. “For people who were on the sidelines, there’s been a return of buyer confidence with stabilizing home prices, an improving economy and mortgage interest rates that remain historically low.”

When sales drop over the next few months, it would be reasonable to expect sales prices to fall too as the artificial stimulus leaves the economy.

Here are this month’s metrics: