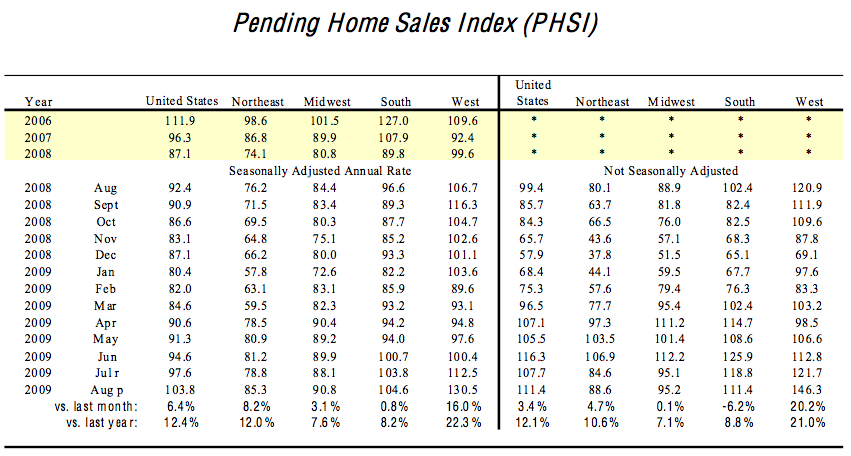 Contract activity another way to track housing trends although it’s reliability is fraught with risk since it is a much smaller data set and therefore subject to skew, especially on a local level. However, on a national level (as far as that goes) it is the only index of this kind we have.

Pending sales of existing U.S. homes rose sharply in August, for a seventh consecutive month of gains, reaching the highest since March 2007, data from a real estate trade group showed on Thursday.

And the NAR press release [3]:

Pending home sales have increased for seven straight months, the longest in the series of the index which began in 2001, according to the National Association of RealtorsÂ®.

[Recommendation to NAR] – contracts are not “forward looking” but rather they are “current looking.” Housing futures indexes like Case Shiller [4] are designed to be “forward looking.” PHSI is forward looking as far as it relates to closed sales but not as a way to predict the future market trend in real terms.

Seven months of m-o-m seasonally adjusted contract sales activity is certainly encouraging, especially because it is an index of sales rather than prices. Honestly, in light of what is happening on the foreclosure front, I am not sure what this run of good news actually infers. br clear=”all”>