Not a month goes by that Larry doesn’t say housing is getting better [1] and that mortgage problems are temporary.

Lawrence Yun, NAR chief economist, expected the sluggish performance. “As noted last month, temporary mortgage problems were peaking back in August when many of the sales closed in October were being negotiated. We continue to see the biggest impact in high-cost markets that rely on jumbo loans,” he said. “Mortgage availability has improved as evidenced by much lower mortgage interest rates and a sharp jump in FHA endorsements for home purchases. 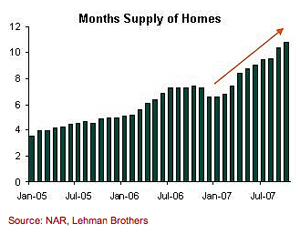 I was wondering what mortgage data Larry is referring to? I don’t believe its part of his research but is a primary basis of rationalization for glowing market conditions, despite the fact that inventory tracked by NAR is at its highest level since 1985 [2] and has continued to rise despite temporary mortgage problems.

Here’s what I said about Mr. Yun’s choice of the word “temporary” last month. [3] Hmmm… perhaps this should be a monthly ritual until he stops using the word. Even then, we can’t be assured it will be temporary.

I yearn for the day when NAR finds that perfect moment and decides to inform the public and the consumer what is happening in the housing market, rather than assume we are illiterate. I know many, many brokerage firms and agents that agree with this. PR driven quotes like this don’t move markets so what is there to be afraid of?

UPDATE: Here’s a related article referencing some of my feelings about this topic in a Business week piece: Northeast Home Prices Remain Strong [4]: Unlike the rest of the U.S., the region has seen price increases for the past six months. But a bad bonus season could change that