The numbers are coming at us at a rapid fire rate but if we don’t stop long enough to think about what they mean, then its all a waste of time. All the information streamed at us is often not interpreted. Thats good, right? Pure raw data. No potential for spin. Better? 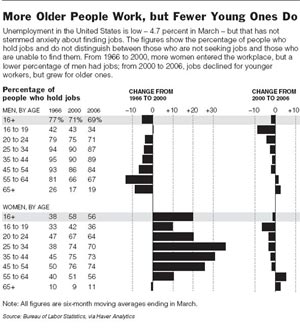 Employment figures are unnaturally low because of the shift in behaviors of certain demographics:

In Floyd Norris’ What One Low Number Doesn’t Show [NYT] [2] he demonstrates that a low employment figure doesn’t indicate a tight employment situation. The current stats do not consider the change in demographics and who is actually looking for work as compared to 1983.

23% of inflation figures include housing data but its low because the government uses a rental equivalent figure for a sale:

In John Wasik’s What U.S. Government Won’t Reveal About Inflation [Bloomberg] [3] he contends that it is in the government’s best interest to keep inflation low because of their inflation related obligations. I have written about this before. [4]

The workforce will grow more slowly than we would expect because of aging baby boomers but the track record of using demographic analysis, such as, the ages of the workforce in ten years, is poor at best:

In Michael Mandel’s Demographics is not Destiny [BW] [5] he contends that the recent study released [pdf] [6] that the slow growth is the labor force is a weak argument and the researchers essentially say so in their closing arguments of the report. This has broad reaching impact on the housing market since one of the main purchasing segments has been second home and investor purchases by baby boomers. Here’s two reports on it. [7]

Access to more information is exciting, but it requires more analysis, not less. I am sitting here thinking employment stats are overstated, inflation is understated and whether or not the “*” should be dusted off in Major League Baseball. Its a lot for any reasonable person to digest.