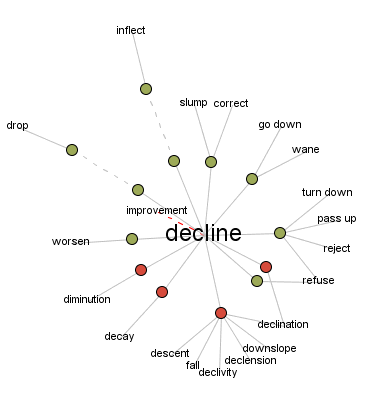 Daniel Gross has an insightful post at Slate called Declining Declinism: Don’t believe the historians and economists who say America’s best days are behind us. [1]

Aside from Declining [2] Declinism, I would also could consider Recessionary Recess and Falling Fallout. My kids remind me often of the double-negative wonder of “That’s totally non non-heinous” used effectively in Bill & Ted’s Excellent Adventure [3].

Bill and Ted take this to the extreme [4] and use it to their advantage to really emphasize words. If something is heinous it is bad. If it’s non-heinous that’s one negative and it becomes good. It’s it’s non-non-heinous then the negatives cancel each other out but the emphasis of the word heinous becomes double, so it becomes really bad.

Here’s the gist from Dan:

Economic prognostication is hamstrung by a tendency to extrapolate from recent trends far into the future. It happens at the top of a cycle—the Dow is going to 36,000! Housing prices will never fall!—and it happens when we plunge into a ditch.

Of course that was part of the problem with the way the bad news was delivered by Robert Shiller [5] and Nouriel Roubini [6] a few years ago. For some reason the former hasn’t retained his momentum and the latter is now loved by the media. Perhaps its more about the way they party [7].