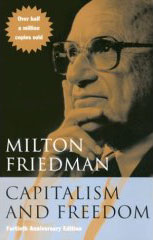 I always admired Milton Friedman because he spoke with such clarity over complex economic issues and because he was so refreshing and full of new ideas. The first economics book I actually enjoyed was Capitalism and Freedom [1]. When I learned of his death [Ch. Trib.] [2], I decided to re-read it.

He believed in less government control and the power of free markets. For example, housing was something government should have a limited roll in. Here’s a transcript [3] and video excerpt from the show Uncommon Knowledge [4].

FRIEDMAN Housing and Urban Development has done a enormous amount of harm. My god, if you think of the way in which they’ve destroyed parts of cities under the rubric of eliminating slums. You remember Martin Anderson wrote a book on the federal bulldozer describing the effect of the urban development. There’ve been many more dwelling units torn down in the name of public housing than have been built.

ROBINSON Jack Kemp has proposed selling to the current inhabitants of public housing their unit- their townhouse, their apartment for a dollar apiece and just shifting the ownership to the people who live..

FRIEDMAN If you got rid of the Department of Housing and Urban Development, it would be worth doing that.

From the Chicago Tribune: [2]

Friedman was considered a leading economic thinker of the 20th century. His many prescriptions for policy, notably on managing the nation’s money supply and curbing the welfare state, influenced presidents and presidential candidates dating back to the 1960s. His sweeping, pro-capitalist ideas earned him legions of followers domestically and overseas, while also sparking dissent and controversy.

Friedman was awarded the Nobel Prize in economics in 1976 for a body of “original and weighty work,” including his money supply research, which jurors said had influenced fellow scholars as well as the U.S. Federal Reserve and the central banks of other nations.

Friedman’s influence extended far beyond the ivory tower. He became an economist-celebrity, promoting his passionate beliefs in books, magazines and television appearances. With confidence and a professor’s logic, he sought to demolish the conventional wisdom after World War II that government must play a sweeping role in people’s lives.

Friedman favored a policy of steady, moderate growth in the money supply, opposed wage and price controls and criticized the Federal Reserve when it tried to fine-tune the economy.

A believer in the principles of 18th century economist Adam Smith, he consistently argued that individual freedom should rule economic policy. Friedman saw his theories attacked by many traditional economists such as Harvard’s John Kenneth Galbraith.

More than anyone else, Milton Friedman was responsible for challenging the worldview of British economist John Maynard Keynes, who believed in the power of government to guide and stimulate economic growth. As an alternative to Keynesianism, he put forth a more laissez-faire philosophy known as monetarism—the doctrine that the best thing the government can do is supply the economy with the money it needs and stand aside.

Here’s a great collection of brief clips [SA] [7] from a PBS special he did in 1980. I inserted one of them below on the problem with the gold standard.