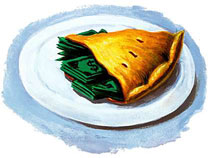 New York Magazine had a recent story on the glut of real estate brokers in Manhattan. Like the housing market, there seems to be an endless supply of individuals looking to make their fortune in real estate. [1] Well, it looks like reality is beginning to set in.

This is a national phenomenon.

Since the entry into the brokerage profession is relatively simple, the employment should be more reactive to changes in the real estate market as compared to many other professions. Boom in the housing market = surge in brokers.

I have no stats on it, but I suspect the fallout rate, Darwin’s survival of the fittest should correlate as well. However, the large number of drop outs creates more opportunities to enter the profession.

The Big Picture also posts this chart [3], which was originally taken from PIMCO [4]. It compares the trend of real estate agent hires versus manufacturing jobs. The chart is misleading since the lines don’t really cross at the “X” because the scales are different, but the trend is apparent, real estate or service jobs are increasing and traditional factory jobs are declining as a percentage of the population. 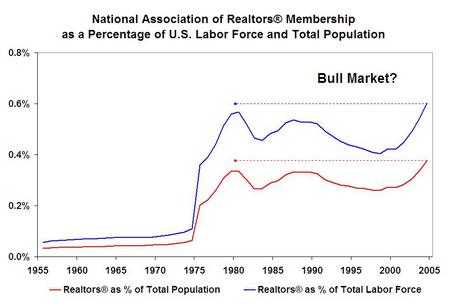 Also taken from the Big Picture, which was taken from Mike Panzer, this chart relates membership in the NAR as a percentage [5] of US total population and total labor force. The trend spiked in the late 1970’s and trended downward until the past few years.

I look at this chart very skeptically. I wonder if the NAR became a more effective organization in the mid-1970’s for such a pronounced jump, almost overnight.