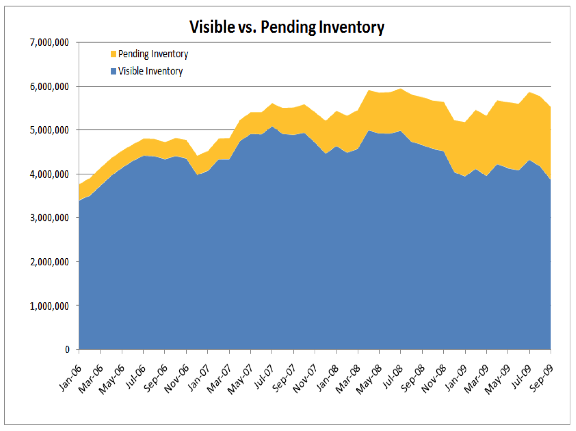 One of the by-products of the credit crunch has been the rise in shadow inventory. Within my own market stats [2], I consider shadow inventory all units that are complete or under construction but not yet offered for sale as condos (sometimes as cond-ops or co-ops). In many cases the developer was unable to sell the initial block of units offered and is therefore unable to release the units behind them.

The development stalls because the lender behind the developer usually prevents the units to be converted to rentals because the value of the project would fall considerably as a rental on their balance sheet, causing stress to their capitalization ratio.

The lender’s reluctance to make such a decision is referred to as:

The total unsold inventory (which combines the visible and pending supply) was 5.5 million units in September 2009, down from 5.7 million a year ago. The total months’ supply was 11.1 months, down from 12.7 a year earlier. This indicates that while the visible months’ supply has decreased and is beginning to approach more normal levels, adding in the pending supply reveals there is still quite a bit of inventory that will impact the housing market for the next few years, especially in the context of the current increase in home sales, which is in part due to artificially low interest rates and the homebuyer tax credit.

In other words, even with the surge in activity over the past several months, total inventory hasn’t changed all that much (I agree with Bob [4]).