The Housing Trend Is Your Friend, Until You Get Distracted and Paint It

It has not been a quiet week in Lake Wobegon, Minnesota, Garrison Keiller’s “A Praire Home Companion” radio show that takes place in an imaginary town where all the woman are strong, all the men are good looking and the all children are above average. He’s retiring after a 46 year run and therefore my weekly routine will be broken. I’ve listened to it for years and I have to come to terms with this change.

There seems to be a lot of change going on right now and and lots of distractions. I don’t want my loyal readers to be distracted by being able to Watch the First 10 Seasons of Bob Ross’ The Joy of Painting Free Online. During periods of significant market change, many attempt to paint their housing market with a broad brush and thats always a mistake.

To offset these types of distractions, I highly recommend playing hipster ambient sounds as you try to focus. Keep alert because I’ll be trying to distract you further down the page.

Understand the Change in Market Conditions

I’m in the middle of my quarterly market report gauntlet for Douglas Elliman. As I noted a few weeks ago, the super luxury ($5M≥) Manhattan market has noticeably cooled, the Manhattan rental market went “negative” for the first time in two years and there is growing weakness at the top of the Miami housing market, especially on the beach. This is a pattern I have noticed across most of the housing market I cover as of late..almost as if the high end peaked before the remainder of the market.

Yes, housing market trends change. Many things change. There was a recent good read about the drop in commercial property market activity. My colleague Bob Knakal is the voice of reason in the NYC commercial real estate space and he points out what should be obvious but isn’t to most participants:

“The market is cyclical,” said Robert Knakal, chairman of New York investment sales at Cushman, which tracks commercial-property transactions in all of the city’s boroughs except Staten Island. “It can’t keep going up.”

For those of you who hear me speak in public, you know I often levy criticism at the real estate community for being “linear” – perceptions in the heat of the moment generally run as follows:

Obviously not. Let’s type without using all caps for clarity.

Distraction The National Weather Service will abandon it’s ALL CAPS format. When the world made the switch over to computers/internet, I was always amazed by how many people continued to use “all caps” in their early communications. They came across as shouting and without shapes, block text was much harder to read. Still, I will miss my weather advisories without the familiar all caps type.

When brokers start predicting a “correction,” that observation, while consistent with public perception, is already old news…like 12-18 months too old.

Let me diverge into pricing theory for a second. I am using Manhattan as a reference but this applies to any housing market.

Super luxury Manhattan sales contracts fell sharply in late 2014 or early 2015. That data is very opaque so we don’t really know the precise “moment” buyer sentiment changed. That drop in contracts meant that perception of value changed as buyers rethought how the offering price related to what amenities the units offer (aka what was the value to them).

From that moment, there was a big disconnect between what sellers (developers) wanted/needed to sell their units for and how much buyers were willing to pay. The seller was anchored to their price because they built their project with expectations of achieving those prices. The drop in contract activity in the super luxury market is clear evidence that value to the buyer changed. Price doesn’t always equal value (remember, I’m an appraiser by trade.) This doesn’t get fixed by offering more amenities or creating more brochures or getting more press coverage for the project to change the buyer’s mind. Perhaps some of that happens on the margin, but the market is too damn powerful.

Fast forward to the present. Only in the past few quarters did the real estate community begin to speak more openly about the new market condition. Yet values fell 12-18 months ago. Sales prices, when they occur at lower numbers than expected, are confirmation of the value change. Until sellers capitulate to the value change, sales in the super luxury market segment will remain anemic.

I felt like a lone wolf back in the fall of 2014 as I pushed out this view in our research and to the media.

Those projections weren’t about a lucky call…

Distraction The voice of Lucky Charms commercials passed away – interestingly his name was Arthur Anderson – “Frosted Lucky Charms,” he’d sing, “they’re magically delicious.” I have all his sayings trapped in my head yet I haven’t had a bowl of them in decades and can’t remember people’s names I just met at parties.

Developers Learn That Other Markets Are Changing

Everyone’s favorite to talk about super luxury development One57 – the developer tried to take the remaining 20%± of unsold units and convert them into luxury rentals. That effort failed as they realized the luxury rental market is softening faster than the super luxury condo market. 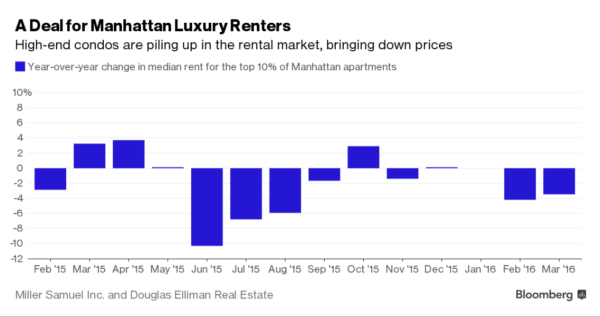 Why? Because all those investor sales that have been closing over the past year as each building is completed become luxury rental apartments. The high inventory volume entering the market is causing luxury market rents to fall while the balance of the market remains elevated. The developer gave up and reverted back to selling the units as condos.

This says it all:

The builder has concluded that the market for condos in that range, toward the lower end of what’s considered luxury, is better than the one for high-end rentals.

This is an opportunity for my Housing Note readers to line up an buy 1,000 square foot 1-bedroom condos for $3.5 million.

Distraction There are cycles in housing – usually not 17-year cycles “This particular group of insects has a 17-year-life cycle that begins underground and culminates in the air as they swell and swarm and scream and sing, issuing deafening cries as the males desperately seek mates. This current 17-year-cycle, which began in 1999, begins to end next month” – so let’s not get distracted.

My friend Barry Ritholtz over at Bloomberg View, WaPo, The Big Picture and his wealth management firm wrote an op-ed piece that lays it out very clearly. His piece really resonated with his readers as evidenced by it’s ranking as 4th most popular post on their web site 2 days later: It’s Been Rough Coming of Age in the New Century. One of the things he touched on was my concept of “pre-covery” that I wrote about more than three years ago.

Distraction You can sync a 1986 episode of Family Ties with Pink Floyd’s Dark Side of the Moon. In college – before the days of music videos and early MTV when they actually played music – we would play music alongside the TV with the volume off – most often when throwing a parties – we referred to those as “Visuals.”

Douglas Elliman published our research for the five markets in our quarterly report series on the South Florida housing market. Like New York, it is a regional housing market in transition, with softness at the top, elevated but slipping sales, rising inventory but darn good weather right now.

Like New York, participants are coming to grips with a changing market so it is important to keep the right context. Visually the chart below is how Miami looks to me, combining Miami Beach and the mainland into one market like I did a while back. 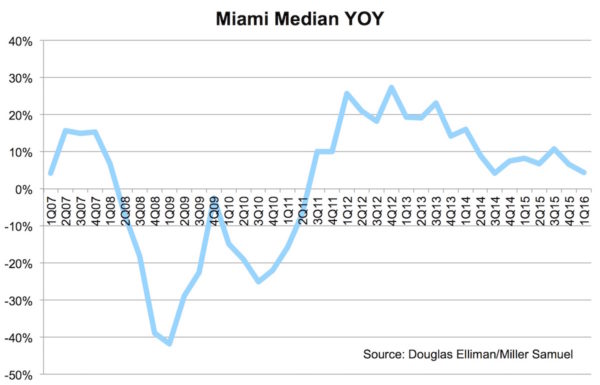 The market is coming off of a boom and is now seeing much more modest and steady price growth in aggregate. I’m quite surprised at the number of developers and Wall Street financiers who seem surprised by the decline in Miami Beach specifically and didn’t see this coming (even though sentiment changed in late 2014).

The mainland is performing better than the beach, largely because of pricing – more high end property is found at the beach and that’s where a lot of the weakness is concentrated. And why it is a little frustrating to see SEO friendly headlines like “Miami is Melting” since that’s not the overall market condition. At the very least the headline should be “Miami Beach is melting” and that represents a small fraction of Miami’s housing market.

In the first quarter, Boca Raton showed the most market strength in terms of sales and prices. Palm Beach was second to that since the sharp drop in closed sales for the quarter was offset by a huge surge in contract volume – some sort of seasonal shift – a late start to the season. Fort Lauderdale showed weakness after being the regional leader over much of the past year.

Elliman Report: Miami Beach + Barrier Islands Sales 1Q 2016 Housing prices and sales in the Miami Beach showed weaker trends in the first quarter of 2016. Median sales price declined 6.6% to $408,750 from the year ago quarter. Average sales price slipped 7.5% to $905,252 and average price per square foot fell 5.5% to $634 respectively over the same period. Price trends in the single family market were generally higher than within the condo market. The median sales price of a condo sale slipped 1.3% to $370,000 while the median sales price of a single family sale increased 3.2% to $1,600,000 respectively over the same period… 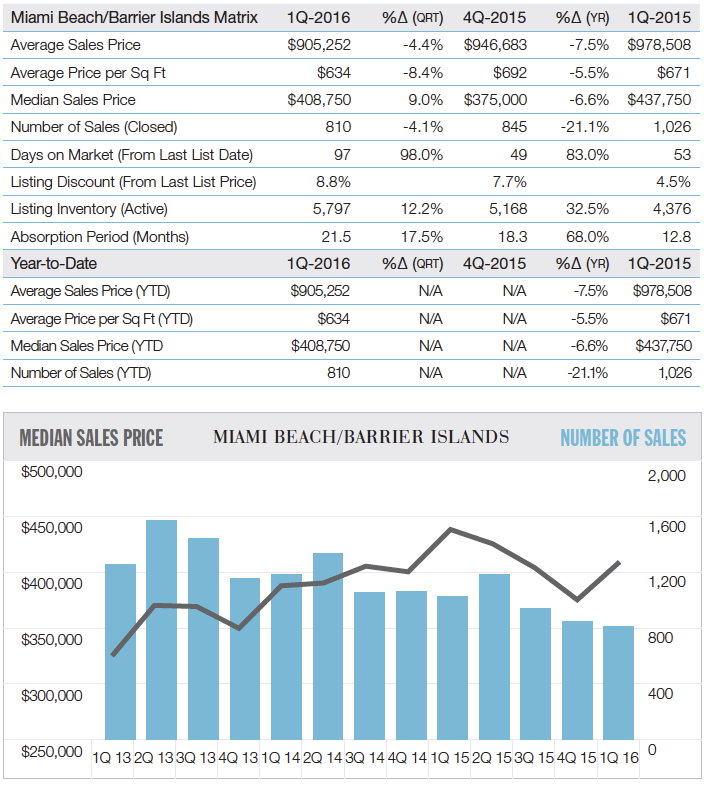 Elliman Report: Miami Coastal Mainland Sales 1Q 2016 Miami’s mainland housing prices generally moved higher as sales declined and inventory expanded. Contributing to lower activity was the 28.8% drop in distressed sales, comprising foreclosures and short sales as the market continued to move properties into stronger hands. The market share of distressed sales fell to 21.5% of all sales, from 38.5% two years ago. Sales of non-distressed properties fell 13.8% over the same period. The reduction in distressed sales lowered the share of the market paying with “cash” by 5% to 50.7% of all sales, 64.2% for condos and 35.2% for single families… 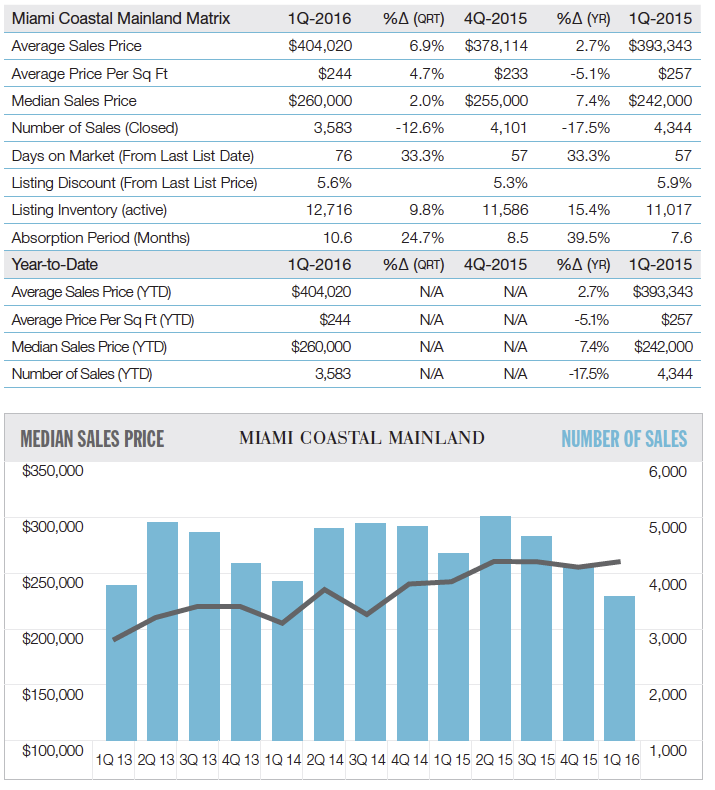 Elliman Report: Boca Raton Sales 1Q 2016 The price trends for both Boca Raton property types generally moved higher. Condo median sales price jumped 36.2% to $182,500 and average sales price rose 11.8% to 304,196 respectively from the year ago quarter. A large part of the gain was the 12.4% rise in the average square footage of a sale to 1,601 square feet. The single family market followed the same pattern…

Elliman Report: Palm Beach Sales 1Q 2016 Palm Beach housing prices set new records in the first quarter of 2016, although the pace of the market cooled as inventory expanded. The average sales price of a single family sale surged 70% to $7,923,021 to the highest level in a decade. Average price per square foot of a single family sale showed a similar pattern, rising 37.1% to $1,588 to set a new record over the same period…

If you need something rock solid in your life (particularly on Friday afternoons), sign up for my Housing Note here. And be sure to share with a friend or colleague before the cicadas arrive. They’ll (your friends) feel lucky, you’ll feel like painting and I’ll write in all caps.