It’s hard to believe that the classic “More Cowbell” SNL skit aired 21 years ago this week. I played a lot of Blue Oyster Cult in high school and college but since I saw this 2000 skit live when it aired, I’m all in (on cowbells). To this day I have a cowbell from my son’s old drum kit on my workbench and I have a cowbell app on my iphone that plays Christopher Walken saying “I’ve gotta have more cowbell” when you touch the cowbell image. This is the type of technology we really need. Will Ferrell said later on when he bumped into Walken (who played Bruce Dickinson) said: ‘You know, you’ve ruined my life…People during curtain call bring cowbells and ring them. The other day, I went for Italian food lunch, and the waiter asked if I wanted more cowbell with my pasta bolognese.’

This week Douglas Elliman published our research on the Manhattan, Brooklyn and Queens rental markets for March 2021. This is part of our expanding Elliman Report series I’ve been authoring for 26 (gulp) years. while the rental market is still seeing significant year over year price drops, they are slowly abating after peaking last fall. Net effective median rent (face rent including concessions) has not seen a month over month decline in four months. Of course rents tend to rise after the new year but the higher gain from February to March suggests that stability is coming.

I’m not sure if this has happened before but the reporting on two of our Douglas Elliman market reports became the 11th (Manhattan rents) and 18th (Westchester sales) of the day by the ±350K Bloomberg Terminal subscribers. A two-fer!

One of the interesting patterns that has evolved in Manhattan rentals is that marketing time has spiked, not because rentals are taking more time to rent (afterall, new lease signings for March had the highest March total since we began tracking in 2008) but rather that, older inventory is being cleared from the market and being rented. I would think this will be a short term data quirk as inventory continues to decline. Here are two versions of the same chart. 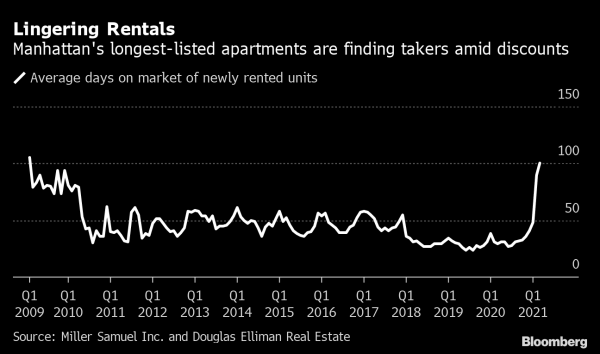 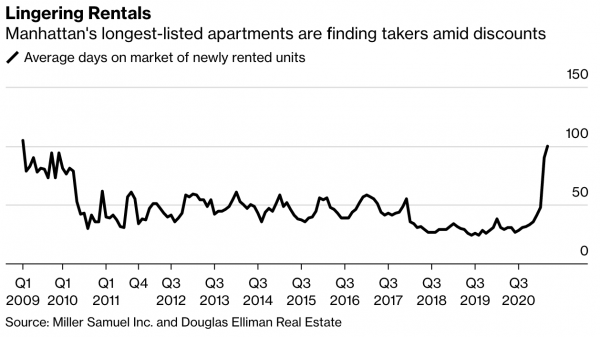 Here is our chart using our research data from the Elliman report that shows month over month changes in net effective median rent. Journalists are taught that 3 data points make a trend and here are four. 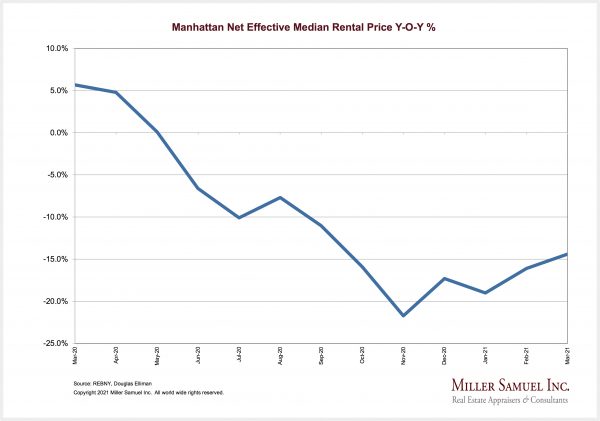 “Net effective median rent has begun to show month to month stability in the new year.” 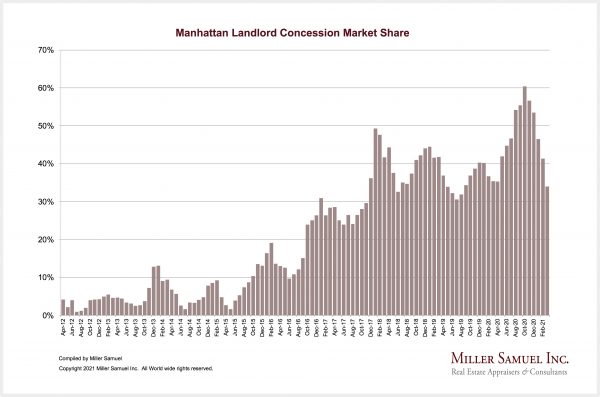 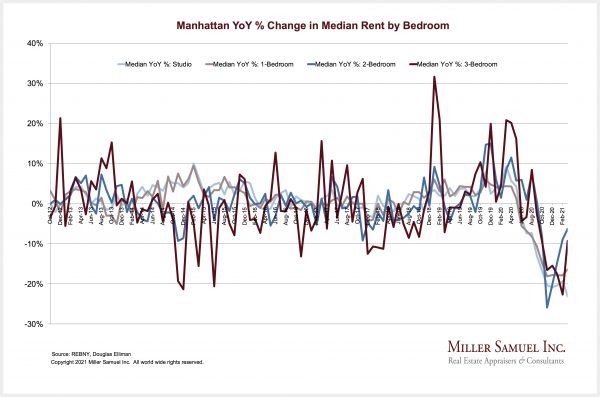 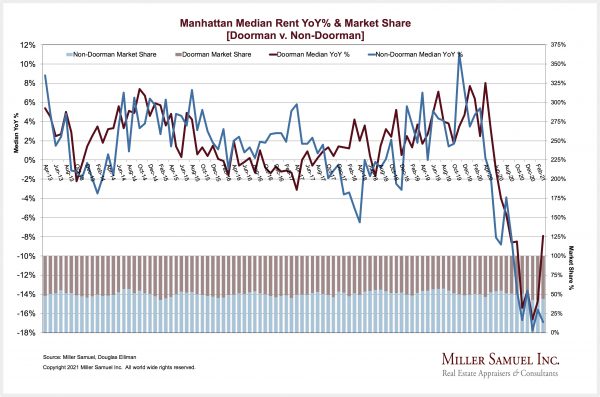 “New lease signings have continued to rise sharply since the fall.” 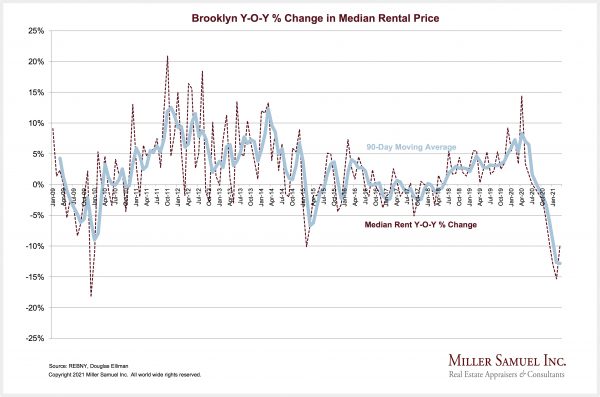 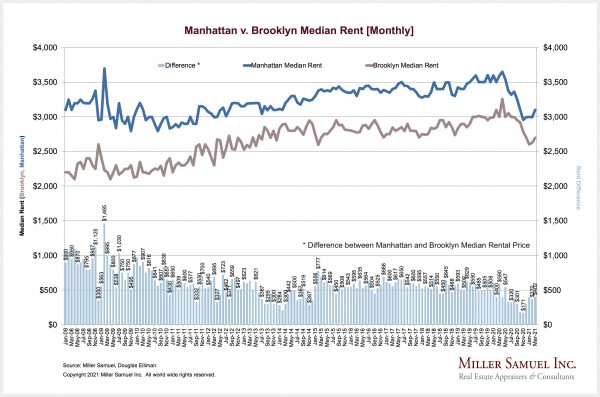 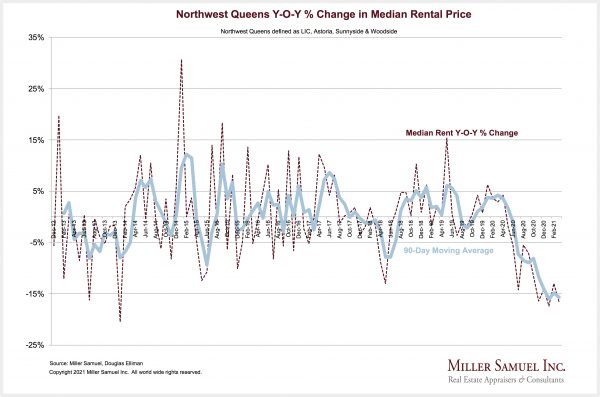 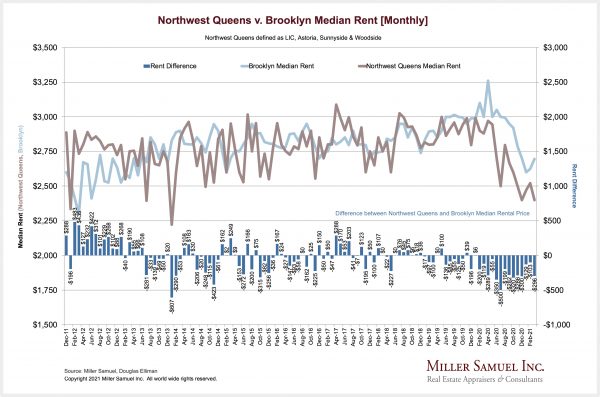 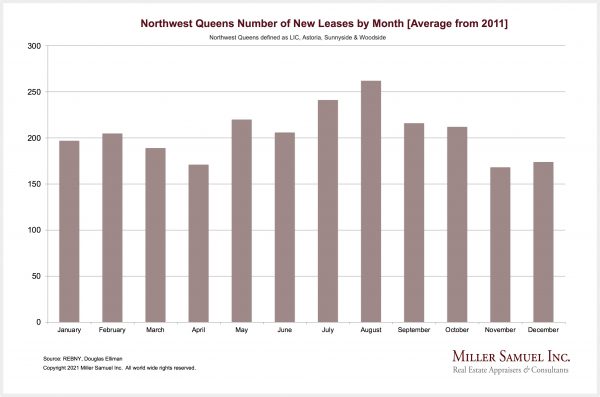 The battle for high net worth individuals pivot from Manhattan to Beijing (by 1? Give me a break). 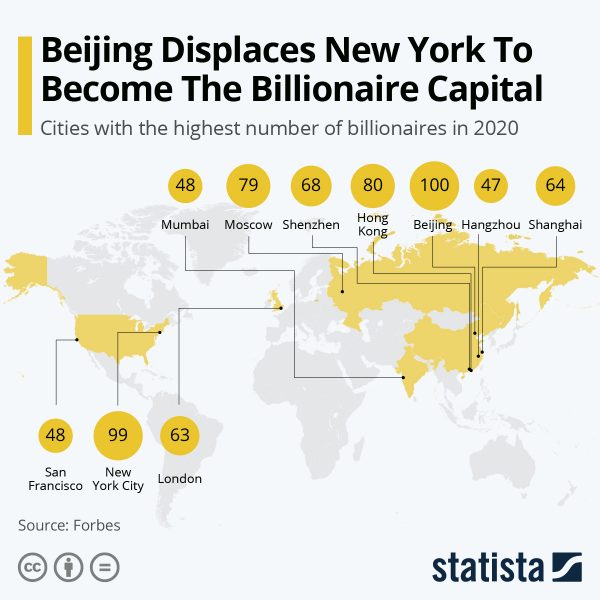 TLDR “The Answer Is No” – Are Californians to Blame for Salt Lake’s Rising Housing and Rental Rates?

It sounds to me like many in Utah are blaming California on their high cost housing woes, yet this is happening everywhere. California was recently blamed for Idaho’s drop in housing affordability in this excellent piece. Record low mortgage rates and lack of new supply will do that. The proliferation of inbound and outbound migration narratives has been endless. This one by the non-profit think tank The Utah Foundations blends data from Atlas and United Van Lines as well as the Tax Foundation, USPS and NAR.

At this point, the only thing I am sure of is that everyone needs to blame someone for something rather than solving the problem. 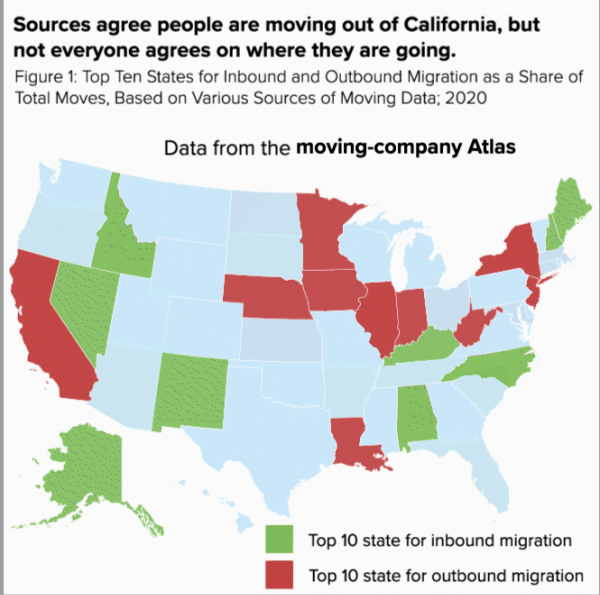 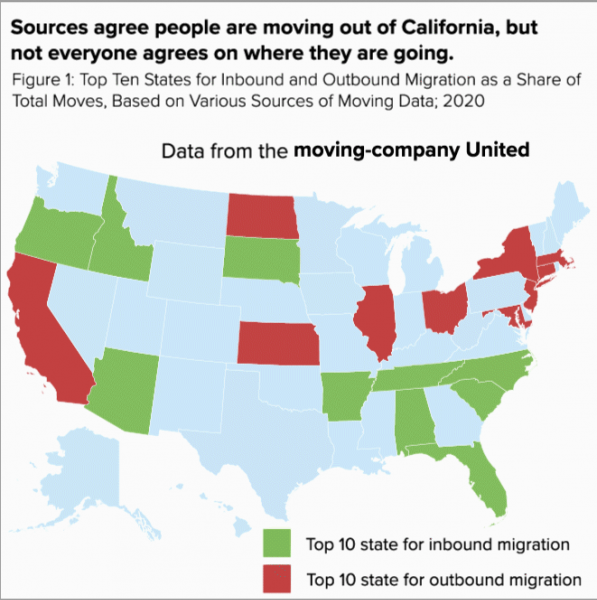 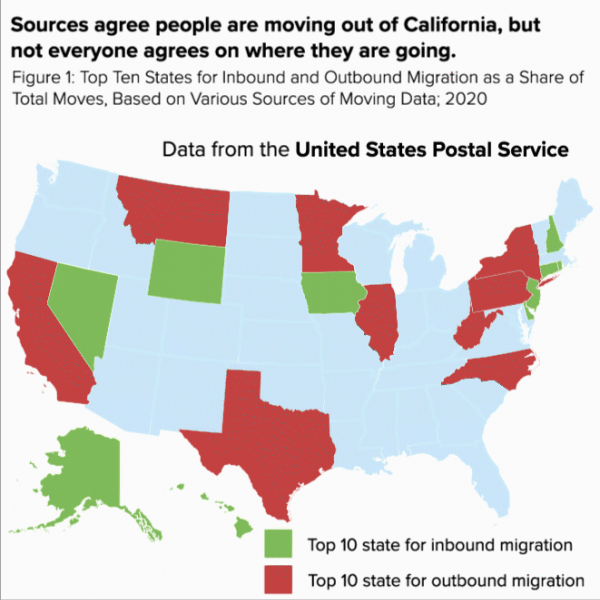 The New York Post looked at another migration study by CBRE this week and I chimed in. 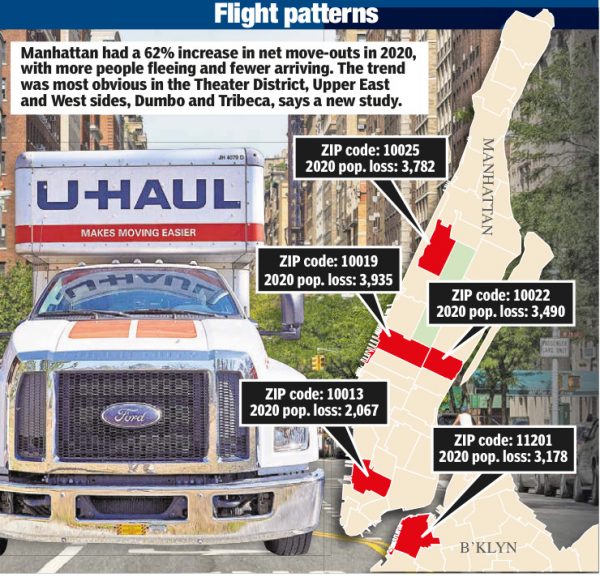 There was a recent Newsday piece: 6 boomtowns: What’s driving rising home prices in communities across LI [subscription] that looked at the change in prices by town using data we compiled from the LI MLS and the results were quite different across the market.

On a macro level, this reminds us not to brushstroke housing markets as being consistent. This is not a new idea to ponder. If you have a subscription, it’s quite interesting to see the variance in performance. The variation in prices don’t infer individual property appreciation but these markets in aggregate are influenced by shift in product mix that sells and post-lockdown, that’s been in favor of higher end. By using median sales price, these numbers are not skewed by a few gigantic transactions. 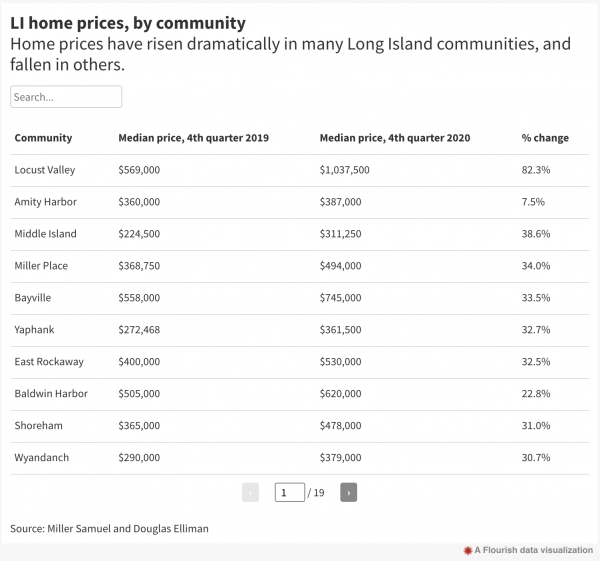 Some anticipated that the recent rebound in Manhattan sales and early signs of rental price stabilization there would come at the expense of the suburban markets that surround NYC. Yet Westchester County showed us that the market remains very tight and robust, not a bastion of affordability. If we zoom out of NYC metro, the NYC suburbs are behaving just like the rest of the U.S. (rising prices and sales, falling inventory)

Prices are rising because the market is in need of more listing inventory. This is a national condition and I see this challenge as a crisis – affordable housing will be an economic challenge to the U.S. for decades. And you can thank record low mortgage rates for that. Low rates drive asset prices higher and this has been going on for decades now.

Bloomberg covered the report and produced a scary chart (black and white versions). 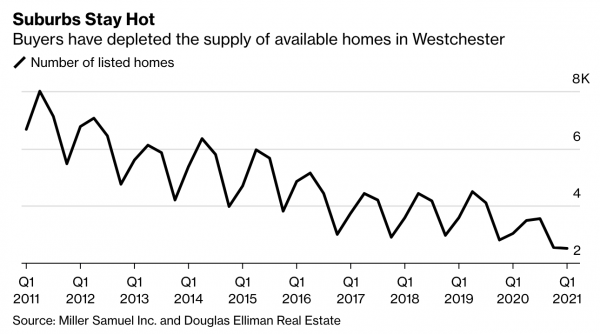 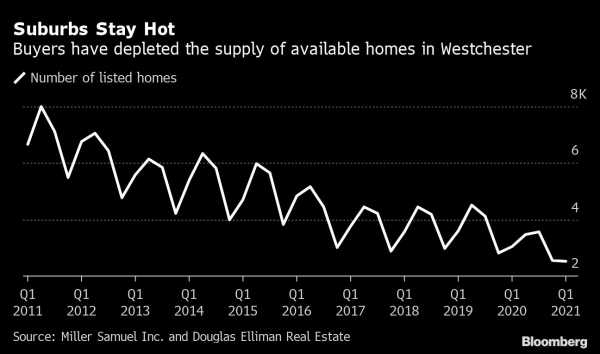 The year end jump in NYC investment sales activity seemed to be more about tax avoidance planning for 2021 rather than a true uptick in demand. Deals in 4Q20 were down 14% from the average of the three prior quarter. 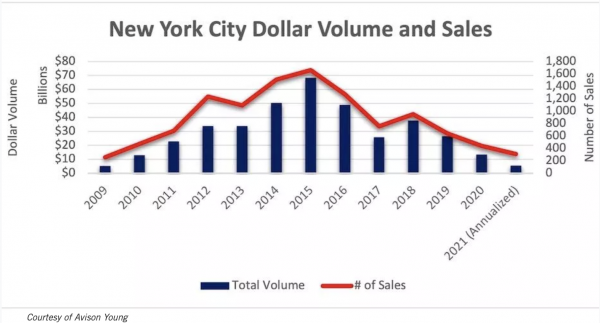 Palm Beach Continues To Defy Gravity With Another Mega Sale

Before we dive into the mega sale pool, new signed contract activity from our Florida research for the Douglas Elliman report shows growing interest in this region. Bloomberg’s chart and article makes it quite obvious: 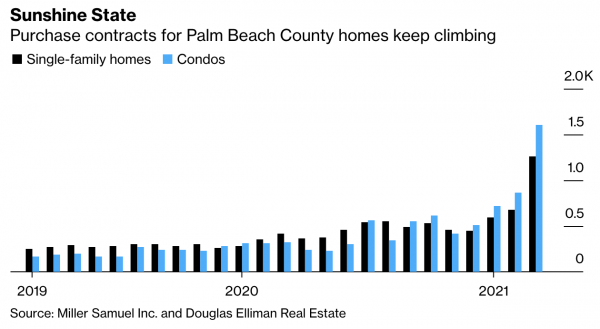 These mega sales are no longer an anomaly. As broken by the Wall Street Journal, Oracle founder Larry Ellison just paid $80 million for a home in Palm Beach and the fourth sale above $50 million in 2021. For those that are curious, these four sales ranged from $3,100 to $5700 per square foot on 1-3 acres (I don’t know Ellison acreage yet.)

And here’s my chart to illustrate the consistency of this phenomenon in recent years. I maintain that this is a new market subset that appears here to stay but has little bearing on housing for mere mortals. 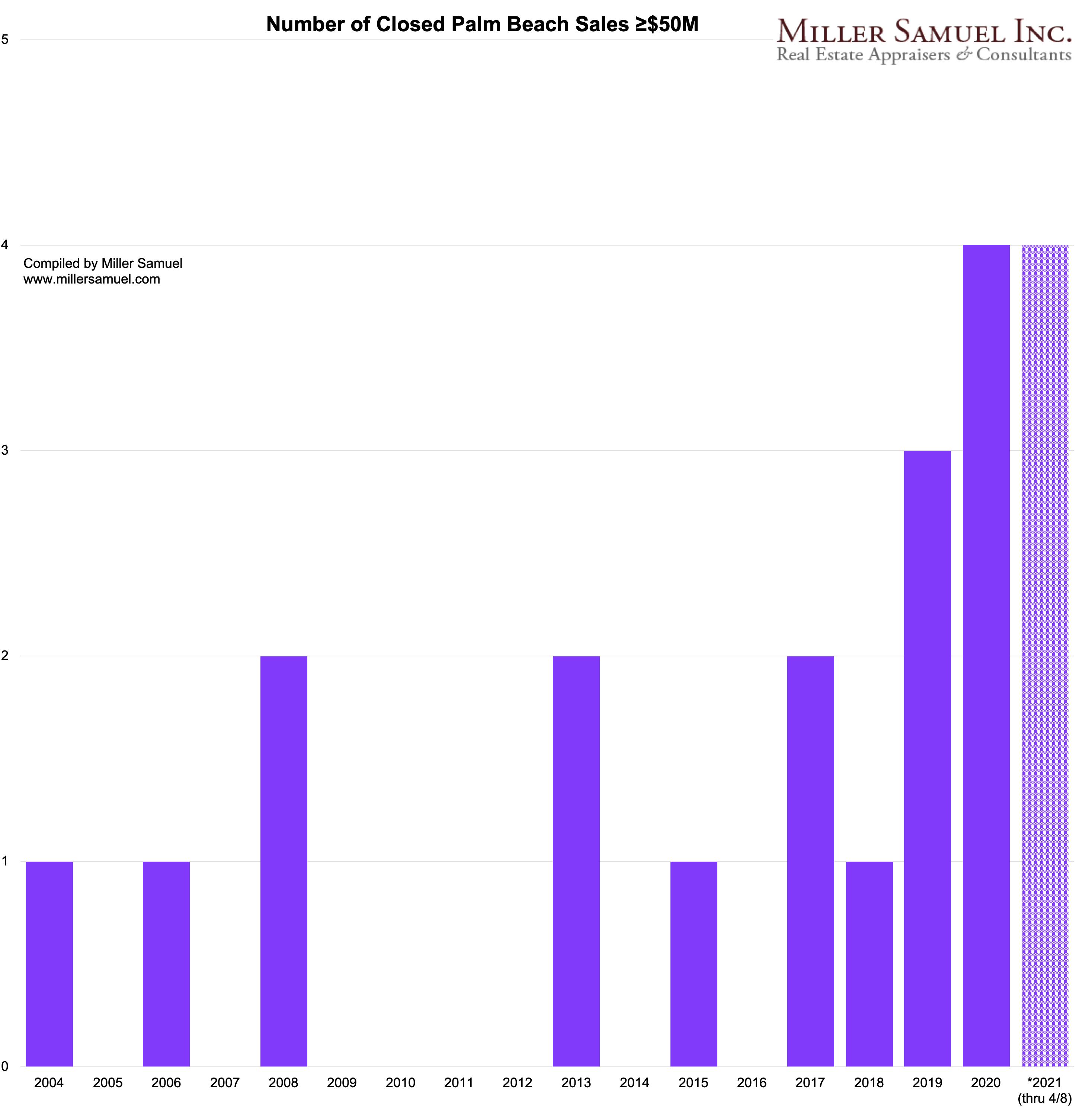 Appraiser Waivers Shifted From An Exception To The Rule

For all the talk about how important appraisers are to risk management by the GSEs, we really aren’t. There is a compelling blog post using AEI data by Ryan Lundquist over at Sacramento Appraiser Blog. 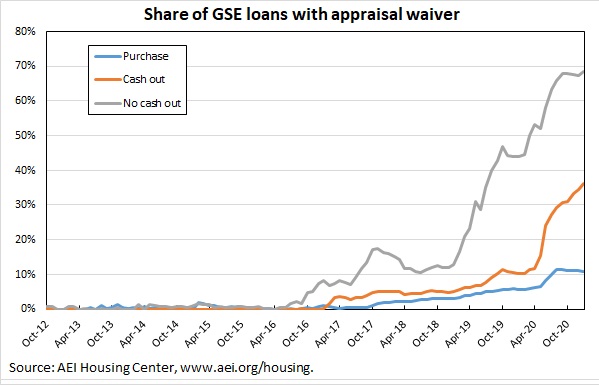 Joan Trice’s podcast started out with a diversity question – asking Dave what TAF is doing about the lack of it in the profession. The lobbing of softballs was probably necessary to have Dave on the call. Dave is a very good bureaucrat and a nice guy who has a knack for saying things in a proactive sounding way. Yet Dave has been at the helm of this gatekeeper organization for more than three decades and until this year never had an African-American on the AQB. For those of you not familiar with the Appraiser Qualifications Board (AQB), they set technical policy which determines entry into the profession. Dave clearly acknowledges that the profession doesn’t reflect our U.S. population demographics (which he is essentially the gatekeeper). His answers sound like this issue is some sort of deep mysterious challenge. He went on to address the steps TAF is taking including the recent formation of diversity committee which, incredibly, is not headed by an African-American (nor are any members of the committee). This is how systemic racism evolves. This organization didn’t start taking action until outside critics began to point out the problem and public pressure influenced the need for action. But if the organization never dealt with diversity and didn’t practice it and either didn’t see it or pretend it wasn’t an issue, then how can they be tasked with fixing the problem? Good grief. Take the two year mentoring process for example – unlicensed appraisers trying to get their two years experience is virtually impossible.

To be honest with my listeners, I could only listen to the first ten minutes (halfway) and then I had to turn it off. Perhaps my listeners can let me know how it ends. Based on the lack of credible actions so far to fix the problem, the pressure is only going to get worse. Why not be proactive now? Wait, I know the answer: “It’s nearly impossible to fix a problem your actions showed you were oblivious of for three decades.”

As I’ve told my (adult) kids for years: Old people can rock.