Before I talk through the impact of the Chinese currency devaluation on U.S. real estate, I wanted to address the Chinese real estate market, specifically the verbage that describes a little discussed housing segment, homes that are not new…what the Chinese refer to as “second-hand houses.”

The Lexicon of “Used” Homes

I’m not getting all William Safire on you, but this semi-derogatory term brings to mind “second-hand smoke” or “hand-me-down” or even worse, “used.” Our family currently lives in a 190 year old home so I’m guessing by now it’s a “six-hand home.” In the U.S., we are afraid of terms like “used” so we choose words like “pre-owned” for cars and “existing” for houses, probably because they are thought to be less offensive to a buyer. I tend to use “re-sale” a lot. In using “second-hand” to describe a house that is something other than “new”, it is no wonder Chinese investors of U.S. real estate seem to prefer “new development.”

Here’s a video on the state of the “second-hand” Chinese housing market.

Capital Flight (no, not an airline based in Washington, D.C.)

Despite the rapid expansion of wealth within China over the past 25 years, there are few domestic investment vehicles for Chinese citizens to use. The housing market is in the midst of a massive bubble (so I find the above video quite scary) and their stock market is in a bubble as well. Since the Chinese economy is said to be underperforming, the currency devaluation was believed to be a way to make their domestic products more attractive (less expensive) to foreign investors. However this acknowledgement of weakening economic conditions may very well prompt additional capital flight (money seeking safety worldwide) even though real estate investment abroad is more expensive since the devaluation.  Capital outflow has been declining over the past year but this could change as the incentive for finding safety expands. 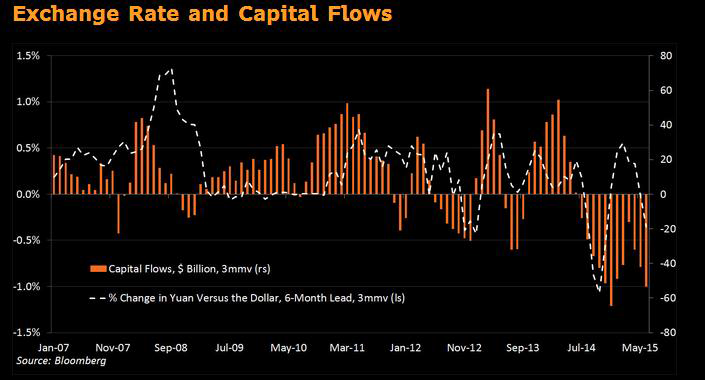 In early 2015, NAR’s Profile of International Home Buying Activity, a survey of their members, put China at the top of the list, beating the Canadians! Oh, Canada! And furthermore, 69% of Chinese real estate investors are “all cash” buyers and 86% are buying in urban centers. California accounts for the lion’s share of their interest with 39% of the buyers. However the report indicates that only 7% of demand is applied to New York City.

The NAR report is literally the only source of international real estate buyer patterns in the U.S. (because of fair housing laws), so this is the point where you need to step back, take out your grain of salt and look at the data source. The National Association of Realtors don’t have the same membership presence within the ranks of real estate agents in New York like they do in California and the rest of the U.S. Plus this report is still a “survey” which is one step below a “wild guess” in my book (opinion).

Tourism and consumer spending by Chinese abroad is expected to decline, but it is not clear whether longer term investments like real estate will show the same impact.

There is a terrific read in The New Yorker on the devaluation situation China’s Long Minsky Moment:

Underlying all of this is the fact that China is still dealing with the consequences of an enormous credit and real-estate bubble that has accompanied, and prolonged, the latter stages of the growth miracle. Between 2007 and 2014, total private debt in China rose from about a hundred per cent of G.D.P. to about a hundred and eighty per cent—a jump even larger than those seen in countries such as Ireland and Spain, which subsequently endured deep recessions.

A long time beneficiary of Chinese real estate investment, Australia is bracing for a surge in flight capital from investors seeking safety outside of China. Real estate would be the focus as before.

What does this mean to U.S. real estate assets targeted by Chinese investors? Will the Chinese stop buying real estate, especially the new, tall and shiny kind? At first glance, it doesn’t look like it – if you ascribe to the theory that the Chinese are even more incentivized to diversify now that their economy is visibly weakening and the government has aggressively sought to remedy that. Yes the devaluation means that U.S. real estate is more expensive, but in a twist, the devaluation means that there are problems at home without a lot of investment options, hence the potential for capital flight.

Did I tell you we’re going to Shanghai in September? I’m speaking at The Real Deal U.S. Real Estate Showcase & Forum with more than 6,000 real estate investors and professionals in attendance. I’ll be sure to gather lots of anecdotal information from real estate investors and share with you (even though last week we determined that the plural of anecdotal is not data).

And keep in mind that U.S. “existing” (a.k.a. “second-hand”) inventory remains very tight.

The rental report I prepare for Douglas Elliman covering Manhattan, Brooklyn and Queens was published yesterday and if you’re a renter, the news isn’t good. Here are a few key points for each borough and a sampling of charts: 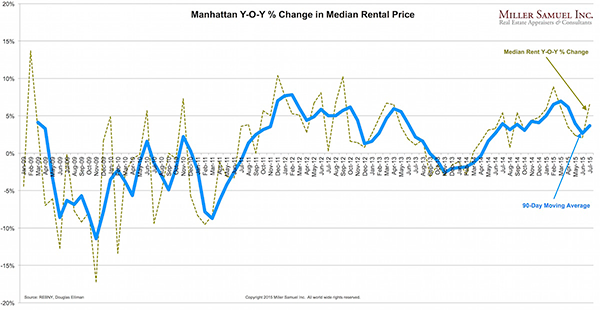 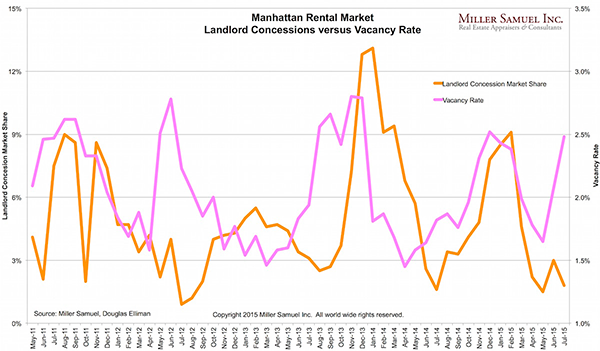 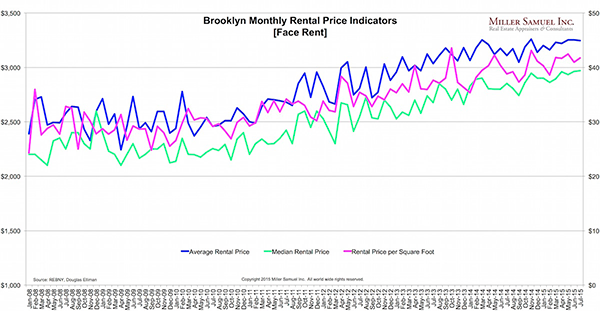 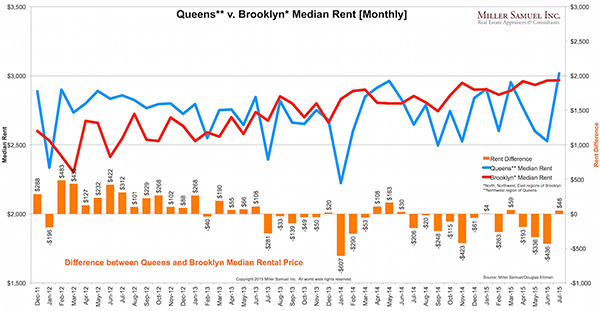 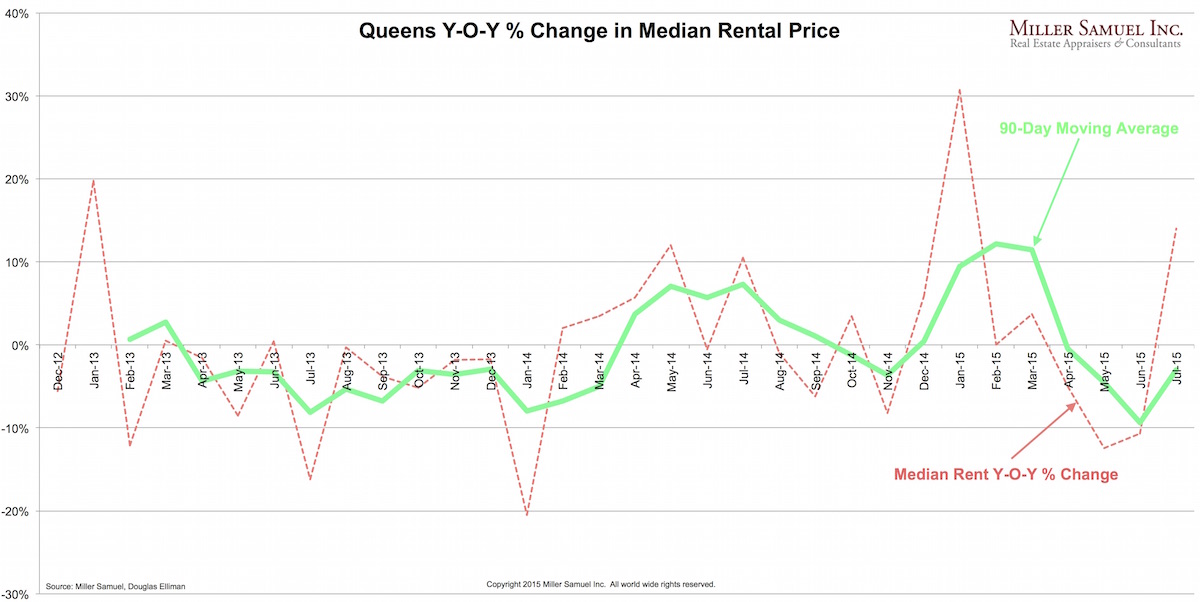 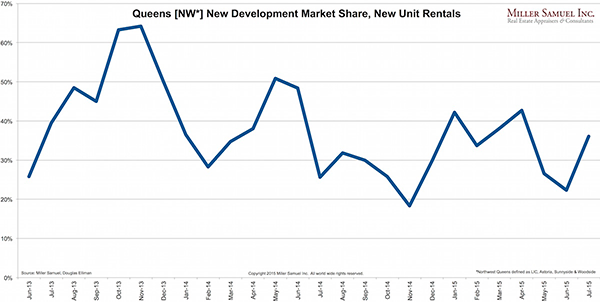 Be sure to share these Housing Notes with your friends and colleagues (C’mon, seriously. SHARE.) and ask them to sign up. It’s free, and if you don’t help me spread the word, I might have to devalue you.