If you have been out of the loop for the past 24 hours, then you missed the release of the Manhattan, Brooklyn & Queens Rental Report [1] I author for real estate juggernaut Douglas Elliman [2]. I was invited to join Betty Liu on Bloomberg TV’s “Bloomberg Markets” this morning to talk about the report as well as the New York City residential real estate market and Fed policy.

But if you are up to date on the state of the rental market, I’ll bet you haven’t seen this video of a dog who catches lobsters (because I hate cat videos):

A career high water mark for me (lobster-wise) was blogging about lobsters and their link to the subprime housing crisis back in 2009 in a post titled Lobster Prices And Subprime Lending [3]. We’re talking about Maine lobsters, not Long Island, New York, lobsters [4] obviously. I gave up my lobster fishing license a few years ago.

While rental housing prices in New York City continue to flirt with records, weakness is beginning appear in other metrics besides price. Like the sales market, the rental market housing stock is skewed to the high end, driving up prices at the low to middle of the market.

Here’s the Elliman rental report [5] for NYC and an infographic whipped up by Douglas Elliman. 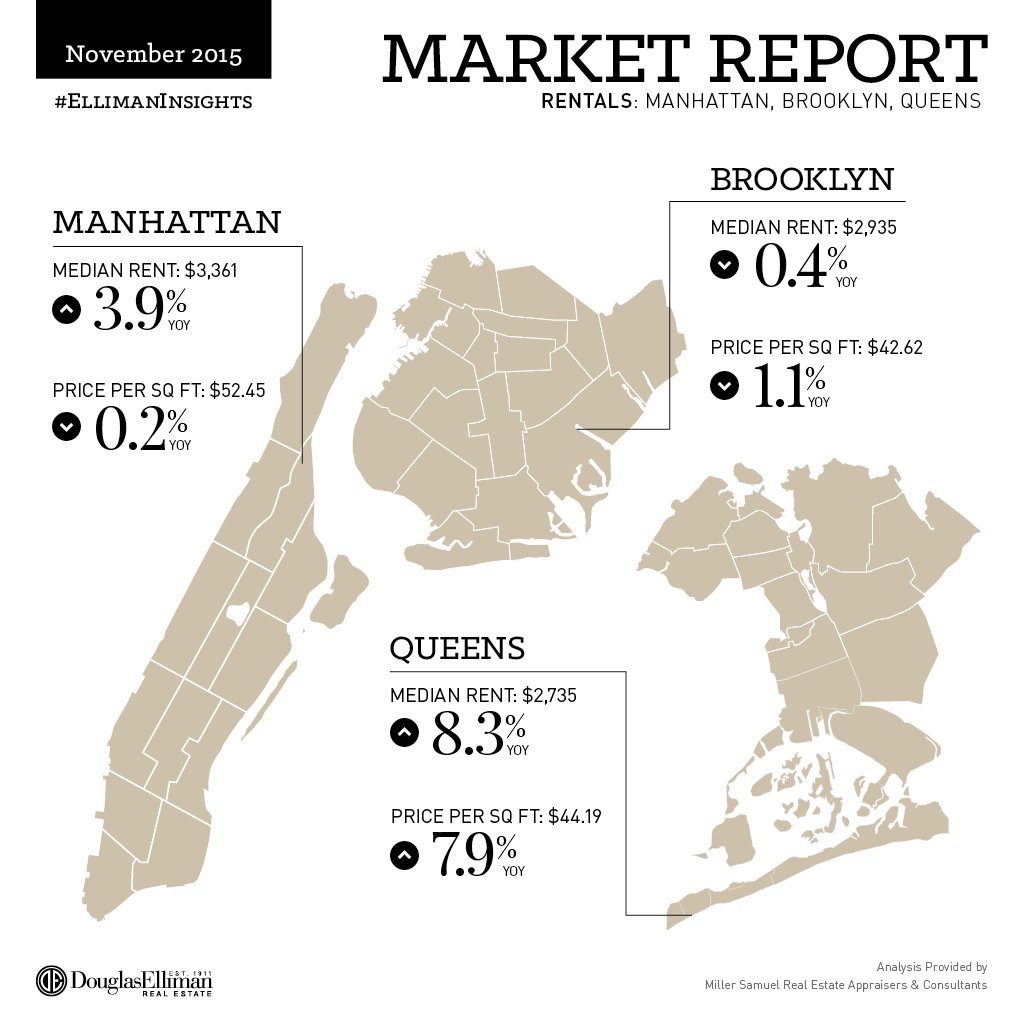 Here’s the breakdown by region:

MANHATTAN While Manhattan year-over-year median rental price expanded for the 21st consecutive month, some market weakness was beginning to appear. Market share of landlord concessions, vacancy rate and listing discount expanded. The market share of new rentals where the landlord paid the brokerage commission and offered the tenant free rent, rose sharply to 13.5% from 4.8% in the same period last year, the highest in nearly 5 years… 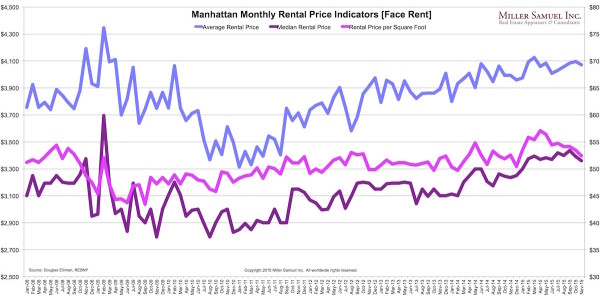 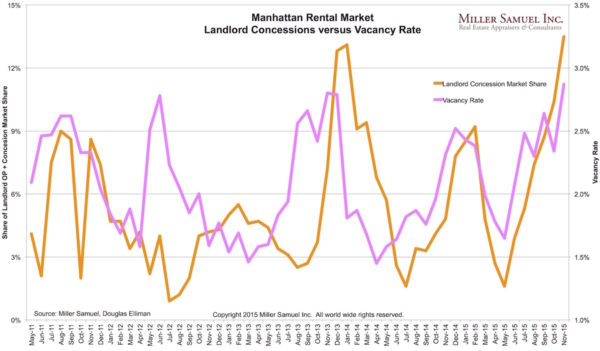 BROOKLYN While Brooklyn rental prices continued to fly close to recent records set in the summer, the rate of price growth eased since then. The rise in median rental price on a year-over-year basis slipped each month since August when rental prices peaked. Median rental price slipped a nominal 0.4% to $2,935 from the same period a year ago, largely from a 3% drop in market share of smaller apartments. Fewer smaller apartments being rented and that is where the price growth has been concentrated. The median rent for studios and 1-bedrooms rose 9.2% and 2.1% respectively from the same month a year ago… 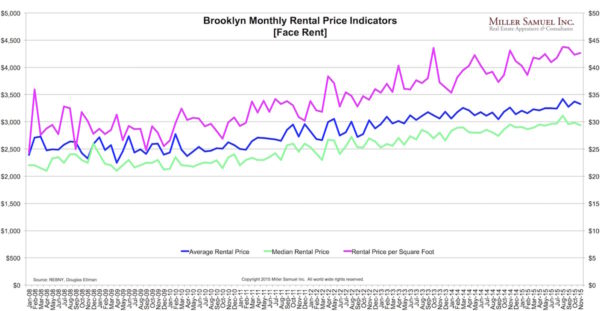 QUEENS Rental prices in northwest Queens moved higher, yet the number of apartments where landlords paid the brokerage commission and provided free rent accounted for more than half of all transactions. Median rental price expanded 8.3% to $2,735 from the same period a year ago as average rental price and rental price per square foot followed a similar pattern. The rental price growth was more pronounced in the studio and 1-bedroom markets than were in larger apartments… 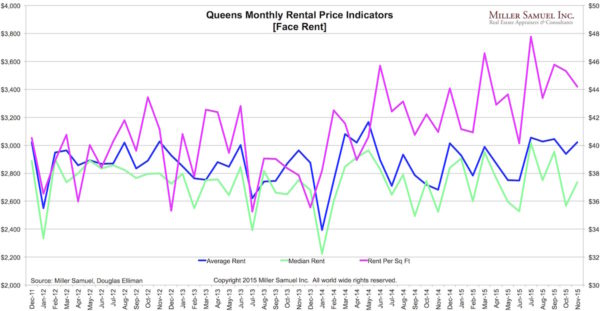 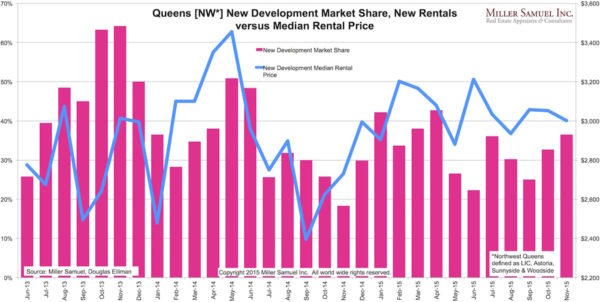 By the way, I think it’s becoming more and more apparent that the Fed is raising rates next week. That’ll push mortgage rates a little higher and will keep pressure up on rents, at least initially as borrowers on the margin will be tipped back into the rental market. I remain very skeptical that there are going to be multiple increases in 2016.

A while back I mentioned a great book here in my Housing Note – Spurious Correlations [13] that seemed appropriate to consider alongside the following monthly release by Quicken loans. 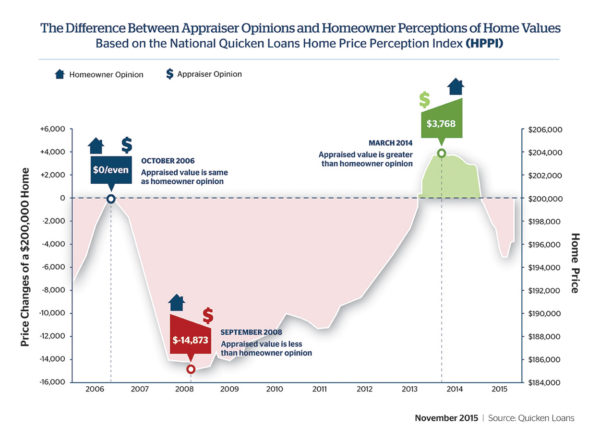 Admittedly I wrote about Quicken Loan’s Home Value Index (HVI) [15] last year when I was a columnist for Bloomberg View [16], but I’ve come to believe this index really benefits no one and tells us nothing. I love a good chart and I love quirky insights even more than the next person but the very idea of a report that places homeowners and appraisers home value opinions on equal footing seems worthless: a neutral third party valuation expert (appraiser) versus a homeowner who has skin in the game (consumer), often playing the bank for a higher valuation as in a refinance transaction. This index is pushed by Quicken Loans, a high volume, appraisal management company (AMC) [17]-loving mortgage firm that is being sued by FHA for pressuring appraisers on values.

According to the DOJ, Quicken allegedly had a “value appeal” process where, when Quicken received an appraised value for a home that was too low to approve a loan, Quicken often requested a specific inflated value from the appraiser with no justification for the increase– even though such a practice was prohibited by the applicable FHA requirements.

The FHA litigation alleges Quicken is pressuring appraisers to raise their values without support (probably to keep volume elevated).

Early this year I was speaking in Detroit at an economic forum and the speaker after me represented TSI who is a key AMC (appraisal management company) for Quicken. I’m sure he’s a nice guy, but he gave the most insulting and demeaning presentation I have ever heard levied at appraisers, so I wrote about it [19].

Guilty or not of what the FHA claims, it seems very inappropriate that Quicken would still publish a sentiment index. In the new world of journalism turned upside down, there is an awful lot of free content out there that is really just free crap.

Podcasts I Love But Not Necessarily Relevant to Housing

Slate Money [20] – A regular listen for me. In The World-Changing Edition [21] which freshes our memory on what caused the housing crisis and relied on the author of the seminal podcast on the topic with This American Life called The Giant Pool of Money [22]. Here was my blog post from 2008 [23].

Martini Shot [24] – One of the first podcasts of any kind I subscribed to – this is a 3 minute weekly podcast by Hollywood writer Rob Long called “Martini Shot” (which is a Hollywood term that describes the final shot set-up of the day, i.e. the post-wrap drink. aka the “19th green” in golf). The show is not particularly relevant to housing, but I am writing about it because this week’s show is called “Sell The House [25]” and I can’t pass up a good housing phrase.

The Leap [26] is my new favorite. One of the best podcasts I’ve heard in a while was about the guy that invented Punk/Grunge music [27], inspiring bands like the Ramones and Nirvana. You’ll never guess who. I brought this podcast up to you, only because there is a related Housing v. Music segment below.

My friend Constantine Valhouli, founder of NeighborhoodX penned a cool op-ed piece this week in the LA Times – Straight outta Compton: What mapping L.A. through its music history tells us about our city [28]

We can also examine the neighborhood conditions that gave rise to what urban planners call “creative clusters.” No, not a vegan breakfast snack from that place in Silver Lake, creative clusters are places where the concentration of people living near each other leads to a cross-pollination of ideas, and an outpouring of music. (In the case of the Sunset Strip in the ’80s, an outpouring of Aquanet hairspray, too.)

I agree. And for what it’s worth, I have always seen music as a bookmark for a specific period in my life. Where I was living, who my friends were, etc. I prefer music over photos in many ways. Partly because that song coming out of the speakers takes you to that place immediately and your imagination can be much more powerful than an image.

Over the past week there have been a couple of articles that talk about Manhattan developers discounting prices to get sales moving again. Since the rising strength of the U.S. dollar, foreign investment (purchasing luxury condos) has been falling overall. Brokers are reporting declining sales office visits in these new projects which continue to enter the market in large numbers.

And with a protracted sales pace, the public can more easily confirm sales success in a building as sales close before the project is sold out. Joe Anuta of Crain’s New York did some sleuthing on 50 United Nations Plaza, the first super luxury building near the UN. In the best story title of the week “Zeckendorfs say their half-empty U.N. luxury tower is really half full [29]” with a 9% average discount offered in 2015 and a pattern of rising discounts for each of the past 3 years in the 4 year marketing window (green cells). 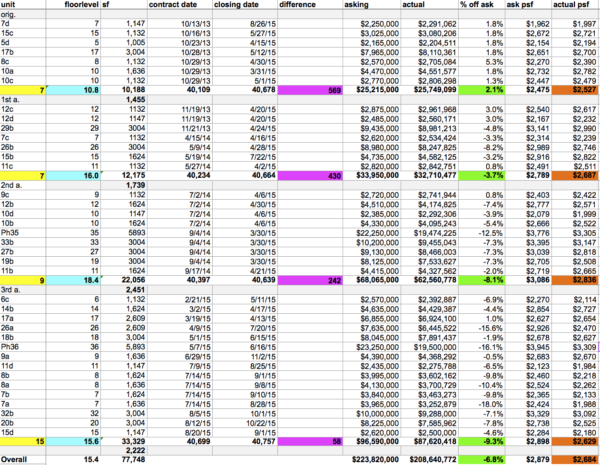 I think this is a good strategy by Zeckendorf. Developers have to project pricing out several years and when a market stops rising or priced too high, they have to adjust to the new market or their property will languish for years. As I like to say, “a flat or declining market can’t catch up to an over priced listing.”

And now there is another one. E.B. Solomont of The Real Deal wrote about how Toll Brothers is going to adjust their offerings to the market to speed up absorption. CEO says firm plans to get “aggressive” to spur sales at 400 Park Ave. South, 1110 Park [31] While most developers will resist this type of action and pray things eventually improve, the winners are going to be those who take action now. Just look at the rear view mirror for the additional 5,000 to 7,000 Manhattan condos entering the market in 2016. Competition is only going to increase.

That’s enough about rental housing, music and lobsters for now.

If you need more Rock Lobster [32] in your life (particularly on Friday afternoons), sign up for my Housing Note here [33]. And be sure to share with a friend or colleague. They’ll feel good, you’ll feel better and I’ll have plenty of seafood.