Wrapping Up The Housing Year With Lists, Checked Twice

It’s now that time when we pause and reflect on the past year and consider the year to come. Political polarization, new forms of terrorism and overuse of the word “uncertainty” aside, it’s been a pretty good year. My family is happy, healthy and expanding, our business is going gangbusters, I’ve made a lot of good friends and got to know old friends even better. I became president of a terrific appraisal organization and am getting to better know the industry as well as my appraisal colleagues around the country. My wife and I are new empty nesters so we have been traveling a lot more but remain very close to our four sons, helping them plan weddings and navigate the byzantine path to homeownership or finding a good rental. I’ve discovered the joy of the v8 HEMI and that there are people I can go to concerts with when I know the performer will deeply annoy my wife (think Dweezil Zappa).

I’ve continued to sit down each and every Friday morning and write these Housing Notes to a growing list of loyal readers. Thank you for words of encouragement, suggestions and feedback as well as sharing these with your colleagues, office-mates and friends. I look forward to continuing this effort with you in 2017. There are a lot of things brewing that need to be talked through.

This year I learned to better appreciate that a phone call is more powerful than an email – not for mundane tasks – but to reach out for help. Somehow tactile things have more gravity. Here is something to be said on the topic by Steve Jobs.

It is a year-end tradition to make lists of the most, the highest, the funniest, the etc. things that happened over the past year. Here are the highest priced U.S. sales (at/above $50M) that I’ve collected:

I compiled lists of the highest sales in Manhattan for these articles. Each publication takes a different angle and does a good job with the story line.

Talk about pent-up demand. This is why it is more important than ever for credit conditions to normalize.

In a super cool NY Times breakout of neighborhoods to look at how long it takes to make buying a better deal than renting, cost-wise. The research focused on neighborhoods priced below each borough’s median sales price based on Streeteasy numbers: $990,805 in Manhattan and $576,132 in Brooklyn – which are similar to mine. 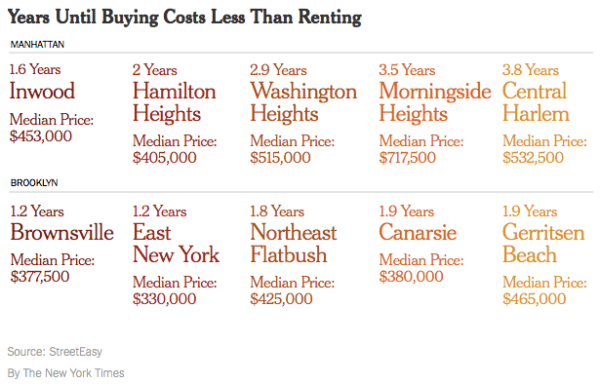 The “Michigan Left” and Other Turns

Here’s a diddy from one of my favorite podcasts, 99% Invisible. Now that there is a real movement from the city to the suburbs, it’s time you know more about intersections. 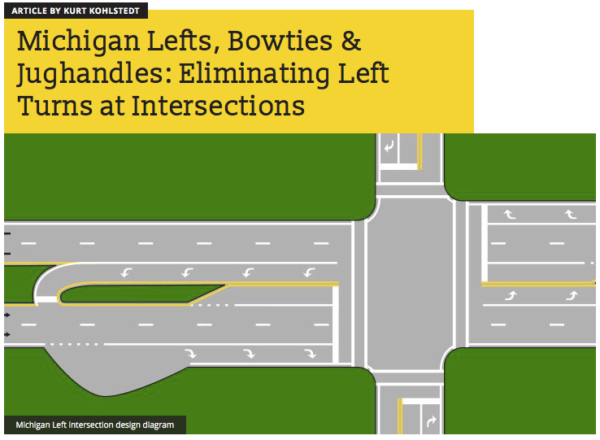 “When you have a 40-per-cent increase in prices in a year, the skyline should be absolutely saturated with cranes,” said Thomas Davidoff, head of the University of British Columbia’s Centre for Urban Economics and Real Estate. “That’s not what you see in Vancouver.”

This quote blew me away.

“Addressing the supply side is not only beneficial for housing affordability in the long term, but it adds these great things called jobs in the economy, and growth,” Muir said. “Weakness in demand is not that helpful. If home prices don’t rise as rapidly because you can’t afford to buy a home, would you call that an increase in affordability?”

I Love Detroit and So Does JP Morgan

Detroit has been a petrie dish in the study of rebuilding a dying urban space.

Appraisers have more close calls to danger than they can admit. I’ve had a few close calls myself. Before cell phones – during the beeper era – I remember walking to an appraisal a 3-family townhouse in Manhattan (we walk, take cabs or subways). By the time I was a block away, looking to arrive right on time, my beeper sprung to life. I debated whether I should call the office from the payphone on the corner or wait until my appointment was over. I opted to call my office using the bag of quarters I carried in my appraisal satchel. My office told me not to the inspect the house that day. Apparently, a tenant in one of the apartments was a military veteran who suffered from a severe case of PTSD. When the broker I was meeting knocked on this tenant’s door to open up the building for my inspection, he didn’t get a response. After a few more tries he opened the door with the key and the tenant rushed the broker and pointed a gun at him. The agent was understandably panicked and ran out. He came to his senses 10 minutes later and called my office who called my beeper immediately.

Joe Milkes, MBA MAI CCIM of Plano Texas started a petition on Change.org for AIM members to vote no-confidence AI BOD. I’d sign it if I was a member. The outcome of the petition is not important, it is the fact that such a petition was believed to be necessary that is so unprecendented. Many in membership are unnecessarily fearful of retaliation by AI National. I would think that is the illusion that AI National hopes will proliferate. Of course, I’m not concerned at all because I am neutral in this matter and would relish a conversation with a senior executive, board member or counsel of AI to discuss the facts so I can lay it all out in public. I’m only interested in making AI National relevant again.

RealEstateIndustrialComplex.com – a repository for information on AI National’s Policy Debacle

As we enter the holidays, I’m sure leadership at AI National is counting on complacency from the membership to drop their outrage over AI National’s already approved policy to take nearly all chapter funds and charge the chapters to do manage them. I’ve been writing and researching the amazingly tone-deaf policy by the Appraisal Institute for a few weeks, the latest in a long series of behavior that shows how little they interact with the chapters and membership. As of today, the issue has not died down and as someone just told me, it “now it seems liked a dried out Christmas tree on fire.”

I launched a repository for all the information that has been flying around the industry in recent weeks since my initial blog posts.

In a very clear and strongly worded letter (also shared on REIC), the chapter president wrote a position piece that seems to reflect the vast majority of chapters and members – here is an excerpt.

There are many issues facing the Appraisal Institute, such as the declining number of appraisers, the aging of the membership, AI National inability to offer timely educational offerings, the stagnation of appraiser fees and their incomes, the split with the Appraisal Foundation and the disastrous AI global expansion plan. The policy change decision along with these omnipresent issues over past six years calls into question the competency of the current national leadership. The Appraisal Institute is your organization and its strength comes from you the members. I urge you to take an active role with your membership. The first action step is responding to the announcements on changes in policy or governance coming from AI National.

Remember that this chapter is located in the same city as AI National and they are just as isolated from them as your chapter is.

I may be wrong, but there seems to be a very limited turnover of executives at the top of AI National – for example, the incoming president is a repeat president. No slight intended to this person, but with 18,000 members, is no one else worthy to fill that position? Isn’t it more important now to bring in new blood to save the organization from irrelevance? I’d like to suggest there should be term limits for all executives at AI National. Obviously, with the stealth culture, this is a pipe dream.

Why am I talking so much about AI National?

I left AI after their ridiculous exit into oblivion from the Appraisal Foundation a while back. The disingenuous video about how excited they were about the future was insulting and something a politician would say after they resigned from a scandal “to spend more time with their family.” The current AI President’s unbelievably insulting November 30, 2016 membership letter had the exact same condescending arrogance proclaiming “This is great news for the chapters.” All his letter needed was an exclamation point. So I decided to write about it using their own words. It has been awe-inspiring to see the membership respond to my initial post. The membership has awoken and there is a lot more coming so tune in.

If you need something rock solid in your life (particularly on Friday afternoons) and someone forwarded this to you, sign up here for these weekly Housing Notes. And be sure to share with a friend or colleague if you enjoy them. They’ll know that Santa likes suicide doors, you’ll learn how to hit 240 consecutive green lights and I’ll, well, you know.

Happy Holidays to all my dear readers and see you next week.