Are We Stoked? Or Will The Fire Go Out of The Housing Market?

Before I get into interest rates and housing, I need to talk about something relevant to that conversation…Yule Log Videos.

Years ago, before my wife and I moved out of the city, we lived in an apartment without a fireplace. To fill in the gaping whole formed by a childhood full of holidays with glowing fireplaces, I bought a 60 minute VHS cassette tape of a Yule Log on a whim. It somehow helped with the festivities, especially when halfway through a large arm enters the frame and stokes the fire a few times. Fast forward to a world with fireplace apps on our handheld devices and Yule Log YouTube videos [1] that can make us whole again. Our current home has 4 fireplaces but we’ve never used them. Thankfully we now have a new type of Yule Log Video: 45 minutes of a fire burning, scotch drinking, and Nick Offerman’s beautiful gaze [2].

There is a growing collection of gasoline cans sitting in the garage that will change the narrative for housing. We’ve seen employment rise over the past few years but stagnant wages and tight credit were holding back pronouncements of a normalized housing market. In other words, the housing market has been portrayed as Solid as Sears [3].

Employment has recovered [4] (sort of) 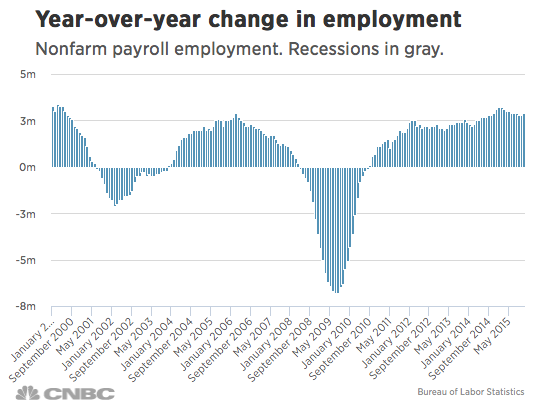 and wages are starting to rise [5]… 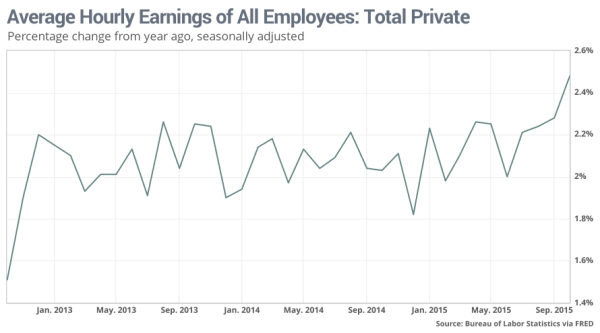 and household formation [6] is expanding. 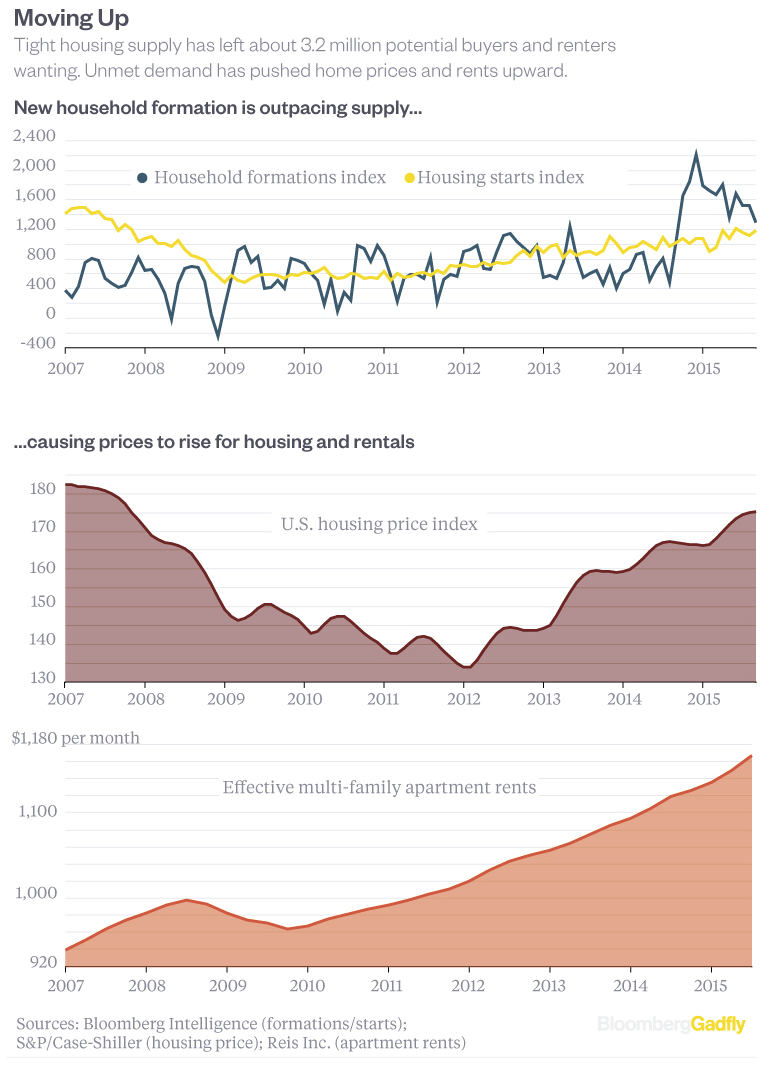 Housing supply (especially affordable supply) remains limited and there are estimated to be some 3.2M potential buyers and renters that need housing [6].

The remaining hurdle for housing to normalize would be the return of reasonable credit standards. By normalize, I mean that banks are less risk averse and apply common sense when lending mortgage applicants. As I’ve mentioned many times in the past, tight lending conditions are keeping inventory low and therefore placing pressure on housing prices.

However, that’s nearly impossible when the spread between short term and long term rates are tightening [7]. In other words, long term rates remain low and stable while short term rates are rising quickly as a Fed move to raise rates appears more likely. Banks borrow at short term rates and lend at long term rates and live on the spread between the two. With a compressed spread, banks have a lower margin of error to work with, ergo less tolerance for risk (aside from impact of continued multi-billion dollar fines and that is what lawsuits [8]) keeps credit conditions tight, if not tighter than they were a few years ago (which was also a period of very tight credit conditions). 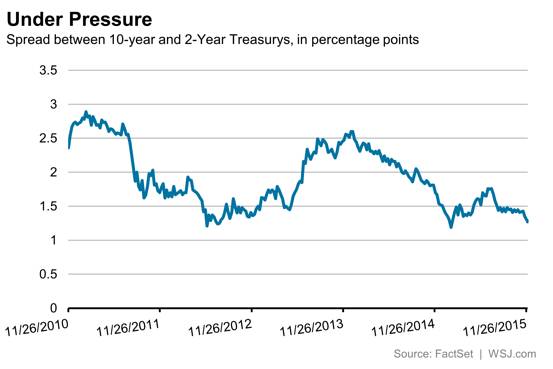 The key problems for housing still remains in place despite improvements on other fundamentals – tight credit conditions – largely because of the legacy of bad lending decisions that have little to do with today’s market.

Here’s a good explainer at Citylab why the housing boom is not a bubble [9].

The Fed is now widely seen as raising rates at their next FOMC meeting this month. Fed chair Janet Yellen seemed to say this in a recent presentation [10]. I have held the view (based on nothing but gut) since 2012 that a rate rise wouldn’t occur before 2016 (so I’d be a month off). Perhaps the beginning of a protracted period of very small rate increases will help normalize mortgage lending standards to expand housing transactions across the markets.

Speaking of the Fed, the Beige Book [11] was published this week. It’s an anecdotal narrative about the U.S. economy through the eyes of their 12 member banks. (I’ve been a long time resource). I know data analysis is important and that anecdotal is not data, but I highly recommend you read this publication and zero in on your region. It’s a great narrative on perceptions about different aspects of the economy. On the overall U.S. housing market:

Explainers About The Coming Rate Increase

Here’s a terrific discussion on Bloomberg Television with Chris Whalen [12] of Kroll Bond Rating Agency, Inc. on why interest rates need to rise. [sorry for small size, I couldn’t figure out how to create a larger embedded version]

And my friend Barry Ritholtz [13], columnist for Bloomberg View does a fantastic interview on Bloomberg Radio for his show ‘Masters in Business’ with David Rosenberg, Chief Economist and Strategist of Gluskin Sheff + Associates Inc. [14] They talk through the state of the economy. David is a wonderful explainer and this is worth a listen.

Kindling of Housing and Mother Nature via Curbed Network

Since kindling goes “under” the fire, I thought I’d emphasize a few loose sticks and twigs before this whole analogy thing burns out.

My friend Alexei Barrionuevo who writes for Curbed National and sees the housing market through his documentary on Electronic Dance Music [15], touches on rising sea levels and the potential impact to luxury real estate development [16]. It’s a great read and he teaches me a phrase I hadn’t heard before – “sunny day flooding.”

“Sunny day flooding,” like what I experienced between West Avenue and Alton Roads two years ago—where I found myself having to ride a bicycle through a virtual moat to get to my neighborhood Walgreen’s, with my feet spread in the air to avoid the splash—simply can’t happen if Miami Beach is going to continue to sell condos for ever-rising dollars-per-square-foot.

New York City has mastered the elevated park concept with The Highline [17]. Rethink an abandoned elevated rail line and it becomes a magnet for tourists at record numbers and a powerful stimulus for housing development along it’s path. We have a potential new one in Long Island City, Queens as presented by Curbed New York [18]. 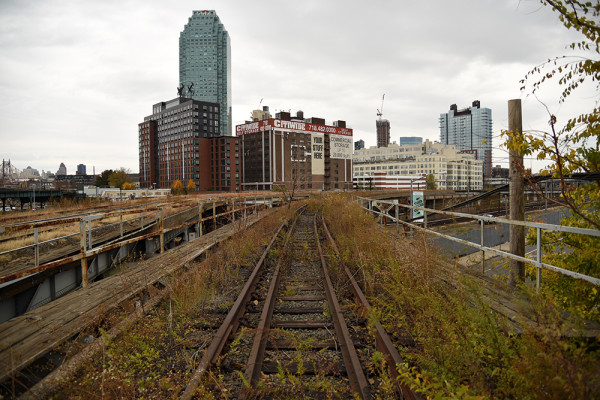 I never get tired of reading about large home sales in Detroit, via Curbed Detroit [19]. Here’s a 35,000 square foot beauty for $1.55 million. I guess I’m jaded but that is roughly the price of a 900 sqft Manhattan 1-bedroom condo. 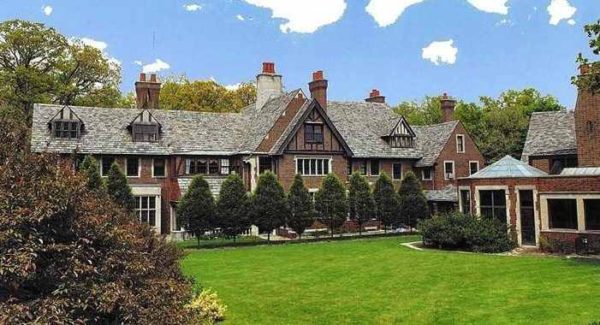 Here are a few housing chart galleries for markets I research: 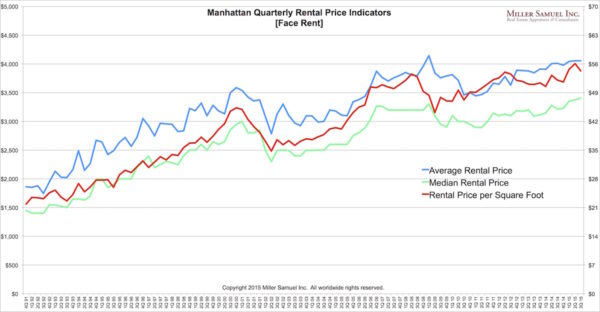 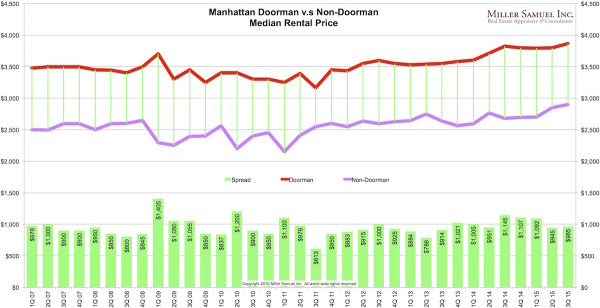 And a few from the Hamptons, New York [23], the site of last week’s Tryptofan fueled holiday party. 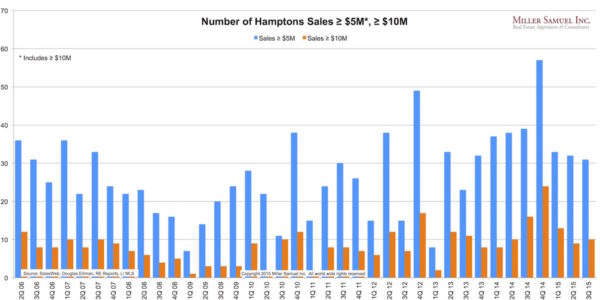 If you need red hot embers in your life (particularly on Friday afternoons), sign up for my Housing Note here [26]. And be sure to share with a friend or colleague. They’ll feel good, you’ll feel better and I’ll feel warm & fuzzy.