After years of discussion, thousands of hours of intense study, and never-ending efforts to help Housing Note readers visualize the housing market, this is what I came up with to answer all market questions (I have no idea who the video source is):

As my Housing Note readers should know by now, I’ve been the author of the expanding Elliman Report series since 1994 for Douglas Elliman Real Estate and it’s my labor of love (had to throw in a Valentine’s Day reference). The rental market continues to see falling prices and other signs of significant weakness which has helped bring in record new lease signings through the combination of tenants playing musical chairs to find a better deal and an influx of demand from outside the city.

The state of the Manhattan rental market is of great concern to the securities industry, of which Bloomberg Terminals are a proxy. The Bloomberg piece on the Elliman Report results for the Manhattan January rental market was the 2nd most emailed article on the ±350K Bloomberg Terminal subscribers worldwide. Initially, the story was the 4th most emailed in the morning but I was convinced it would overtake the Crypto Kid story, and it did!

And if that couldn’t be any cooler, Bloomberg has two different versions of the chart in the story. 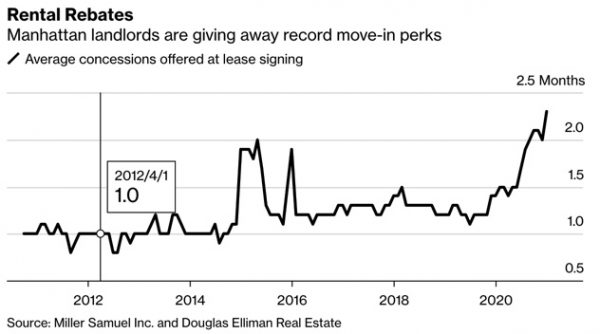 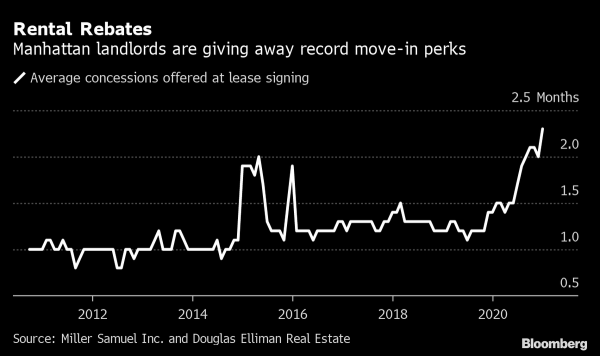 “For the fourth consecutive month, new lease signings rose to their highest level for the current month since the financial crisis.” 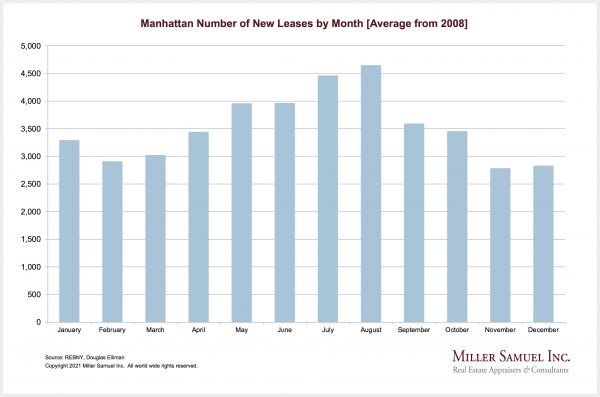 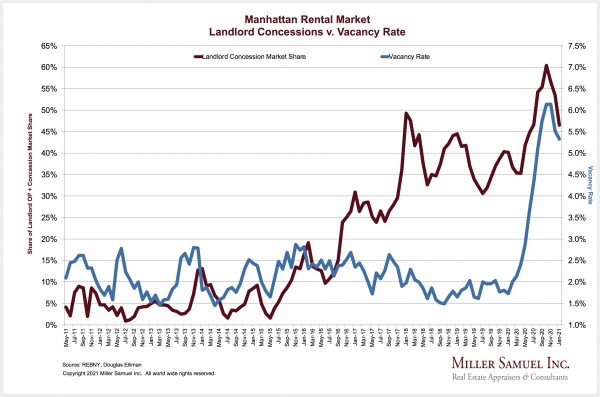 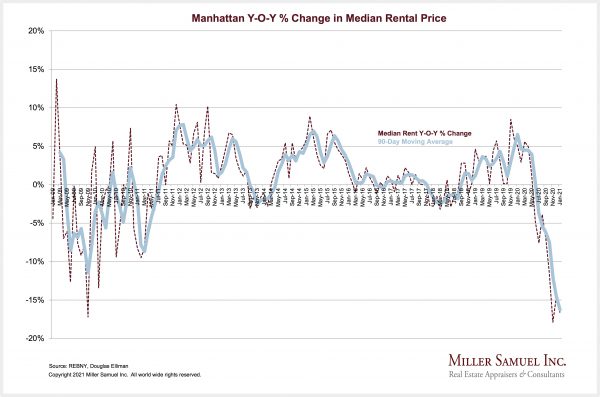 “For the third straight month, new lease signings rose to their highest level for the current month since the financial crisis.” 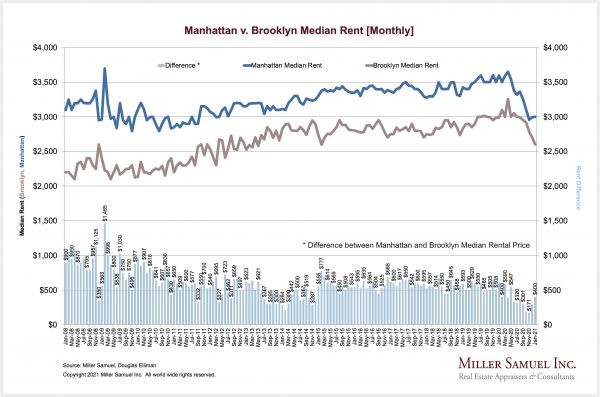 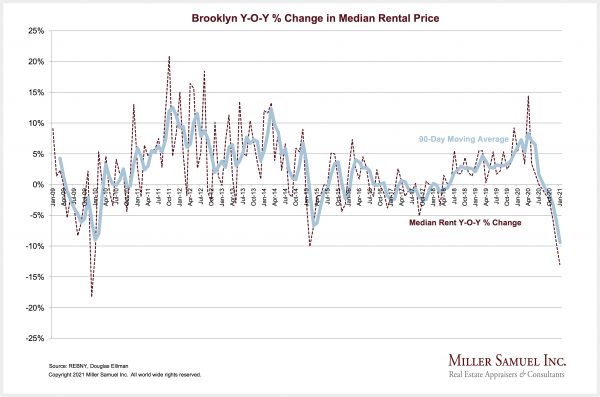 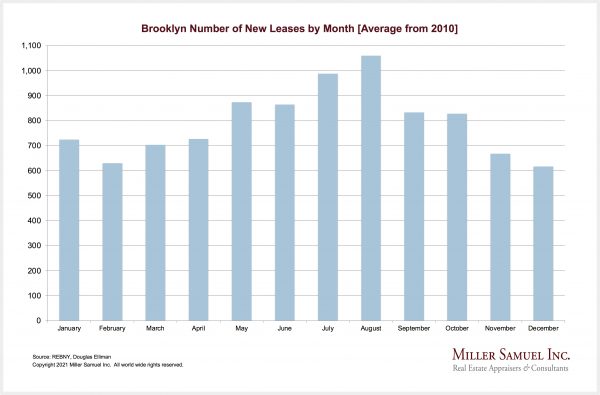 [Northwest Region]
“Net effective median rent fell annually at a record rate this month and was the ninth straight month with a decline.” 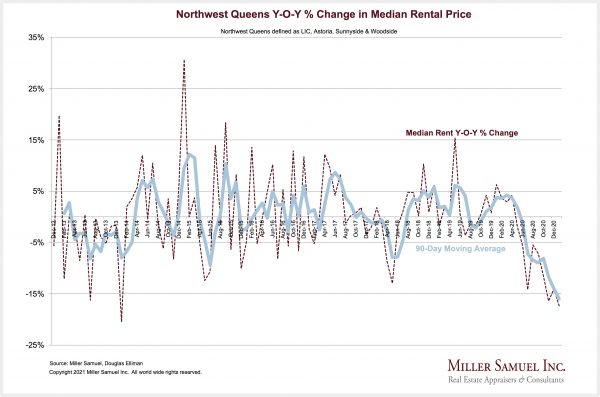 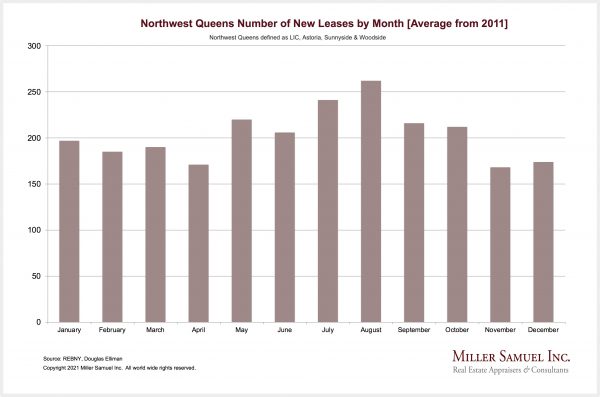 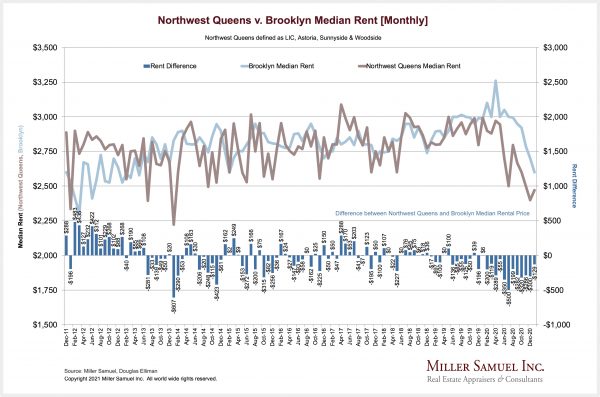 With the housing market’s dependency on low mortgage rates these days, should we worry about inflation looming in the future? Remember all those hyperinflation cranks of a decade ago? It was terrifying to many.

Newsday published a piece on the NYC metro area as seeing some of the lowest rental gains in six decades.

Rents for apartments, houses and other primary residences in the 25-county region that includes Long Island rose 0.9% in January compared with a year earlier, the federal Bureau of Labor Statistics reported on Wednesday. That’s the smallest year-over-year increase since 1958.

Many who read the headline of this piece probably were confused given the strength of the regional housing narrative. On top of that, the housing component of inflation converts sales activity into their rental equivalent. Here’s a post from 2006 that covered this topic: At The Core Of Inflation, Housing Sales Are Merely Rentals

In other words, we have a booming “for sale” market nationwide and a much more modest rental market (its a train wreck in NYC from the landlord’s perspective), yet the rental market is used to calculate a large portion of CPI (inflation) instead of the sales market.

So our fundamental understanding of inflation is flawed and then this…

My friend and prolific analyst of everything Barry Ritholtz, penned an extraordinary piece in his Big Picture Blog this week called: Stop Stressing About Inflation. Read it.

But Inflation is not inevitable. There are numerous countervailing forces that have been at work for much of the past 50 years. The three big Deflation drivers: 1) Technology, which creates massive economies of scale, especially in digital products (e.g., Software); 2) Robotics/Automation, which efficiently create more physical goods at lower prices; and 3) Globalization and Labor Arbitrage, which sends work to lower cost regions, making goods and services less expensive.

On Matrix: Zillow Gets Pillowed

I met Rich Barton, Zillow CEO, at an Inman/Curbed party held during an Inman conference in Manhattan a long time ago, the evening before Zillow’s launch. I asked Rich, a very nice and fascinating person, what he did for a living, not realizing he was the co-founder of Expedia. Ugh. He also said they were launching their latest effort the following morning – a web site called “Zillow,” and he added “as in rhymes with pillow” to the description. Little did I know real estate would never be the same after that.

So this weekend’s SNL skit on Zillow was particularly delicious with all the “pillow talk.” Even Rich got a kick out of it.

Wait. Have we been marketing @zillow wrong all these years??? #SNL https://t.co/sPpx4S5ohq

Ted Alexandro Said SNL Stole His Joke, So He Asked for a Million Dollars [VICE]

Dear @SNL, since you stole my Zillow joke last night please Venmo me the sum of 1 million dollars. My full special Cut/Up is on youtube if you need more ideas. pic.twitter.com/lC3yBpcs1h

Plus their purchase of Showingtime shows they are owning the Brokerage Industry space.:

Barbara Wagner: One Of The Best Publicists In The Real Estate Business Launches Her Own Firm

My close, long-time friend Barbara Wagner decided to strike out on her own with BARBARA WAGNER COMMUNICATIONS, LLC. I worked with her for years through Douglas Elliman for our Elliman Report series and she was an important part of its success. I have always cherished her insights. I don’t need to wish her good luck with this effort because this effort is not about luck – it’s about a proven track record, extensive experience, great judgment – and she is also a very nice person. 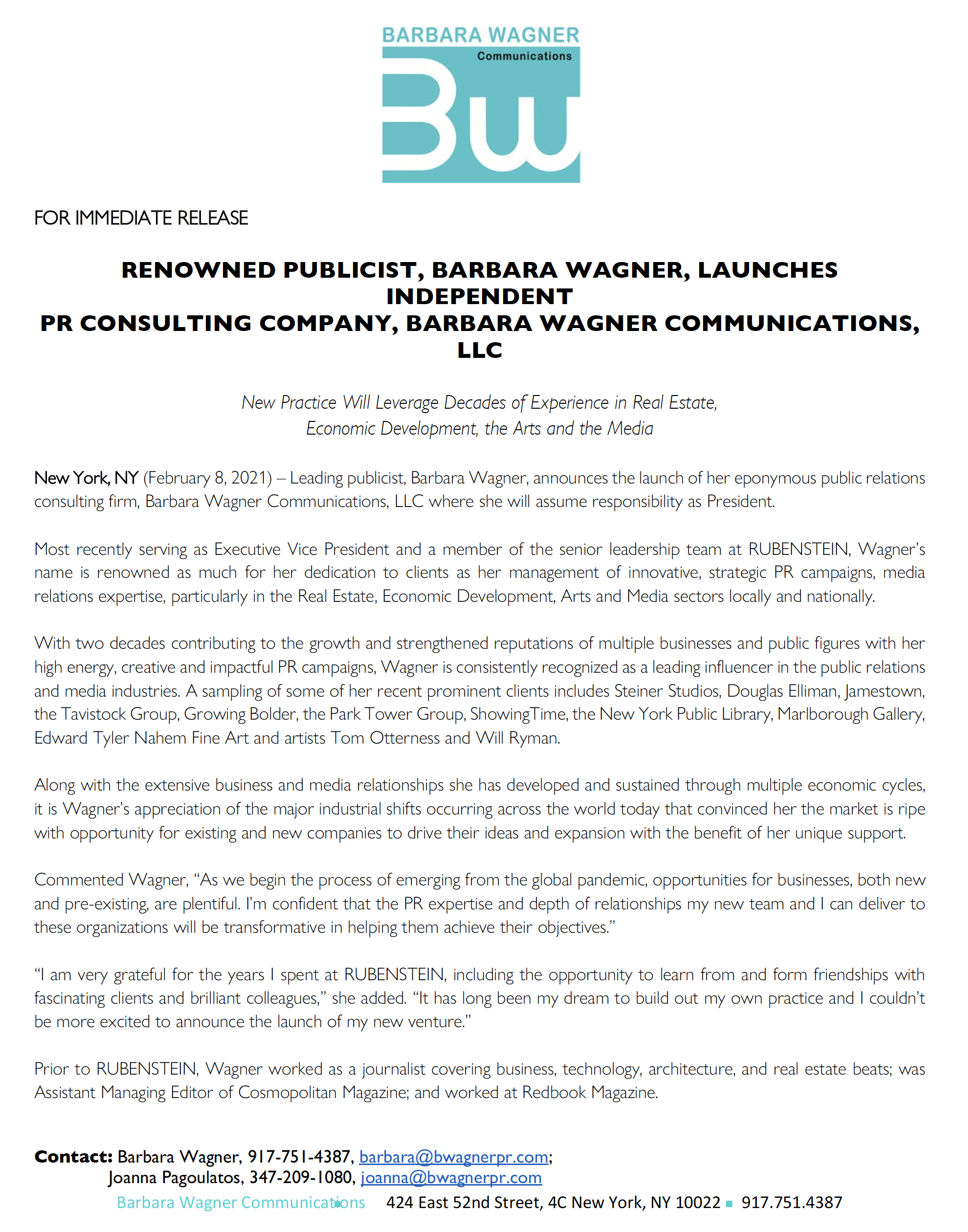 The NYC rental market is seeing a surge in new leasing signings as consumers are being drawn by newfound affordability.

I have friends that are real estate agents for Compass but I have always been clear about my concerns about their branding as a technology company. As far as I can tell in public information and conversations with people who used to work there, Compass looks like a traditional brokerage model, much like Andrew Ross Sorkin concluded on CNBC a few years ago when interviewing Compass co-founder Robert Rifkin.

Housingwire shares a compelling history of the birth and life of Compass as the founders try to cash in on a massive public offering: Inside Compass’s colorful past and publicly traded future

Like an over-budget blockbuster movie, Compass may never make money.

This is how I long described them which was captured in the piece: “Compass is a disruptor by capital, but not by ideas.” Even if the founders are successful in cashing out, what sustainable business model remains?

Perhaps my friends will make some money from the people that aren’t paying attention. 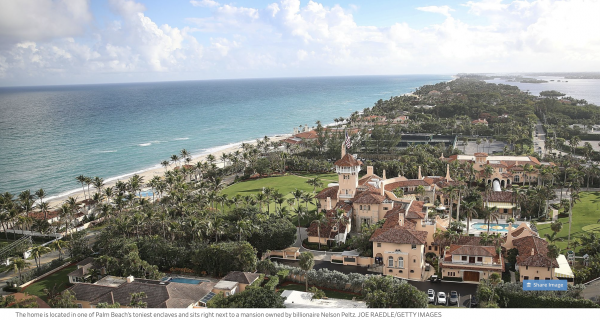 Why It’s Hard to Buy a House in Detroit, Especially if You’re Black

I found this podcast quite compelling. Incidentally, I listen to this Gimlet-Media-produced WSJ podcast “The Journal.” every business day.

Knight Frank compared our Douglas Elliman rental research with their findings in the Canary Wharf market outside of London and the patterns were the same. The sharp decline in rents is bringing in more tenants.

The following charts are Knight Frank’s redesigned version of those that appear in the our Elliman Report: January 2021 Manhattan, Brooklyn and Queens Rentals. 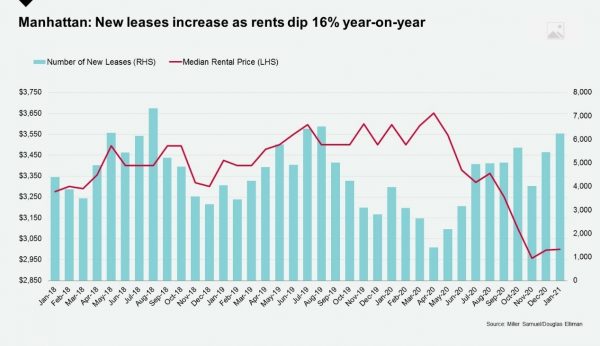 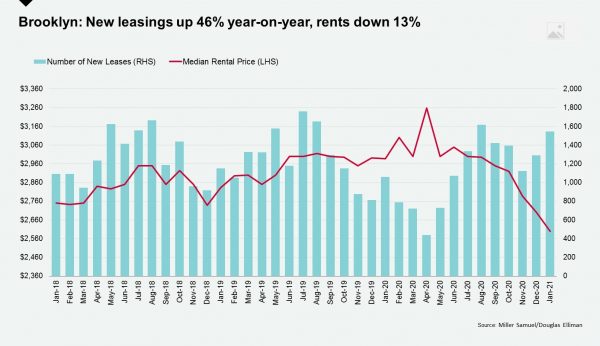 Last weekend our firm got a mention on a New York Times cover story about the pandemic’s impact on Hudson Yards, the massive new project on Manhattan’s west side that was more than a decade in the making.

How the Pandemic Left the $25 Billion Hudson Yards Eerily Deserted

I was walking down the driveway to grab the morning paper last weekend and saw the cover story and remembered connecting with one of the reporters a few weeks prior. It’s the 19th time I’ve felt that rush since 2000 when I had my first mention. Since I am a list maker (and quite a shallow person), I’ve got them all chronicled in my Evernote app. Here was the first one from 2000: Prices Starting to Stabilize For Housing in Manhattan After A Breathless 4 Years.

Fannie Mae Is Serious About Their Noble Videos

It is it just a coincidence that Fannie Mae calls their well-done appraisal video appraisal series, “The Noble Appraiser Series” When Phil Crawford and Lori Noble are about to launch their Continuing Ed for Appraisers Program called “aNoble Education” named after Lori when the business was formed in 2018?

Still, Fannie Mae has done a great job with their effort. I’m not that sharp but I got some nuanced pointers from them.

Noble Appraiser Series #1 – The Myth of the One-Mile Rule

The gist of this 45-Day notice is to allow those being compensated to have the potential or perceived to be in a position of influence to determine what their compensation is. This is a scheme to keep the control of the organization by FOJs (Friends fo Jim Amorin)

The lack of ethics of AI leadership over the past decade has severely damaged the value of the designation brands already and I predict the value of both the MAI and SRA designations are meaningless in 5-6 years. This damage is because those designations are issued by an organization that has unethical leadership for all eyes to see. This 45-Day Notice can’t be any more flagrant and essentially criminal.

Like the sham election petition process, this is blatant corruption. Jim Amorin isn’t even hiding it anymore. Membership is outraged. Here is a brilliant summary of what is so wrong about the 45-Day Notice by Mac Bottum, MAI in Texas, a long-time, highly respected, and active member of the Appraisal Institute:

Any board member who doesn’t see the corruption of this salary maneuver needs to step down from the Board of Directors or be subject to potential legal exposure as this devolves into future litigation.

All Appraisal Institute members should send an email on their views to 45daynotice@appraisalinstitute.org. The National Board of Directors will vote on the amendments at its February 25-26, 2021 meeting so time is running out.

Here are some tips shared with me from membership to prevent what transpired at the last Board of Directors meeting and the disrespect shown to AI President Rodman Schley, MAI, SRA who has shown leadership on the board already.

Here are my distilled thoughts from all the feedback I received to Rodman:

Please take control, your members are counting on you to prevent this self-dealing institutional takeover.

At the last BOD meeting, I was told I got a shout out by name by an FOJ who complained that “Joe Miller” has been writing about the board meeting immediately after they end.

My response: My name is “Jonathan Miller” (my middle name is actually Joseph, so Joe isn’t far off) and yes membership is tired of being ignored and FOJs have not been held accountable for their self-dealing at membership expense.

So much more to discuss next week. 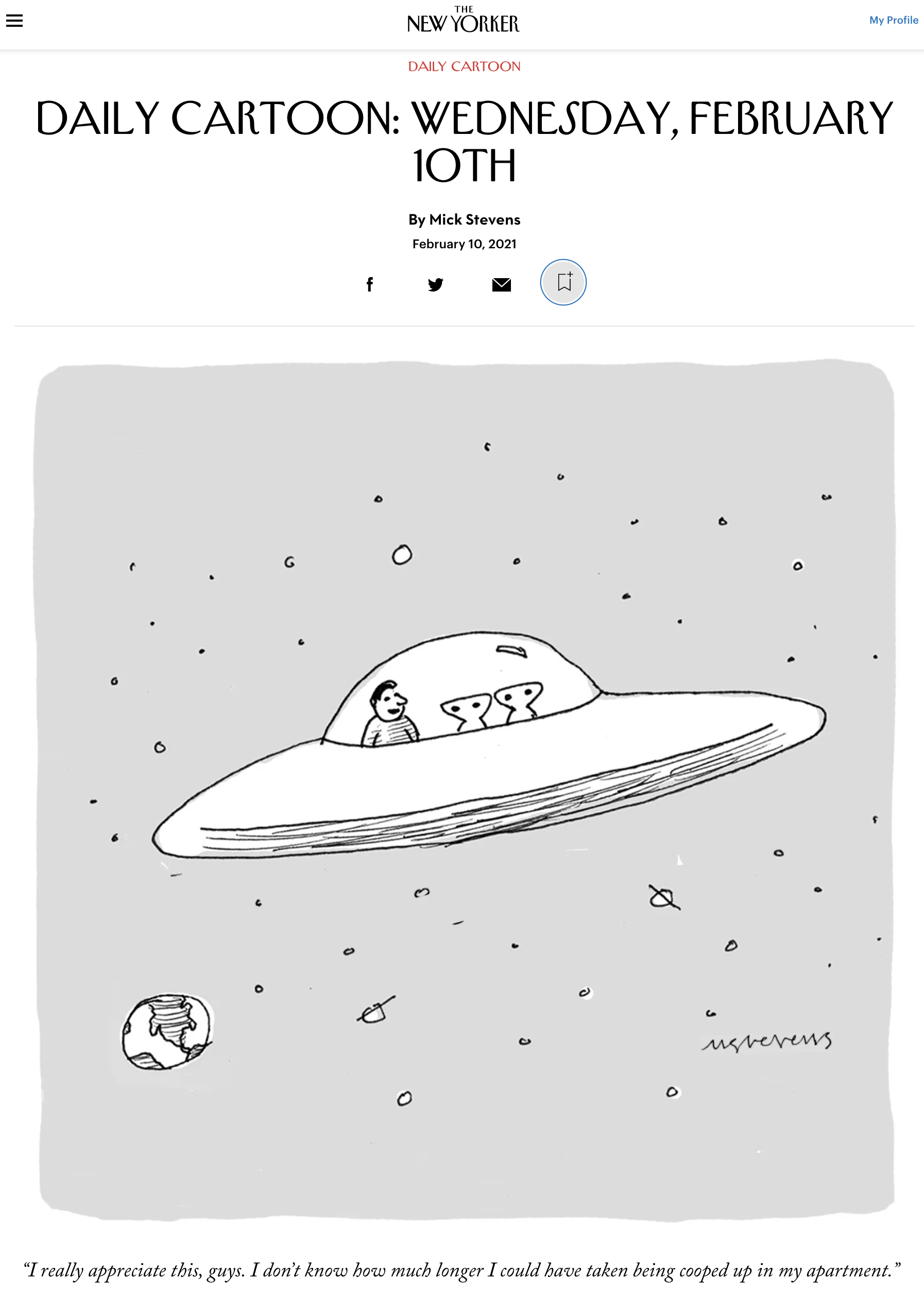