Real Estate Reality, What A Concept

This week’s title was adapted from the 1979 Grammy Award winning Robin Williams album. I am finding it harder to glean reality from the housing market while being bombarded by spear-fishers and hackers. The Appraisal Institute twitter account, (the largest real estate appraisal trade group) was just hacked.

The resurgence, if not epidemic, of spear-fishing is annoying. My wife, our CFO, got this email from “me” asking my wife to wire $125K to Hong Kong. LinkedIn seems to be one of the ways this is initiated.

Housing Reality Is As Limited As You Want It To Be

Here’s a design for a new housing development in Kazakhstan:

Once you’ve warmed up, here are some reality disconnects to consider:

Record Prices Do Not Equal Healthy With weak economic conditions and/or monetary policy that distorts consumer behavior, high prices across the Eurozone are anything but a sign of strength.

Theory of Negative Milestones Throughout my 30 year career as a real estate appraiser (started when I was 5, obviously [tag: old joke]), I have found that stakeholders in the market fight the “market is weakening” message to a point where it damages their position more than it would have if they adjusted more quickly. However once there is a visceral event i.e. Lehman Brothers bankruptcy, collapse in oil prices, etc. they quickly adapt and do not look at the market before the event occurred. In other words, an analysis of the pre-event market is no longer relevant in the current market. I wrote about this over a decade ago in Matrix In Good Times and Bad, Negative Milestones Often Define The Real Estate Market. It holds up well as we look to see some new milestones set in the near future.

Dogs & Cats Are Making Real Estate Decisions I can understand that people love their pets (we have two cats and my wife and kids love them) but I’m not quite in sync with this line of thinking.

Next-door Neighbors Are Not Exempt from Being Irrational This local news story in Texas doesn’t specify but I can only imagine the type of inappropriate music the neighbors are playing to stop the use of the playhouse. If we had this problem and the neighbors were playing say, Lawrence Welk big band music all day, I’d fear for my children’s future. But that’s just me.

When Housing Market Data Gets Manipulated

There is a lot of concern right now about housing as we transition (already have) to this next market condition. This has been made worse by stock market volatility which gets industry participants nervous. Or we can just be sedated.

The industry has been building a lot of luxury product in recent years and the pace of absorption has been cooling. For Manhattan the decline in new development contracts has been talked about and speculated over quite a bit over the past 18 months. Since there isn’t hard data to illustrate it (not public record) the topic remains fuzzy even though most everyone in the market can see or feel it. I am following it through the lens of new development listings. Here’s something I wrote to a real estate agent recently, who was asking about the inconsistency between new development days on market trends (shows the market slowing) and monthly absorption rate of new development (showing a rapidly paced market) in our recent 4Q2015 report on Manhattan sales. Hint: The DOM trend is the reality.

One of the more interesting phenomenons that has occurred in the past 2 quarters has been the sharp drop in new development active listings. This does not refer to the number of units being constructed which is rising rapidly, but the amount developers choose to put into the public domain (i.e. offering) as an active listing. Developers don’t put all their units in a particular project online all at once for obvious reasons. New development inventory fell about 50% YoY (the same thing happened in 3Q15 yoy) because overall demand for new development slowed in 2015 for many reasons. Why place the same number of listings on the market when the pace has slowed? The developers get left with listings that have longer marketing times. By dropping the active listings by half reflects developers holding potential active inventory off the market for the second half of 2015 and it made the absorption rate fall dramatically (calculation: active inventory/monthly sales – numerator was chopped in half, so the absorption rate fell sharply) The 4.2 rate is the result of this behavior and not reflective of market conditions. However the days on market increase measures the average marketing time for all sales that closed in the period (from last time price was changed, if ever, to the contract date). That number can’t be controlled and is more reflective of the condition of the market – new dev properties are taking longer to sell.

Here is a chart I created to show the disparity between reality and skewed data available. 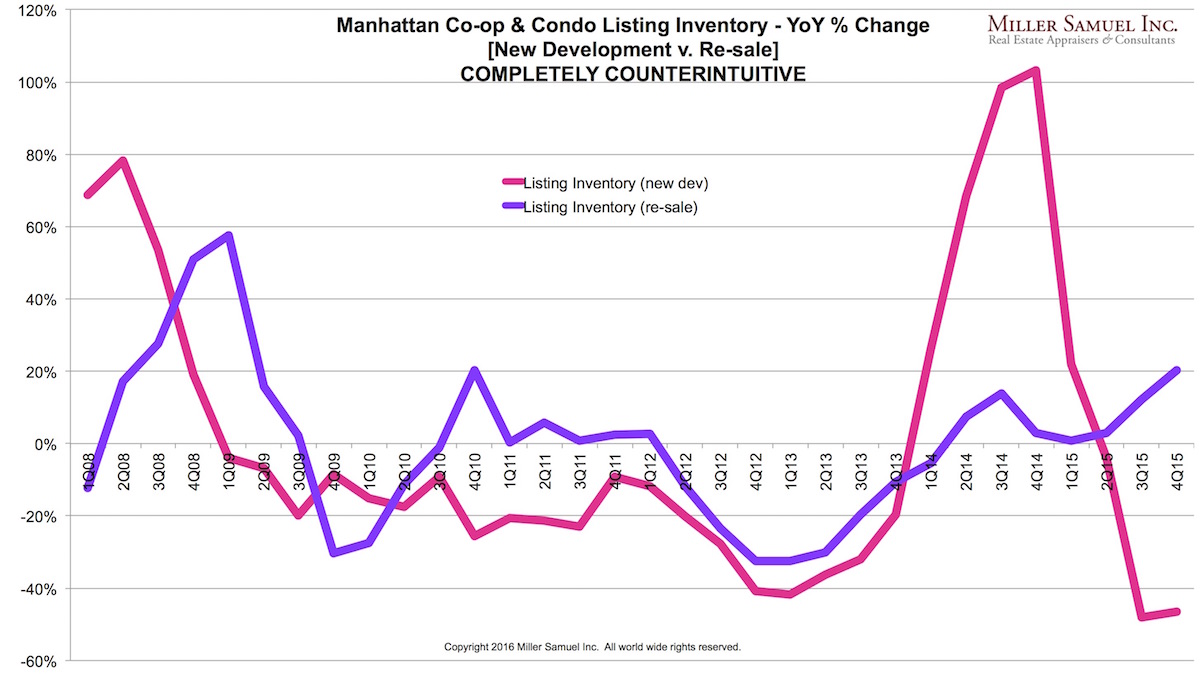 Developers are generally not speaking to the change in housing market conditions at the high end which I believe is probably a tactical error for some. We saw this pattern in the prior new development cycle. With the 5,500 condos that came online in 2015 and even more slated for 2016, the pricing that was set about two years ago may not be relevant anymore for some developments now. I would think it is to the individual developer’s advantage that have wiggle room on pricing to take a look at all the new completion entering the market to compete with them and consider the alternative of remaining frozen. Those who had a low going in basis from earlier site assemblages have more flexibility over later entries. Just a thought.

More About Tall, Less About Big

Here are a couple of good reads on the hot topic of Manhattan foreign or wealthy buyer secrecy (and many of them are buying in tall buildings):

This piece in Citylab Over the Past 5 Years, the Number of Super-Tall Skyscrapers Around the World Doubled speaks to my Theory of Negative Milestones I mentioned earlier. I generally disagree with the source piece for this article from 2012 – I am not arguing whether it correlates or not – I believe this cycle is more about the volume of construction than new heights being reached.

Besides advances in materials and engineering to construct these super talls, there have been other ways to get more built in this cycle. Think mechanicals.

Sometimes a tall doesn’t mean new either. Old and massive can be new as well. The former BNY building at 1 Wall Street is going residential. Hey I’ve been in the observation room before that was mentioned in the article – I remember it felt like we were in a maze using a series of stairs and elevators to navigate to it. 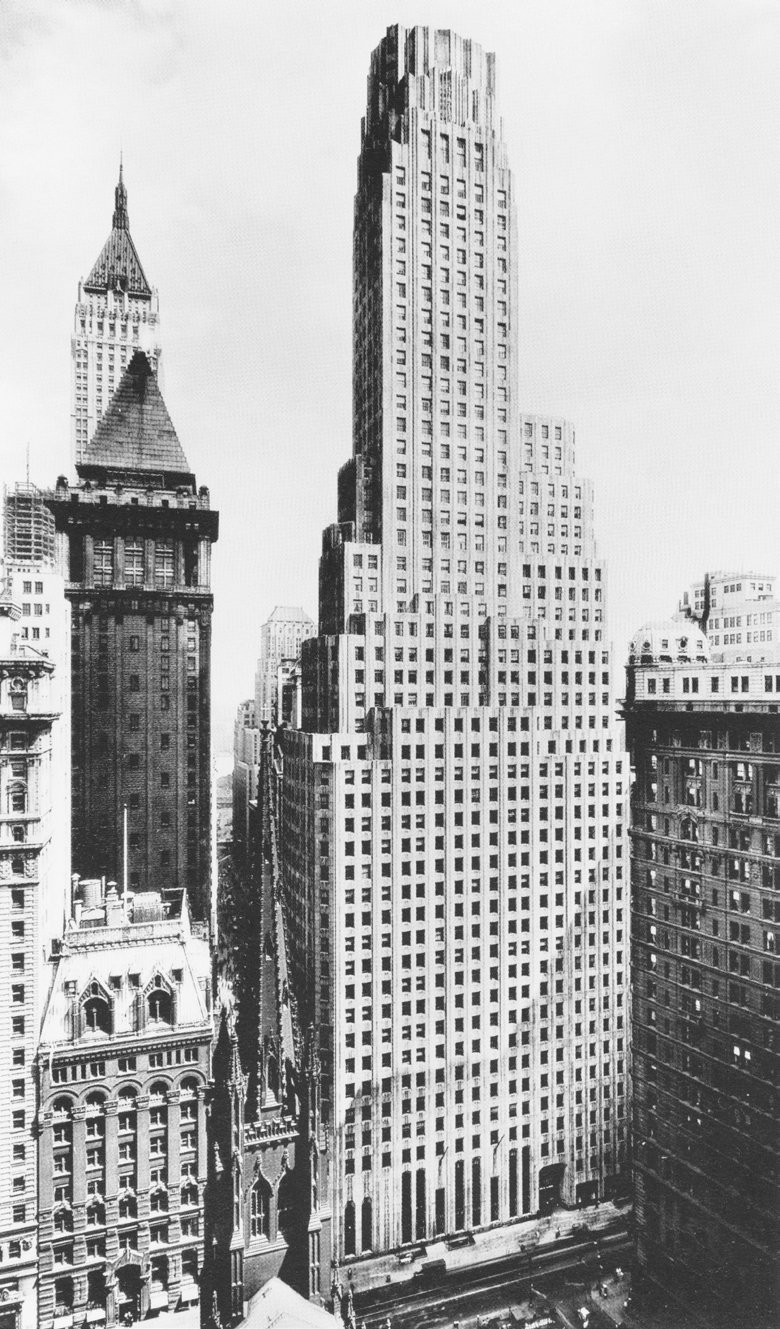 Of course what goes or is up, can come down. Although the safe is missing and no money was found in the former home of Pablo Escobar, the “King of Cocaine,” was demolished.

These South Florida Markets Have Transitioned from Frenetic to Modest Growth

We released our South Florida research this week, part of the Elliman Report series that has been an expanding effort of ours for the past 22 years. Douglas Elliman is the 4th largest U.S. real estate broker and the largest for Miami. In reference to Miami, the Real Deal South Florida covered the report release where I so eloquently stated:

Here are the report summaries and links: 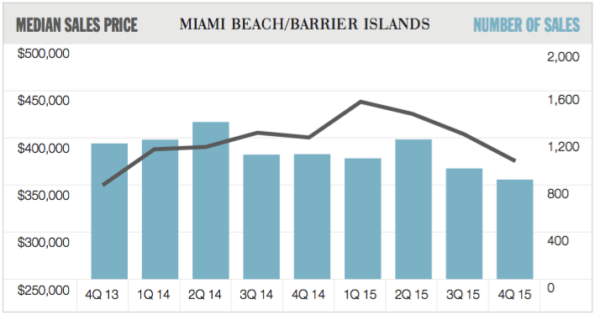 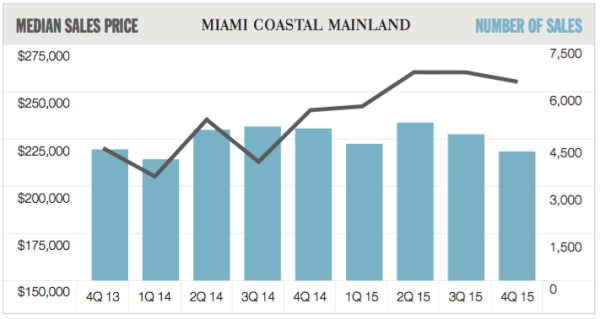 Elliman Report: Boca Raton Sales 4Q 2015 Price indicators for the overall Boca Raton housing market increased as both listing inventory and the number of closed sales declined. Single family median sales price increased 4.6% to $390,000 from the year ago quarter. Condo median sales price showed the larger gain, rising 9.1% to $180,039 over the same period. In the luxury market, representing the top 10% of all sales…

Elliman Report: Palm Beach Sales 4Q 2015 Palm Beach sales fell from year ago levels, restrained by falling inventory, causing new price records to be set. Condo sales fell 26.4% to 39 from the year ago quarter. Single family sales followed the same pattern, falling 26.1% to 17 sales over the same period. Overall inventory fell 7.3% short of year ago levels to 419 as condo listing declined 14.2% and single family listings increased 15%. As a result, the pace of the overall market slowed…

The Ending Is Clear

While I’m not quite sure how housing will play out in the next few years, my friend Constantine Valhouli, founder of NeighborhoodX shared this amazing mashup. Apparently AC/DC seems to know how each of their songs will end. Here is every one them.

If you need something rock solid, or just more rock in your life (particularly on Friday afternoons), sign up for my Housing Note here. And be sure to share with a friend or colleague. They’ll be more audible, you’ll feel like musically inclined and I’ll dust off my Fender guitar.