Commuting By Vertical Travel When Your Home Is Nearby 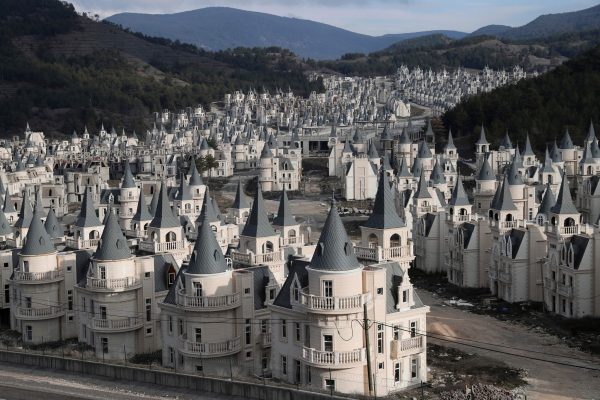 Douglas Elliman just released our research for the Hamptons, North Fork, and Long Island markets (I’ll have the links up shortly) covering the fourth quarter. The Hamptons and North Fork showed an acceleration of weakness and long Island showed more (but unexpected) strength.

Here are some key points for each market and some charts:

“A shortage of listings “is what’s driving prices up, because there’s still limited inventory,” said Ann Conroy, president of the Long Island division of Douglas Elliman. “That’s what’s keeping the prices where they are and pushing the prices up.” 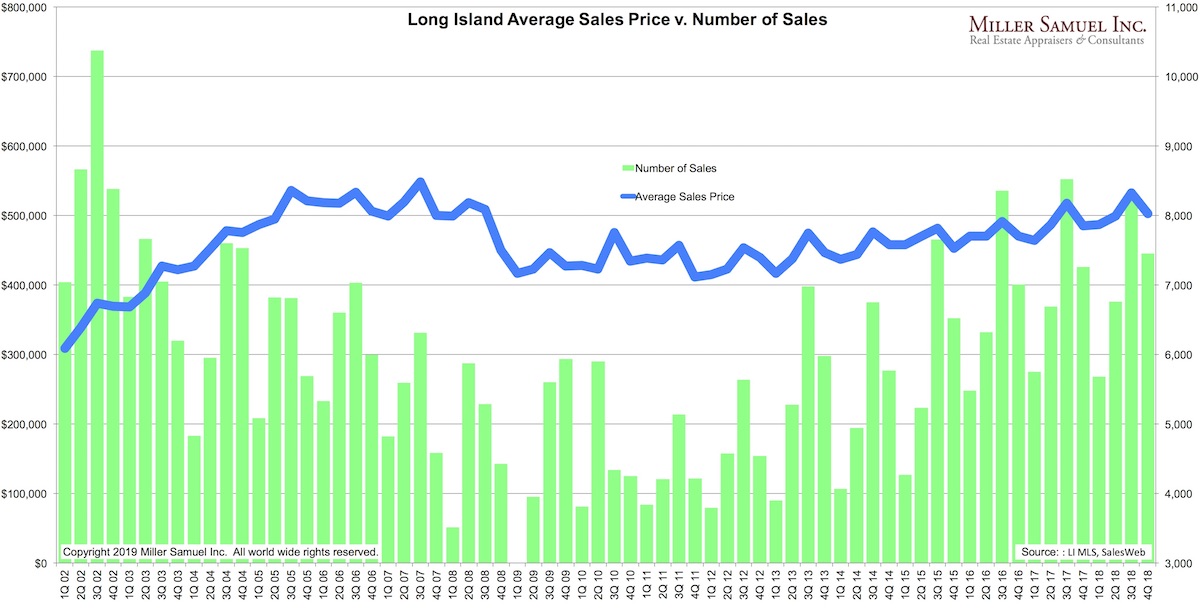 “Would-be Hamptons buyers have been dragging their feet, betting their money is better off in the stock market, or reluctant to commit to discretionary purchases after a federal tax overhaul that capped write-offs for mortgage interest and property levies. With so much inventory, sellers will have to drop their prices to attract interest, said Cia Comnas, who oversees sales in the Hamptons for brokerage Brown Harris Stevens.”

…and a cool chart from Bloomberg: 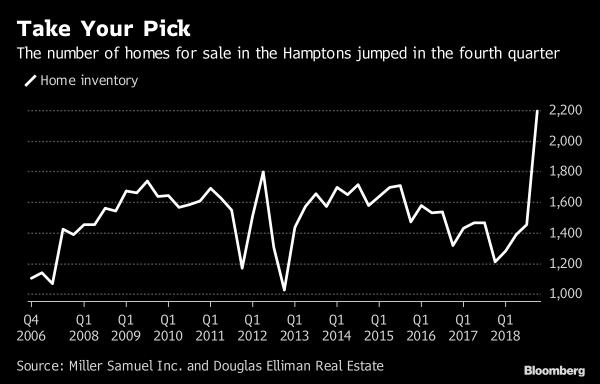 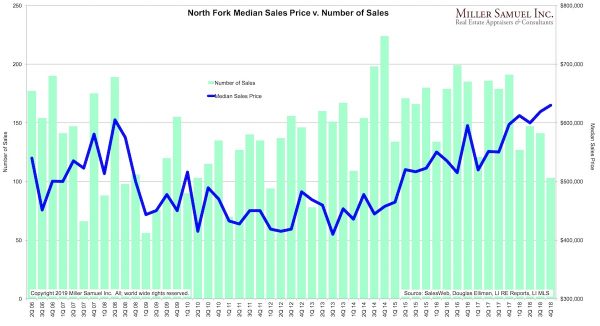 “The number of market-wide sales rose year over year for the first time in 2018.” 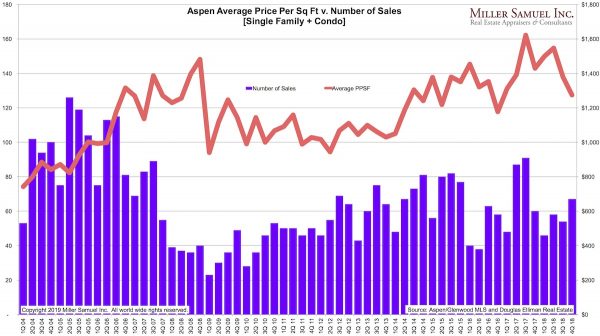 “Rising sales has been on a multi-year streak as sales mix emphasized smaller properties.” 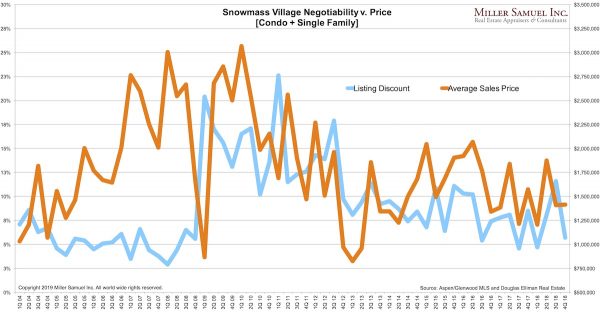 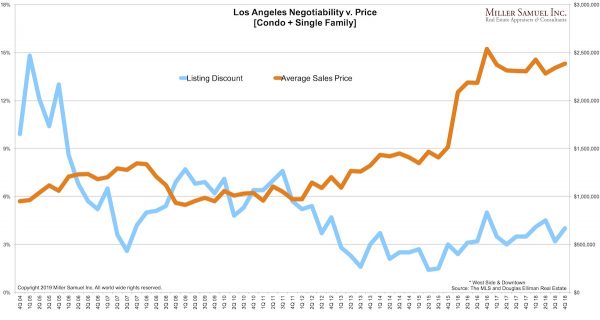 This Week in Aspirational Pricing: $238 Million Buys You A Home

All heck broke loose yesterday when the Wall Street Journal broke the story that billionaire hedge funder Ken Griffin paid $238,000,000 for a 23,000 square foot multi-story penthouse at the top of 220 Central Park South. There was a bunch of interest in the story about the highest sale in U.S. history and it made for a lot of fun additional reading, a fantasy alternative to the stress of current headlines. 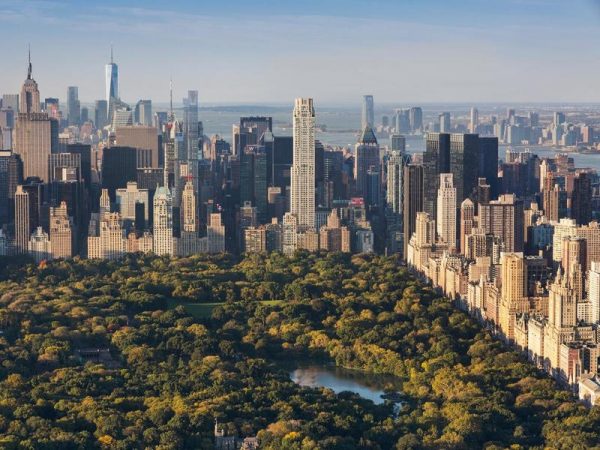 [Source: Not sure who to credit – found on web]

Some of the reads you should check out include:

The story that broke the news:

…the source of the epic “vertical travel” reference.

At $238 Million, It’s the Highest-Price Home in the Country [New York Times]

…That article by Stefanos Chen covers the idea that this sale has nothing to do with the current market. This was a sale representative of what I call “peak” luxury circa 2014 into 2015.

To give context to how disconnected from mere mortals this sales price was, Azi Paybarah who writes the New York Times newsletter New York Today made the context simple. He took all my data on the highest priced Manhattan residential sales for each year since 1982 and adjusted them for inflation: 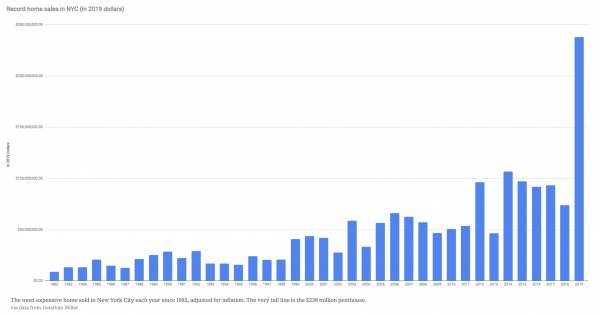 The visual context is quite jarring.

Here is my updated multicolored version (not cpi-adjusted) that my Housing Note readers have seen before. I had to move my company logo to the left to accommodate the line: 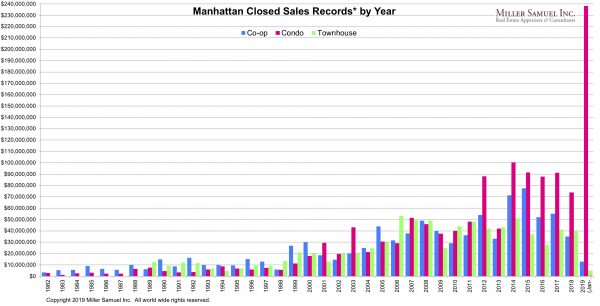 …This is a story that speaks to the price context of this sale.

An apartment on Central Park just sold for $238 million. That’s the highest price ever paid for a home in the US [CNN]

…This story mentions my hobby of tracking these big sales that began in late 2013 when I saw so many listings over $100 million appear (and few ever sold).

The $238 Million Penthouse, and the Hedge Fund Billionaire Who May Rarely Live There [New York Times]

…This was today’s New York Times cover on Ken Griffin.

As mentioned above in the Bloomberg article, a “vertical travel” is something New Yorkers do every day – I’ve just never heard it described that way (bold is my emphasis).

Citadel has signed a lease to anchor a skyscraper at 425 Park Avenue, eight-tenths of a mile from Griffin’s new apartment, not including vertical travel.

When Ken Griffin travels from his new penthouse to his office, I imagine his commute, that includes “vertical travel,” looks like this: 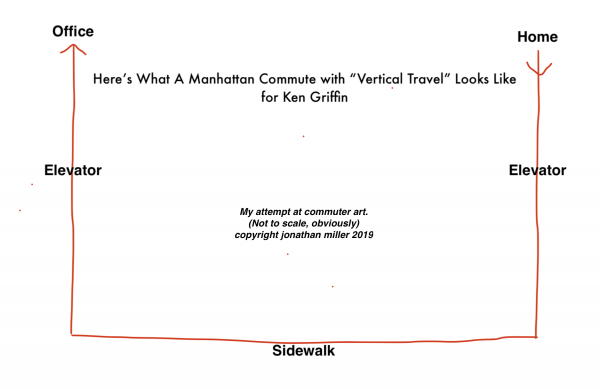 The Value of Land Across The U.S.

The value of land, or “dirt” as New York City real estate developers call it, varies wildly accross the U.S. A research paper explores this. Price moved higher faster than the suburbs which is why I think so many super luxury towers were built in Urban markets – that’s the only way to make the acquisition feasible (because landowners saw their value potential that way. 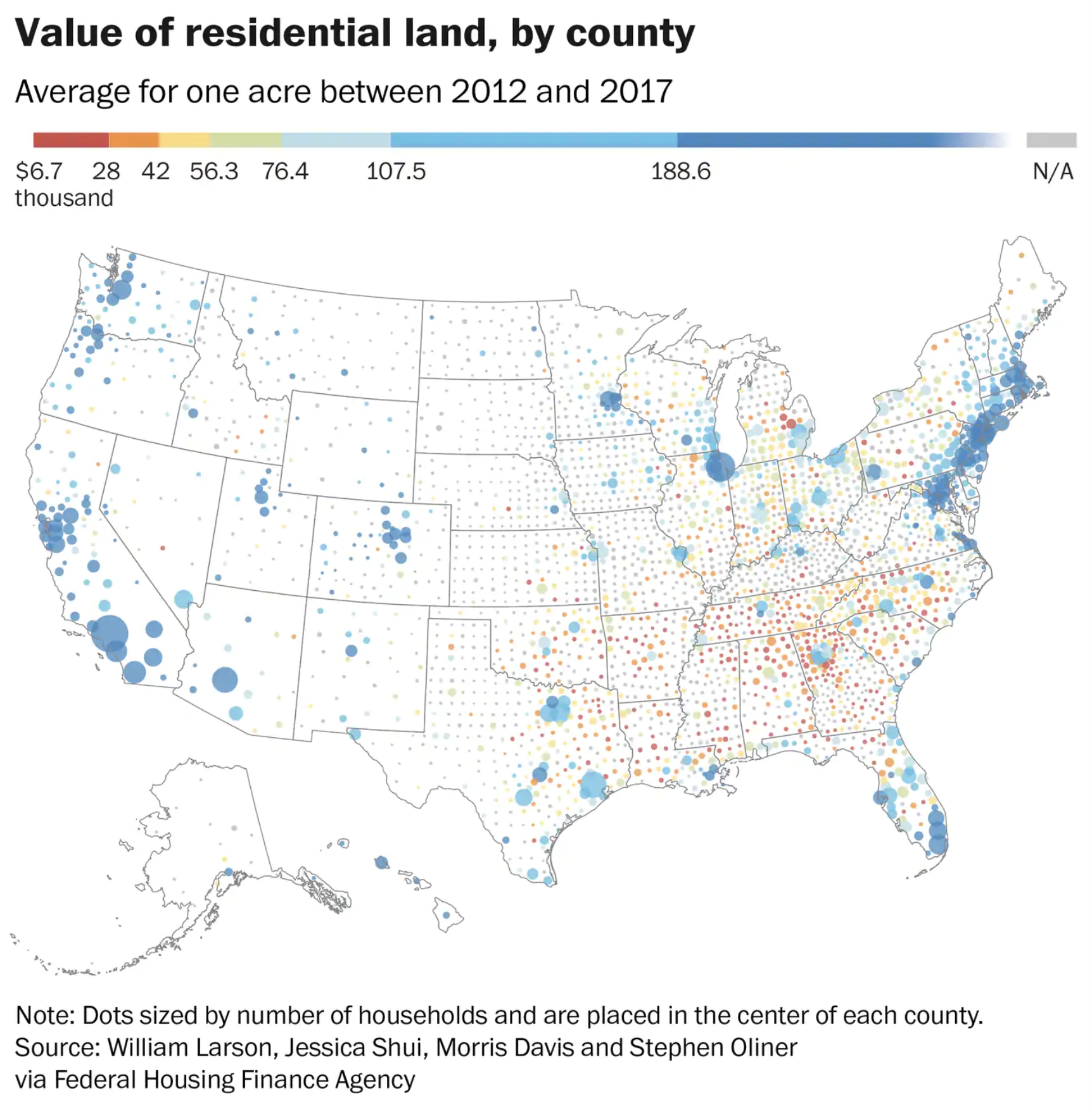 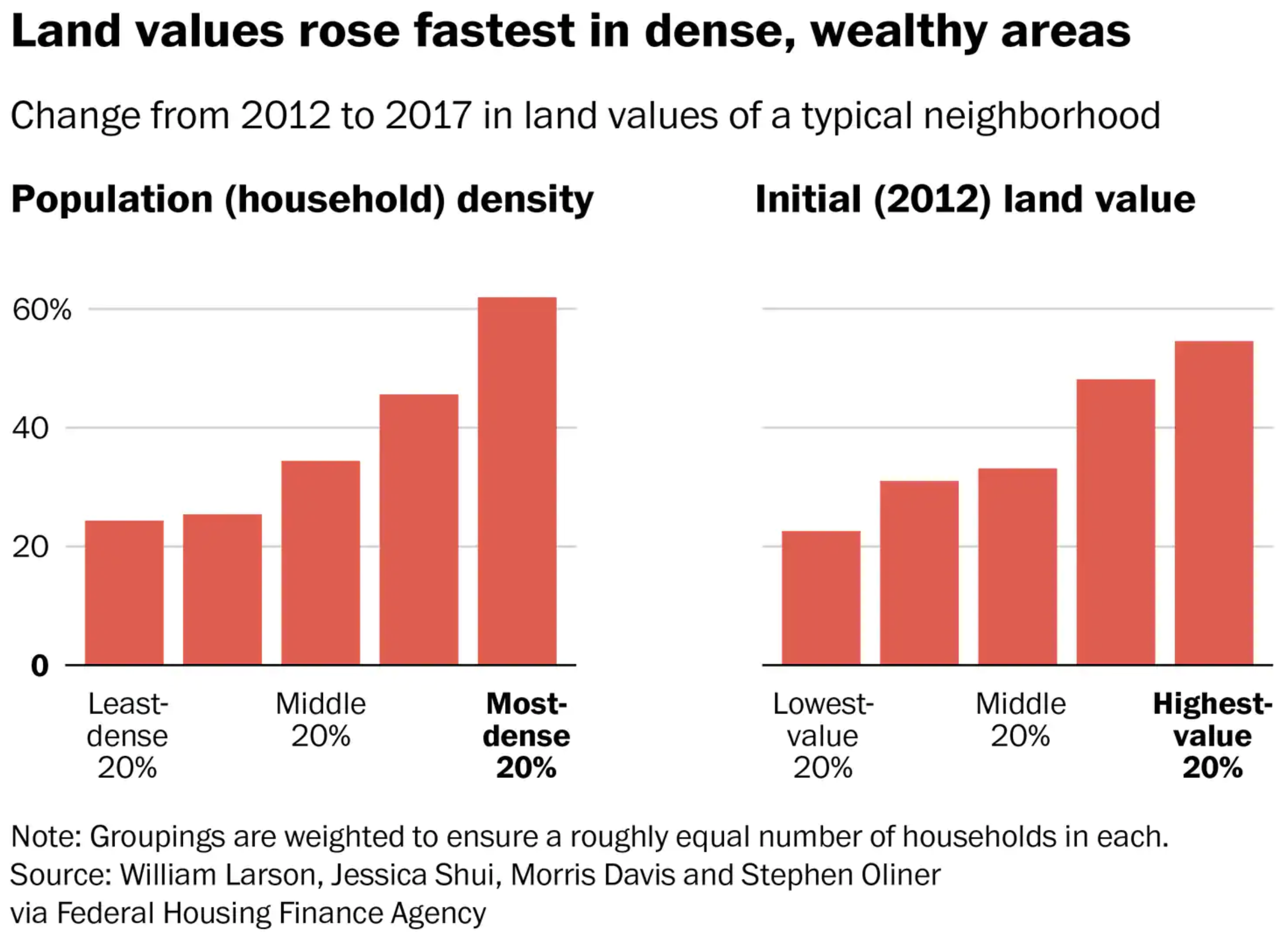 …but I have questions:

First: From a valuation perspective, homes depreciate and land appreciates so this is somewhat confusing:

“Generally, land tends to appreciate faster than structures because when housing demand changes, you can build more structures but you can’t build more land,” Larson said.

Second: How is New York County (Manhattan) not in the top ten? Manhattan doesn’t appear in the data yet Brooklyn does. Housing prices in Manhattan are higher than Brooklyn if locations are similar. This omission seems to jump out and I can’t find a disclaimer or reference to it in the piece.

The Only Housing Collapse Is The Collapse of Context

“Don’t believe the narratives of a housing collapse,” economist Michelle Meyer wrote in a note to clients on Tuesday. Meyer said the challenges facing the sector “should only be a slight drag on growth” and that “the recent decline in mortgage rates is well timed, ahead of the spring selling season.”

On the national market, existing and new home sales are falling year over year and prices are rising. Inventory is rising but still remains inadequate in many areas. Are pundits suggesting this declining condition will lead to a collapse? Is anyone saying this? Does anyone suggest we are seeing another housing meltdown?

No. What we are seeing is a housing slowdown brought on without the help of fast and loose credit policies (yet) distorting supply and demand. Slowing sales may eventually lead to declining prices. This is supply and demand and affordability in action.

This is a smart housing economist simply being adept at hyping her research notes. Let’s not get crazy here. 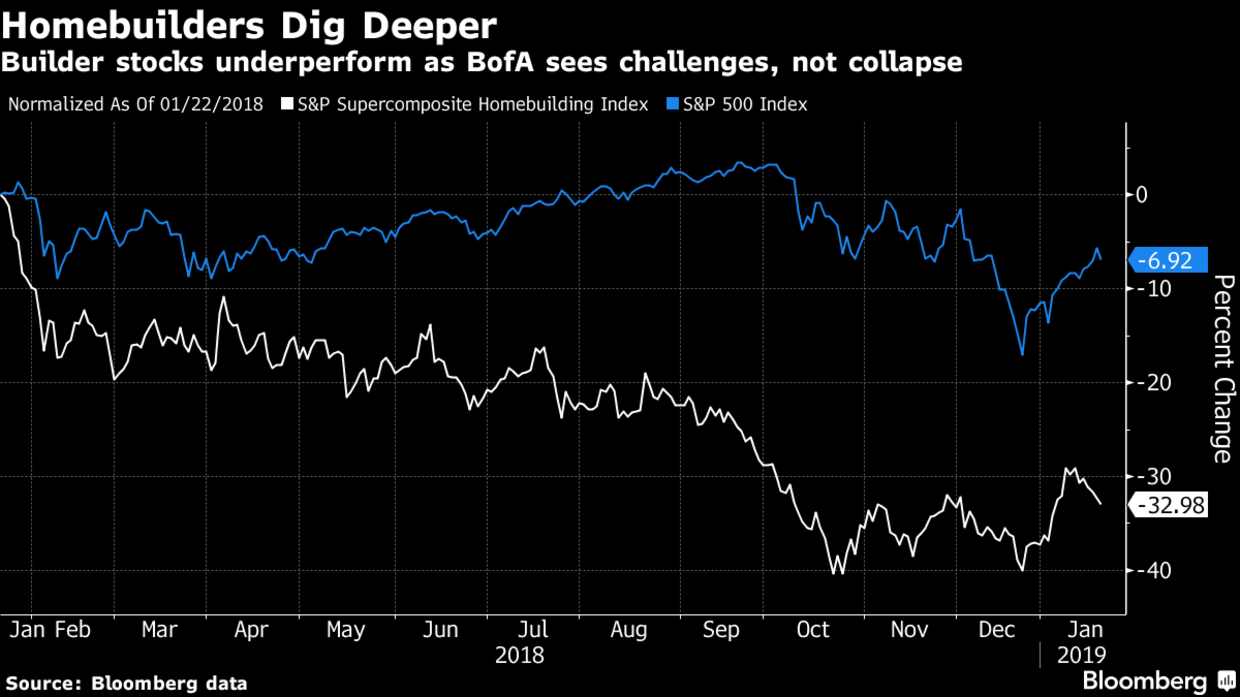 Real estate brokers are trying to figure out why sales of existing homes plunged in December.

If you notice on the NAR data release, the number of sales fell 11.7% YOY WITHOUT SEASONAL ADJUSTMENTS. In other words, the number of sales was almost 12% lower than the same period last year in their raw form. We are seeing this in nearly all of our regional research coverage. I contend the uncertainty of regulatory policy (tariffs) and the new federal tax law, as well as higher mortgage rates earlier in the year (and possibly late year financial market volatility) caused many buyers to pause on their decisions.

Here’s an FHFA/AEI research paper that mined data from more than 16 million appraisals. There seems to be a lot of mining going on these days to fuel research and more profits. The appraiser’s role is being phased out at the same time. I presented the Washington Post piece earlier in these Housing Notes.

Hat tip to the padre.