The incredible photos of Pluto from the New Horizons Spacecraft have been an absolute nirvana for Star Wars nerds (a Venn diagram to prevent confusion with geeks – i.e. my team)

Another picture of Pluto has been released pic.twitter.com/JNWCjpmprP

Something so far away named by an 11-year-old is now here in vivid detail..Pluto.

“I would say … our economy is in a much better state. Low interest rates have facilitated it, and a decision on our part to raise rates will say, ‘No, the economy doesn’t stink.’ We’re close to where we want to be, and we now think the economy can not only tolerate but needs higher rates.”

The use of the phrase “doesn’t stink” by a Fed Chair is amazingly refreshing. Yet what makes the economy feels like it stinks to so many? The lack of wage growth. And to drive the point home, wage growth has been stagnant for a while and hasn’t looked so hot this year. Here’s another good read on the topic from The Economist: Why American wage growth is so lousy (sorry, registration)

The futures market projections for the federal funds rate, which influences mortgage rate trends are here (and seem optimistic): 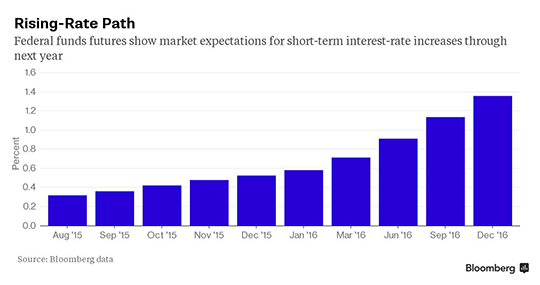 But I’m betting (not literally) on early-to-mid 2016 for a nominal rate hike, knowing that my methodology (I have none) stinks. And hopefully the rate hike will be for the right reasons, that the economy is truly better, that there is wage growth, improving household formation and fewer people are falling off the employment rolls. The Fed has promised to be data driven for their decision when the rate hike will occur.

But following the Fed to decide whether you should take out a mortgage stinks. There is a fantastic commonsensical article on this topic by Neil Irwin in the New York Time’s Upshot:

For most people, trying to parse the intentions of the Fed should play nearly no role in a decision of when to take out a mortgage or other loan. You should make your borrowing decisions based on current market rates and whether they make a given home purchase or refinancing decision affordable or not. Assume that neither you, nor your mortgage broker, nor your Uncle Ned, who watches a lot of Wall Street sharpies on CNBC, has any predictive capacity to know whether rates will be higher or lower a month from now.

And with rising housing prices (because of tight credit constraining supply) we’re even talking about raising jumbo mortgage limits in the not too distant future.

To that point, the housing economy is full of surveys, surveys and more surveys that are one step below a wild guess. The reliability of easy PR-driven housing surveys, for lack of a better word, stink. It’s not much better for economic models either.

One of my sons is a fireman. If he were called to put out a structure fire on a house like this, despite the disclaimers, he might notice a more discernible stink.

And while I’m on a role here…as it relates to the affordability crisis…do you know what else stinks? Malls. Only go to them when absolutely necessary. But malls could be making a comeback. One of the side affects of the overwhelming success of the new urbanism movement aka walkable cities has been rapidly rising prices in many cities. They are making the suburbs look a lot more affordable these days, and perhaps malls will be a beneficiary.

In case you missed it, Douglas Elliman published our research on the South Florida housing market for the second quarter. The general takeaway from the 5 markets: Miami Beach, Miami Mainland, Boca Raton, Fort Lauderdale and Palm Beach, was the shift in pace from frantic to brisk which is ultimately more sustainable. Inventory is a key variable and Palm Beach is the most constrained. Here’s a brief recap I wrote for Curbed Miami. Let me clarify. These markets don’t stink. 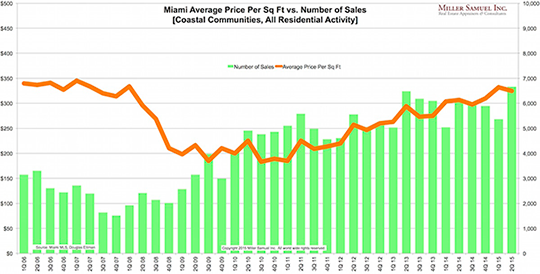 Before I run out of ways to incorporate “stink” into this note, I’d better end it now or this Housing Note will really stink. Incidentally, there’s no “stink” in space and should not be confused with being inside the spaceship.