Even though I’m writing this from my hotel room in Ohio, attending the first of four weddings in four months (3 in the Midwest and one in my Connecticut backyard), it’s not enough to stop me from writing my weekly Housing Note. Admittedly I am thankful to be writing this because I have nothing to do for the next several hours and its hot outside. For some reason, the word “wedding” aside from the happy stuff, conjures up thoughts of “cash” outlays, “cash” purchases, no “cash” in the bank, and so on.

Cash Buyers Use More Cash At The Top

Using the contract buyer stats from Douglas Elliman, New York City’s largest residential real estate company, as a proxy for the Manhattan housing market, I crunched something I always knew to be true but had never presented it empirically. This was done for a great New York Times article last weekend by Vivian Marino: Buy It With Cash, Mortgage It Later. 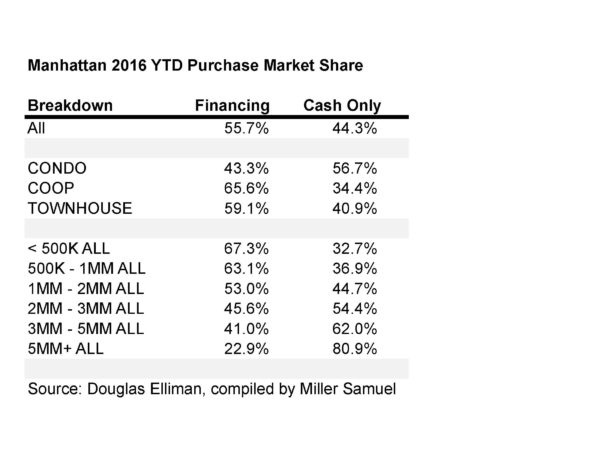 The U.S. Treasury action that was unleashed on the high end Manhattan condo market last year to snag cash buyers is being expanded. At the time, I was openly skeptical that this would have an adverse impact this market segment market, largely because the market had already tanked. Still, they have found a fair amount of questionable transactions. Louise Story of the New York Times continues to unravel this story that began with “Towers of Secrecy” over two years ago.

The expansion of the effort to identify and track the people behind shell companies, begun in March, means that there will now be increased scrutiny of luxury real estate purchases made in cash in all five boroughs of New York City, counties north of Miami, Los Angeles County, San Diego County, the three counties around San Francisco and the county that includes San Antonio.

More illicit activity is being pushed to the light now. You’re going to hear the word Kleptocracy a whole lot more in the future. According to The Real Deal:

The U.S. government moved to seize four high-priced condominiums in Manhattan, as well as a stake in the Park Lane Hotel, in connection with a money-laundering scheme that allegedly diverted $3.5 billion away from a Malaysian investment fund. The government’s effort to seize the entities offers a rare glimpse into how dirty money is moved into some of the city’s most expensive properties by a complex global network of shadowy characters, mysterious business entities and willing bankers and lawyers.

And speaking of the concept of Kleptocracy, here is a terrific Motley Fool podcast on:

The Business of Lying – Behavioral economist Dan Ariely, author of The Honest Truth about Dishonesty.

There has been much made of Chinese investors trying to extract money out and invest in real estate safe havens around the globe. A new method of wealth extraction as observed by Nomera Securities is to overpay for imported items (you thought I was going to say “dressing up in panda suits”). 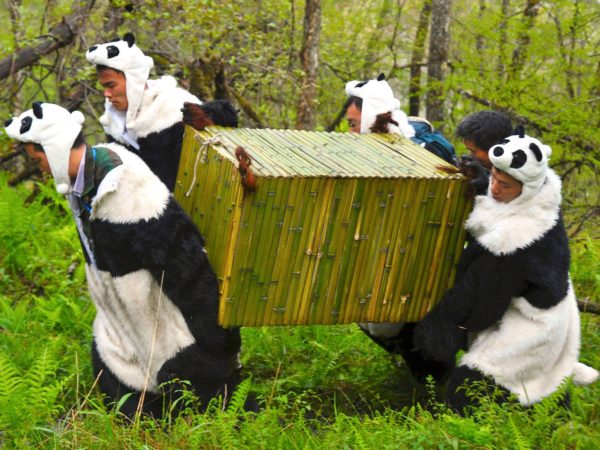 Vancouver Canada has been a hotbed of residential condo investment from Chinese buyers trying to extract their personal wealth out of the country (not necessarily in Panda suits). In response to the backlash of local residents and concerns about housing affordability, another province is considering a new tax on foreign purchases much like British Columbia did. Investors within countries with concerns about their government has caused widespread capital flight which causes local housing prices to skew higher, adding to the displacement of local residents, hence the tax to discourage or slow this phenomenon down. Cash-starved governments recognize the revenue opportunity here so I suspect use of this tax concept will expand. 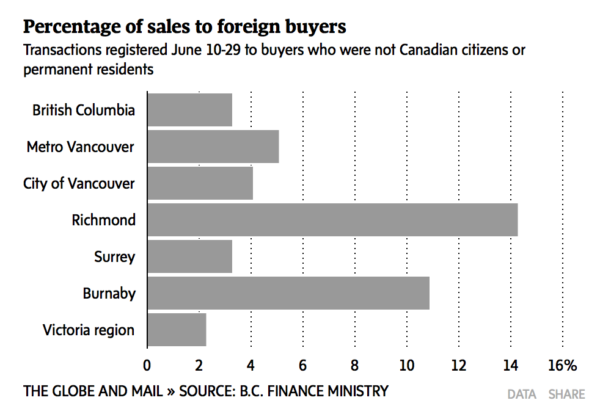 Whole Foods is coming to Harlem. Wow, that is a statement on gentrification if I ever heard one. There was a white paper written a while back that shows property values/rents rising whenever a Whole Foods moves into town (can’t find a good link). I’m always skeptical of this type of research because there are many inherent factors that may not be possible to quantify. To my NYC readers, its like looking at the average price of an apartment with a fireplace to those without – there are a lot of other reasons why that apartment with a fireplace sells for more aside from the fireplace itself. Zillow has also published a study mentioned in the NY Post article linked earlier:

In January, real estate listings site Zillow released a study finding that homes within a mile of an outpost of the posh chain appreciated an average of 4.5 percent more than properties outside this radius.

My kids call the chain “Whole Paycheck.” Never got the nerve up to buy one of these eggs and cook it. 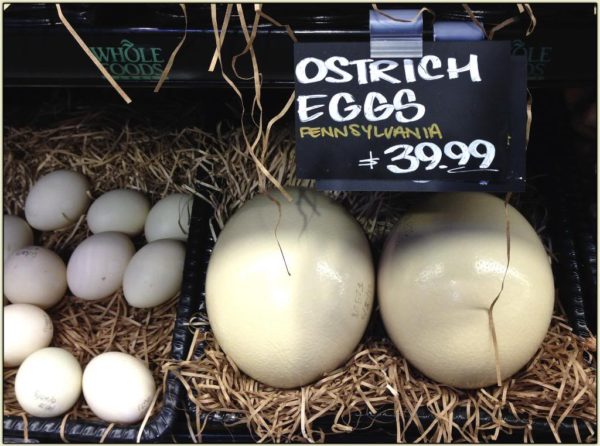 I had a fun discussion with Tom Keene and Mike Mckee on Bloomberg Radio this week. We are reading a lot about weakening rents nationwide, largely because of over building at the high end of the market – and how many REITs missed the signs. However in this conversation we delved into the urban-suburban affordability dynamic we are seeing first hand in NYC. Starts at a the 17:40 mark.

Real estate builder, converter and owner/operator Gerald Guterman speaks to graduate students of the Baker Program in Real Estate at Cornell University as part of their Distinguished Speaker Series. He addresses the issue of due diligence, or the lack thereof, in large scale real estate transactions. He lays out the case for the lack of due diligence in the largest real estate transaction in U.S. history, the sale of the massive Stuyvesant Town – Peter Cooper Village rental complex in Manhattan.

I was introduced to Gerry in 2010 and was a partner in one of his ventures. He has accomplished much during his career including construction projects such as the Cleveland Hopkins Airport in Cleveland, the United States Gold Depository at Fort Knox, the United States Military Academy at West Point and New York’s Roosevelt Island Development.

He is a loyal friend and thinks bigger than anyone I have ever met. One of things he taught me is that “you make your money on the day you buy, not the day you sell.” This advice was counter to most of the commercial real estate frenzy of the past 5 years, which was premised on the “hope” that the market will improve to make their investment a good decision. In my view this thinking was enabled by too much available capital chasing too little inventory – using other people’s money. He has told me many times that he is not in the business of “hopes and dreams” for his investors and partners.

Here is the 4 part presentation at Cornell. It is startlingly straightforward in his takedown of the Stuyvesant Town transaction. He also shares other thoughts on terms like “Cash-on-Cash” returns and “IRR” He is a compelling speaker and it is worth a listen.

I am a member of “RAC” aka Relocation Appraisers & Consultants who is holding its 2016 conference on September 15-16, 2016 at The Westin Stonebriar Hotel and Golf Club in Frisco, Texas. While my firm doesn’t do much relocation work these days and most RAC members do more complex residential assignments than relo, this organization is a group of what I believe are the best residential appraisers in the U.S. (They “claim” to have the best sense of humor but I have yet to see valid comps that support it.) I’ve been a member of this organization for about twenty years simply because I want to interact with the best professionals in my profession. In these days of AMC form-fillers, associating with the best is more important than ever.

Quicken’s Home Price Perception Index (HPPI) – I’ve spoken about their index before. Quicken is a firm that speaks a lot like it is 2006 again and are dependent on appraisal management companies (AMCs) for their mortgage appraisals. There was a recent Washington Post article that was reliant on Quicken’s HPPI which of course, generates monthly PR candy so their Chief Economist can say things like:

“Perception is everything,” said Quicken Loans Chief Economist Bob Walters. “That’s why it’s so important for homeowners to realize [that] how they perceive their home’s value could vary widely from how an appraiser views it.

But notice how rarely the appraiser’s opinion is more than the homeowners? 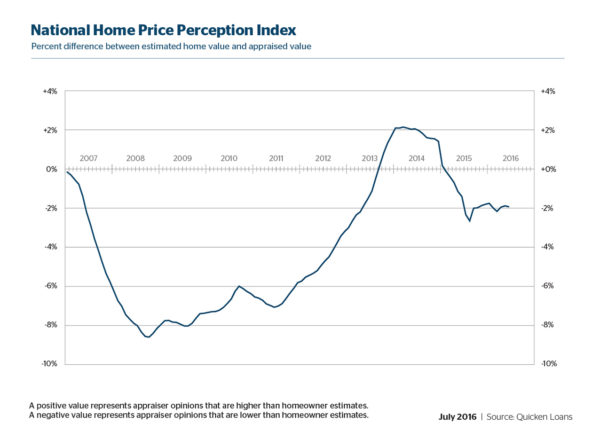 The problem with this monthly stream of public relations content is very basic:

If you need something rock solid in your life (particularly on Friday afternoons) and someone forwarded this to you, sign up here for these weekly Housing Notes. And be sure to share with a friend or colleague if you enjoy them. They’ll feel like going to a wedding, you’ll find some cash in that old pair of jeans and I’ll rekindle my freshman college nickname “Johnny Paycheck”.