On a personal note, my youngest son graduated from high school yesterday. For the past two decades I have adorned the end of our driveway with chalk notes on the first day of school and the last day of school. I would have started a few years earlier but we didn’t live in a house with a paved driveway until 1996. It started out as a way to make the day special for my four sons and inevitably it morphed into a tinge of embarrassment – but hey, a parent’s job is to annoy their kids and I did not wish to let them down. During a few downpours I made the message out of duct tape. Plus I didn’t take art in high school so I needed to catch up. And now this amazing period of my life has come to an end, and a new one begins. But this time I’m using a Sharpie.

Podcasts Related and Not Related to Housing

If you’re familiar with Moby [1] – he went to my sons’ high school. He was recently interviewed for a podcast with Ezra Klein on VOX [2]. It caught my attention because he spoke of the availability of cheap NYC housing during the 1980s and how that enabled many artists to thrive. I’ve always viewed artists as the “canary in the coal mine” for the next “hip” neighborhood and it makes you wonder if NYC has run out of canaries (think Hoboken).

And while I’m at it, I’d like to recommend 3 other great podcasts to listen to this weekend. I spend most of my waking hours with a podcast on in background. I love the medium. In fact I had my own podcast called The Housing Helix from 2009-2012 with something like 160 episodes. Unfortunately my podcast site was hacked so I merged it into my Matrix blog but still need to fix a bunch of the links. I’m threatening to start it up again. Here are some good listens for this week.

Bloomberg Odd Lots: The Amateur Activists Who Took own the Foreclosure Machine

The Way I Heard It With Mike Rowe: Fred’s Final Wish 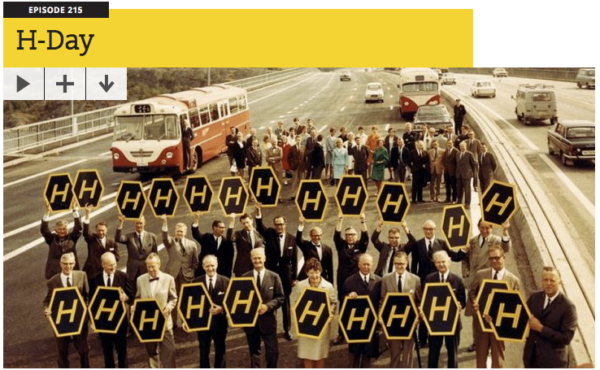 This week there was more discussion about last year’s $250 million sale at 220 Central Park South in Manhattan [4]. But seriously, is a quarter of a trillion dollars too much to pay for a single residence? Is this some sort of global record? Nope. There was a $270 million sale in Hong Kong [5] and both are still below the $301 million sale in Paris [6] that closed at the end of 2015.

Despite the oversupply of super luxury condos in New York City, we have seen a mini-surge of high end contracts [7] in recent weeks, almost as if there was pent-up demand in recent months that was finally released [8].

There is now a plan to convert 1,000 rooms at The Waldorf Astoria [9], which was acquired at the 2014 peak. I’m not sure how many apartments the 1,000 rooms will translate into, but the timing doesn’t appear to be so great.

And we are seeing countries around the globe restricting the purchases of properties by non-residents [10].

And remember that billionaires can also make lousy neighbors [11].

Forget the city. The suburbs are doing the bidding (wars).

There was a great NY Times cover story this coming weekend “Bidding Wars in the Suburbs. [12]” With the city’s housing affordability pushed beyond the max, the suburbs are erupting. As our attention has been cast towards the city over the past 5 years, city renters and home buyers are looking to the suburbs and it’s making a mess of those quiet towns. Bidding wars have expanded yet the high end remains soft. Here’s something I said for the piece (I love self quoting – it’s like an athlete talking in third person to a reporter after winning the game).

“The city is this pot of water that’s spilling over on the sides, and that excess demand is going to the suburbs,” said Jonathan Miller, the president of Miller Samuel, a New York appraisal and research firm. “It’s all being driven by the lack of affordability.”

Here’s a sampling of some of the towns. Westchester is clearly the tightest although Long Island was earlier in the cycle. 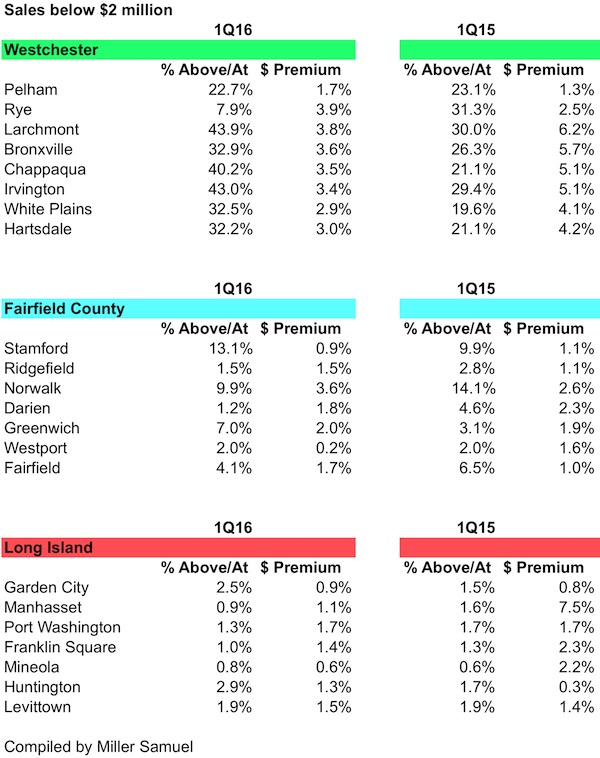 CNBC did a nice piece on the push and pull between gentrification and rising rents [14] in the city using our Douglas Elliman report [15].

There is a pretty interesting thought piece by Victor Lund of WAV Group – Backed by Google, Zillow Set to Become Online Brokerage [16]. He makes the point that Zillow, with Google’s backing, could become a giant online real estate broker. Since Zillow gets its listing content from real estate brokers, they would use their Zillow Pro agents for listings and compete with the rest of the world. The motivation here is that Zillow has peaked in their advertising play and needs another source of revenue, especially now that Move finally became a threat after being acquired by News Corp.

Appraisals Are Not Wanted by Banks

There is a certain irony here. To the less informed – and there are many – appraisals are stereotyped as backward looking…that we only look at closed sales that sold months ago to arrive at the current market. This is a silly notion. Appraisers (I mean real appraisers, not AMC form fillers), look at many other things besides “closed” sales. My friend and regular but unwitting content provider Ryan Lundquist talks about other signs he looks at [17]. This is why appraisers hired by lenders need to be experts in their local markets, otherwise they are just form-fillers.

The banking industry, with a powerful lobby and lots of money to sway legislators and regulators that my industry does not have, are championing the elimination of appraisals in 90% or mortgage applications [18]. After all, they still see the cost of an appraisal as a terrible thing since history has shown that when things go bad, the federal government will step in and provide a backstop.

Appraisers have limited representation. Our biggest industry leader – Appraisal Institute – has lost its way, as has the ongoing creator of appraisal rules – The Appraisal Foundation are together mired in a feud. So two other trade groups have stepped up to warn the industry of this impending catastrophe.

Imagine using a Zestimate as the basis of a lending decision?

According to a person familiar with the issue who would not speak for the record, the regulatory agencies, largely at the behest of smaller community banks, want to allow for cheaper and less time-consuming valuations, such as those made by a real estate agent, or a Zillow Zestimate, to suffice for certain types of federally backed loans.

As described by the two organizations in a press release, the changes “would exempt over 90% of appraisals performed in connection with residential mortgage transactions from all of Title XI’s requirements including, most critically, those related to enforcement In cases where an appraiser failed to competently perform the assignment or otherwise violated the Uniform Standards of Professional Appraisal Practice (USPAP) or appraiser independence requirements.”

This is what teamwork looks like when you are saving a life – hopefully appraisal industry leaders will take note.

Punctuation and spelling is overrated

I have long been referred to as the “King of Commas” for my obsession with inserting them unnecessarily. There was a great piece in the Washington Post [19] about punctuation, namely periods. I now look at my text messages to my kids differently and wonder if this is why they don’t reply immediately. Of course deficiency pales in comparison to my ability to spell, as Housing Notes readers are familiar with my horrific grammar. But this is a bridge too far [20].

I’m running at full steam now with my weekly Three Cents Worth column for Curbed that I’ve been writing on and off for about 11 years. I explain the following charts in my post In the Battle For Space In NYC Apartments, Condos Trump Co-ops [21]. Here are the charts in question.

Nobody cares about interest rates

For the past 18 months, the Fed has been fretting about the right time to raise mortgage rates. It misfired last December when they increased rates and the market drove them even lower. There has been an incredible amount of discussion on when they will increase and how many times they will rise this year. Yet mortgage rates have fallen to a 3-year low [24]. Now the future of rate increases looks less obvious [25]. And mortgage credit is getting tighter [26]. And Nobel laureate Robert Shiller tells us we are way too concerned about being priced out of the housing market [27].

A fave twitter follow of mine Josh Brown characterizes the Fed’s new outlook more accurately than the Fed did:

If you need something rock solid in your life (particularly on Friday afternoons), sign up for my Housing Note here [31]. And be sure to share with a friend or colleague. They’ll feel better than a good 30 year fixed rate, you’ll feel better about that bidding war and I’ll break out more sidewalk chalk.