Be Sure to BREXIT Any Thoughts of Rising Mortgage Rates

I did a lot of reading this week, plus we proudly attended my youngest son’s high school graduation and his college orientation. As a tradition, my wife gives each of our sons a copy of Dr. Seuss’ “Oh, The Places You’ll Go” on their graduation day. Of course plenty of eye-rolling ensues. And there are other ways to interpret this book.

For some reason I read a lot of music related stuff but all along I paid short shift to the Brexit actually happening – I just didn’t think it would. I was wrong or just too lazy to think of the housing or economic repercussions. So this week’s Housing Note was a mad dash to the finish line on Friday morning after the overnight results came in. I pushed a bunch of what I planned to cover to next week. The Brexit is our new reality.

For loyal readers of Housing Notes, you’ll remember this tweet as homage to the topic of a prior post on Boaty McBoatface:

I feel like if the Brexit people had called it Leavey McLeaveface, this vote wouldn't even be close.That's how much people love that meme.

The biggest news of the week: a court found that Stairway to Heaven wasn’t plagiarized. That might have had bigger repercussions to the zeitgeist than the the Brexit, no? And imagine if the song was called “Hairway to Steven?”

The Brexit Actually Happened. Now What Happens To U.S. Housing?

Great Britain voted to leave the European Union last night and their Prime Minister resigned as a champion of the #remain campaign. The Brexit is one of those global events we’ll be talking about for generations to come.

What does Brexit mean to the U.S. housing market?

Here are some first impressions, even though I don’t think anyone really knows the extent of the global impact yet.

Low interest rates will remain in place, probably for years, keeping credit conditions for bank mortgage lenders tight. The Federal Reserve has been working hard to change the market psychology in order to normalize mortgage rates and spur more economic growth with normalized lending conditions. It hasn’t worked as planned. The Fed has reduced forward guidance for future rate increases already and I think this event prevents such an increase for a number of years. Economic conditions don’t seem to be hurting the existing home sale market which showed the most U.S. home sales since 2007.

New York City will crush London as the world’s financial capital. Ok, thats an exaggeration, but it should give NYC further competitive advantages in the financial sector which could translate to jobs and profits. A number of years ago I attended a friendly debate at Columbia University between then NYC mayor Mike Bloomberg and then London mayor Boris Johnson (who attended Columbia). There was no winner in the debate then (although it was enormously entertaining), but there is a winner now: New York City.

The USD is now even stronger against the GBP. It is more expensive for the Brits to purchase NYC housing than it was yesterday. With about 15% of their economy connected to the EU, I suspect it will be a number of years to untie the connection, providing a continual drag on their economy. It is not realistic to think that UK investors will surge towards New York City tomorrow. It is now more expensive for them and many may have less disposable income on hand in the short term as the economy weakens.

Super Luxury housing in NYC may see tiny upside. I do think there is some benefit to the super luxury segment in NYC since London as a competitor is probably off the table for many global investors. New York super luxury remains challenged by over supply – with more supply coming – but its still a better outlook for the NYC market, if only a a nominal amount. 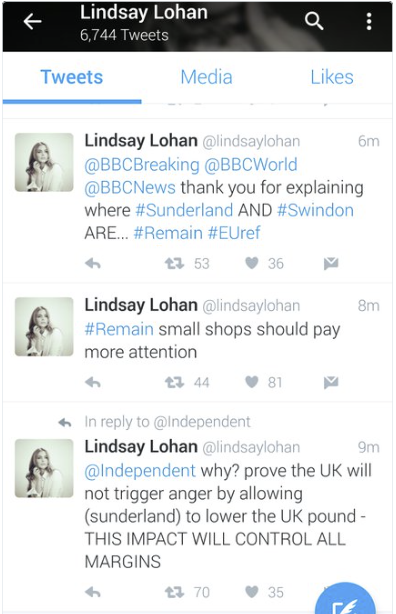 Over the past few years, the narrative about foreign buyers of real estate has been at full volume. Vancouver has continued to see a tremendous amount of Chinese buyers of real estate. In fact 90% of sales in that market are in excess of $1 million. In Manhattan, that number was (only) 53.8% in the first quarter of 2016.

But with the heavy volume of speculative investment world wide, many governments are beginning to push back, perhaps out of concern that such activity is making housing costs more expensive for locals. I linked out to this Mansion Global article last week on times getting tougher for foreign buyers but it is worth revisiting now. In the case of Vancouver, if the province, British Columbia, doesn’t act, the city is proposing a tax on empty or under utilized homes.

And it appears that talk of a Canadian housing bubble is back. The Bank of Canada issued a review of the financial system with some significant regional concerns. British Columbia and Ontario post the highest risk due to a sharp rise in housing prices and an increased use of leverage. 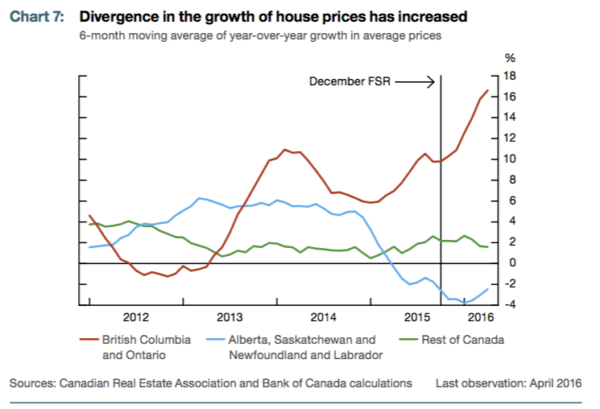 And now with the Cavs win over the Warriors a few days ago a distant memory with the Brexit news, here’s the Russian’s take on LeBron’s #TheBlock

In the past month I’ve returned to writing my Three Cents Worth column again on Curbed I seem to be obsessed with the mix of what is selling. This week I looked back over the past 5 years to show how housing prices have risen much more in lower priced markets than the upper priced markets. Here’s the chart:

The banks have won and the appraisal industry has lost. At least for now.

Here is a series of feedback from Rob Chrisman in his must read newsletter on the mortgage industry. It is a heavily read source of in-the-trenches mortgage insights that I subscribe to. He gave me permission to share his recent content on the appraisal industry and will share more of it in the coming weeks. I inserted my thoughts following each quote:

And appraisals are always a hot topic. I received this note from an originator. “Our appraisal environment is out of control. Appraisals we used to get in 1-2 weeks have quickly gone to 3-4 weeks. Appraisals that were just $400 are now $550 and sometimes up to $1,100 for FHA and conventional appraisals. With the rules regulating appraisers on how to become an appraiser and how appraisers have to monitor everything an apprentice appraiser does, it is causing our homebuyers hardship. With the appraiser’s current workloads and the amount of appraisers we have lost in recent years, there is no motivation to bring apprentices on (due to those regulations), leaving the current appraisers working night and day to keep up with their workloads. That is also causing them to keep moving up the appraisal fees (basically rush fees to keep pushing who can pay the most up the line).

It’s called “market forces” and because the AMC movement has gutted the industry, there are much fewer competent appraisers left. And please lay off the “hardship” angle. It’s tired and worn out. Mortgage rates are at historic lows and with the Brexit they will likely stay that way for a while. As I have said before, there is not a shortage of appraisers, there is a shortage of appraisers willing to work for half the market rate.

“I don’t say this to be negative against the appraisers; they are doing what they can to keep up but we are left with $700 appraisal fees for our 1st time homebuyers on top of the other closing fees that are steadily climbing. Something has to be done. Either make becoming an appraiser a stringent faster process or make it where current appraisers can bring people on to help without having to monitor every process. Any thoughts?”

If you keep thinking of appraisals as a commodity rather than a profession and this will continue as the industry is gutted.

And this one. “The appraisers in my area are so buried, with turn times of 1+ months, they rarely consider training a new appraiser and eventual competitor. Are there ways we can start any program in our area to begin to train new appraisers without their help? Most real estate agents don’t care that LOs are struggling with this issue – they just want their transactions closed in a timely manner and rightly so. Borrowers, especially 1st time homebuyers, are struggling with the increasing appraisal costs. There should be discussion with Fannie Mae and Freddie Mac regarding going back to more appraisal waiver options from DU & LP approvals. We used to have more of those (800 credit score borrowers, 40% equity loan to values, rate/term non cash out refinances where we could get an exterior appraisal or even an appraisal waiver to get the loan completed) but now most automated approvals are requiring full interior/exterior appraisals. That is also burdening the system and the appraisers.”

With AMCs taking half the fee for appraisals, we can no longer mentor and train new appraisers. Established and reputable firms are going under and loan officers wonder why turnaround times in some markets are so slow. Look at the cause, not the effect.

The appraisal situation isn’t simple since a) nearly every home loan requires one, and b) the supply and demand of appraisals and appraisers is off-kilter in many areas of the U.S. I asked Michael Simmons, SVP of Axis AMC, a nationwide company. “Your reader raises several timely questions. Has the cost of appraisals risen? Yes, they have. Have the number of appraisers declined in the last 5-10 years? Again, yes they have. Have the rules governing the qualifications for becoming an appraiser changed? Not really – unless you count needing a 4-year college degree now to even be eligible to work toward certification – but then that’s part of the problem; we haven’t adapted qualifying criteria to the times.

As Warren Buffet famously said “Never ask a barber if you need a haircut.” The decline in appraisers is due to the influx of AMCs taking half of their fees. It’s an economics principle commonly known as “supply and demand” and since AMCs do not bring any “value add” to the appraisal process, the extra fees being charged are not bringing in more expertise.

This isn’t communism or socialism. The banking industry has promoted the AMC system to cut costs. They forgot about the part where appraisers have to make a living and are not widgets on an assembly line. Appraisal fees cannot be pigeon-holded into a flat fee across the U.S. Does it cost me, an appraiser in Manhattan, New York, the same as someone operating in Manhattan, Kansas? 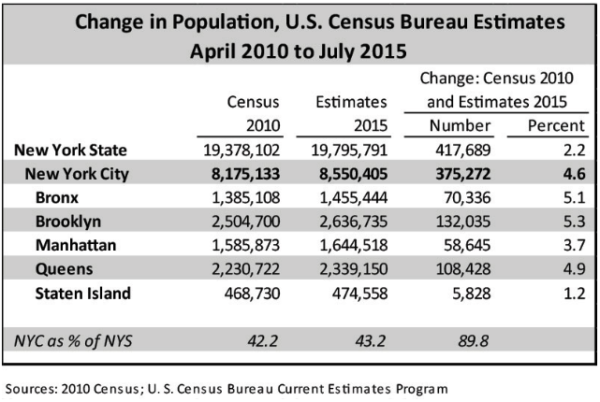 If you need something rock solid in your life (particularly on Friday afternoons), sign up for my Housing Note here. And be sure to share with a friend or colleague. They’ll feel like Brexit, you’ll feel bigger than LeBron’s Block and I’ll channel my inner Leavey McLeaveface.