Bowling For Answers In The Housing Market

This is a wonderful 87 seconds well spent – be sure to have your audio on – took 10 tries to get it right.

I’ve been the author of the expanding Elliman Report series since 1994 and this week, Douglas Elliman published our research on the Manhattan, Brooklyn & Queens rental market for February 2021. The surge in new leasing activity continued as falling prices continued to generate more demand, either from inbound or musical chairs.

Wall Street apparent was happy about it making the Bloomberg coverage the 8th most read story on the ±350K Bloomberg Terminals by midday.

And of course, a chart that shows how Manhattan rental activity has really inverted: 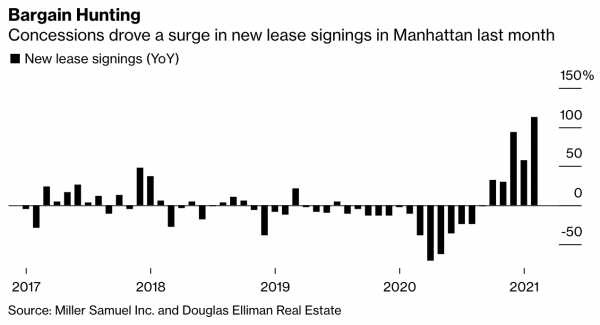 “New lease signings surged to their highest total for a February since the financial crisis.” 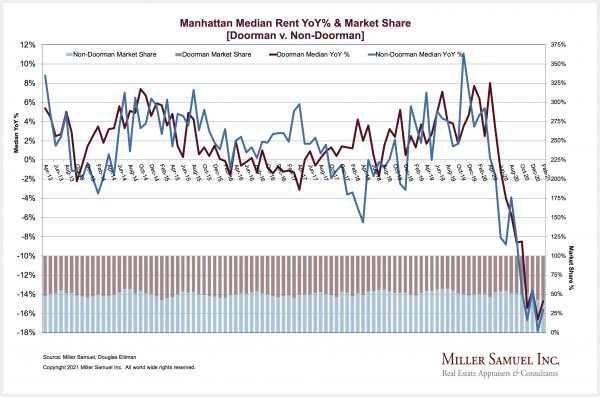 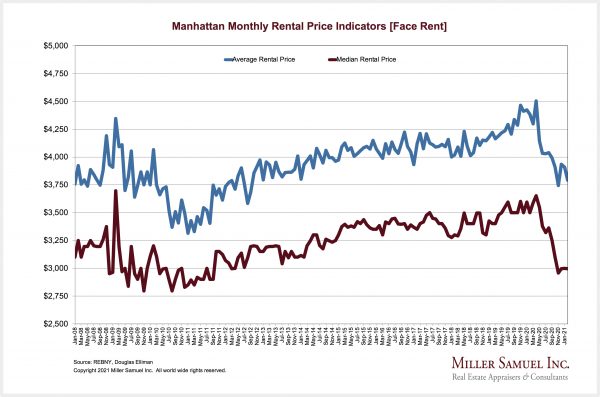 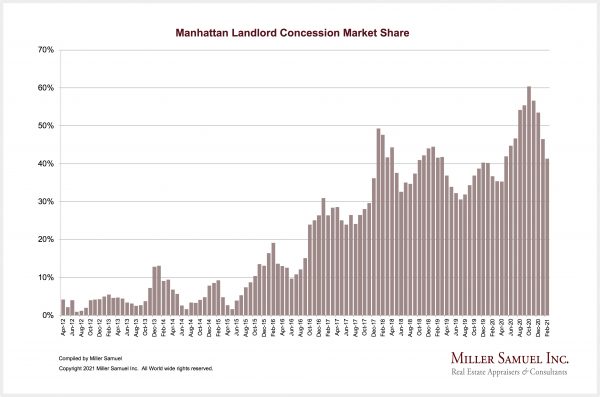 “Highest number of new lease signings since tracking began during the financial crisis.” 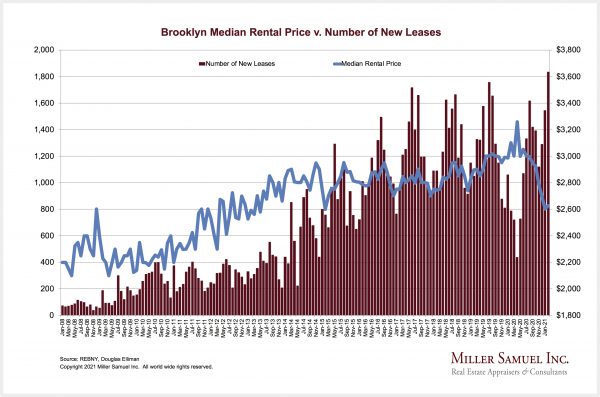 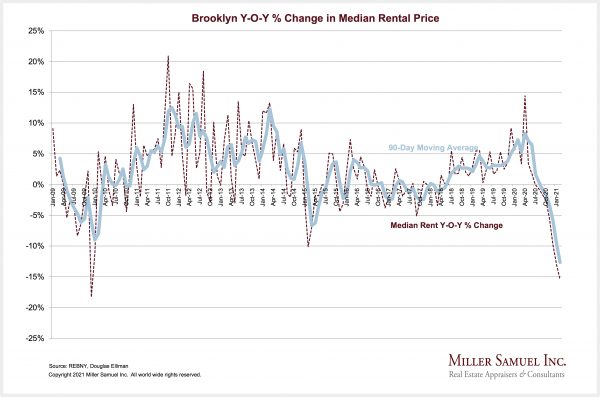 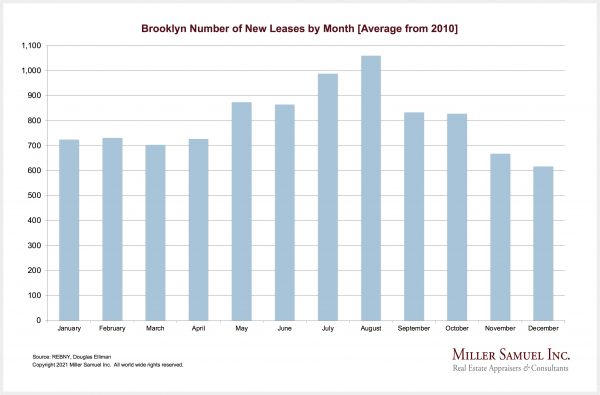 [Northwest Region]
“New lease signings surged to their highest total for a February in nine years of tracking.” 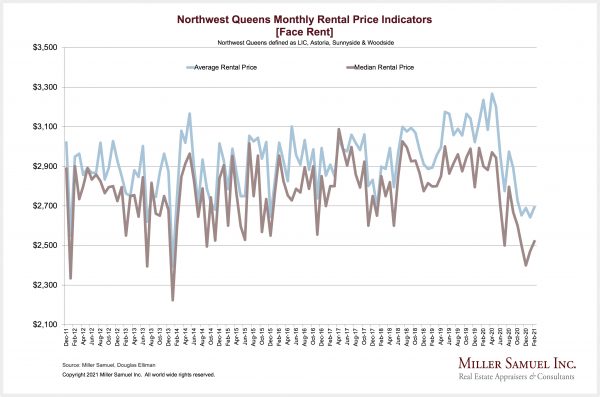 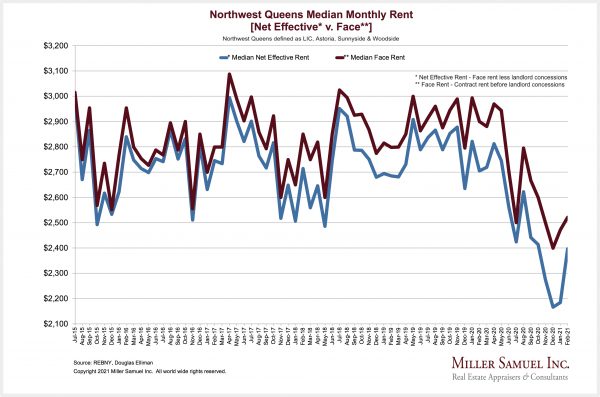 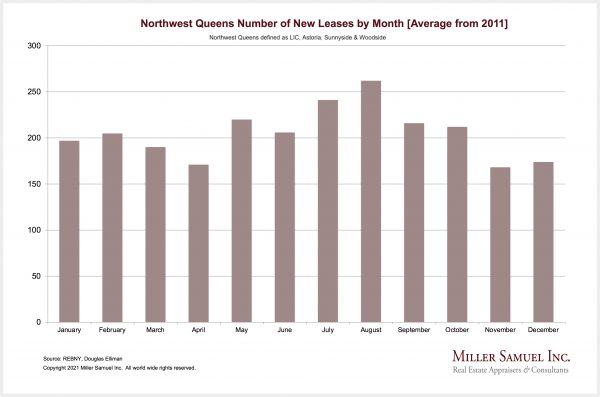 Up until recently, the headlines suggest that 100% of Manhattan residents are moving to Florida and by the end of the year there will be about 9 people left. While there clearly has been a substantial inbound migration to Florida fueled by the federal SALT, a series of New York State taxes that target the wealthier end of the housing market, COVID and Zoom, the discussion has been largely one-sided.

The first shot off the bow was taken by Bloomberg based in New York: Wall Street A-Listers Fled to Florida. Many Now Eye a Return:

“The main problem with moving to Florida is that you have to live in Florida,” said Jason Mudrick, who oversees $3 billion at Mudrick Capital Management and has resided in Manhattan for more than two decades.

Ouch. And of course, the New York Post piled on – Wall Street elites who fled to Florida amid COVID-19 want to return to NYC

The Miami Herald approached me for a counter-punch article (hey, I live in NYC metro but I’m neutral) that concluded the opposite of Bloomberg: Apples vs oranges: Some New Yorkers reportedly having second thoughts about moving to Florida

Note the Miami Herald title cleverly includes…’Apples versus Oranges’…get it?

Almost any way you slice it, whatever sizzle may be fizzling is minuscule.

I’m sure there will be more regional headline wars in the future on this topic.

Homebuyers Are Heading to Florida During Covid, but Nearly as Many Are Moving Out [Wall Street Journal]

Even though I was born in Boston, I don’t understand the layout logic here:

“My first reaction was, man, this thing was built for an exhibitionist,” says the realtor selling a Jamaica Plain home with a bathroom that’s basically just a toilet behind frosted glass — and no one knows why

One of the problems with systemic discrimination is that the perpetrators can be so embedded in their caves that they don’t even realize it. The USPAP Ethics Rule is worth focusing on right now, given the significant actions on a state level going on right now (see my New Jersey post down the page a bit).

In the Ethics Rule of USPAP under the CONDUCT section:

An appraiser must perform assignments with impartiality, objectivity, and independence, and without accommodation of personal interests.

The above is a long-standing, poorly worded item that now stands out as somewhat alarming. When I read this, it means to me:

IF I can present SUPPORTED conclusions relating to characteristics such as race, color, religion, national origin, gender, marital status, familial status, age, receipt of public assistance income, handicap, etc., it is ethical for me to do so. Can you imagine what a sharp lawyer defending an appraiser can do with such a poorly worded phrase?

This points out the structural flaw in TAF: neither the technical boards; ASB members (and AQB members) should NOT be the authors of these edits to USPAP. The actual writers should be in-house policy wonks that know how to write clearly. Board members should be providing the guidance for these edits, neither authoring or wordsmithing them. This is one of the reasons USPAP has been written and re-written and re-written so much is that no one can get it right the first time despite nothing changing in the industry between edits.

This issue begs the question, like with the “misleading” definition controversy, is there a legal review on every single modification made to USPAP? I know TAF has counsel, but to my understanding, they are not embedded in the USPAP cycle review. Given the $8-$10 million in reserves as a non-profit, shouldn’t The Appraisal Foundation have a staff lawyer at all meetings and reviewing all output generated by all the TAF boards? I’m fairly sure they don’t have this process despite all their output to the 55 legislative bodies that embed USPAP into their laws?

I wonder if those legislators understand this?

Some thoughts on AO16 will be shared next week.

What is the actual reason USPAP was extended without warning for an additional year? Don’t get me wrong. I am all for longer USPAP cycles or doing updates on an as-needed basis in an industry that changes very little. As I’ve mentioned before, Dave Bunton of TAF said during the ASB public call on February 19th that USPAP was extended another year because of COVID – yet that makes no sense. Zoom calls are ubiquitous these days, so COVID is not a legitimate reason – we can argue that TAF is MORE efficient with Zoom. I bring this up specifically because there doesn’t seem to be any supporting research or rationale behind this industry-impacting decision as we anticipate the looming chaos on the state legislative level.

The Fourth Exposure Draft of Proposed Changes for the 2022-23 USPAP and Comments provides significant evidence that the desperation for TAF to team up with AI after their bat-shit crazy letter to ASC made their alliance with AI necessary.

The Appraisal Institute presented an excellent summary on the flawed USPAP cycle in a letter dated February 3rd, a little more than two weeks before the February 19th ASB public event.

This suggests that Dave easily and hypocritically rolled over in his newfound weakness after more than a decade of bashing the Appraisal Institute for this very point.

And let’s talking about ‘misleading’ a little more.

The ASB proposes deleting the definition of “Misleading”: The Appraisal Institute agrees with this proposed change, however, the Appraisal Institute believes that quicker action may be warranted. In a previous comment letter, the Appraisal Institute stated that: The rationale notes that “Stakeholders expressed concern that a simple typographical error in a report could be viewed as misleading under the current definition” and that “the appraiser’s responsibility to avoid errors of both commission (intent) and omission (errors) are clear”. The Appraisal Institute sees no reason why such a potentially harmful term should be allowed to continue on to the next edition of USPAP and suggests that the ASB issue an appendix or bulletin removing this term immediately. Timely action on this matter would serve to promote and maintain public trust in appraisal practice.

Bill A5185 and AMC Bill A5146 introduced to the state legislature in New Jersey show just how much state legislators don’t understand the appraisal profession. Valuation Legal warned us about this back in December: Appraiser and AMC Laws to Include Prohibitions Against Discrimination.

2. a. Prior to the initiation of a residential property appraisal, a holder of a license or certification under P.L.1991, c.68 (C.45:14F-1 et seq.) or registration under P.L.2017, c.72 (C.45:14F-27 et al.) shall provide a property seller with a document, in a form and manner prescribed by the board, informing the property seller of the opportunity to report, through the Division of Consumer Affairs’ website or telephone number, any suspicion of a discriminatory appraisal by the holder of a license, certification or registration on the basis of a property buyer or seller’s race, creed, color, or national origin.
b. Information concerning the prohibition of discriminatory appraisals of residential property, including the statutory basis for prohibition, shall be published on the Division of Consumer Affairs website.

I can appreciate the idea of reducing potential discrimination by an appraiser, but in the short term, this uninformed view is not the way and will make matters worse:

Do you see where this is going? This will not solve the problem the legislature is trying to resolve.

Why appraisers are especially vulnerable: