Don’t Stand Too Close To The Housing Market Eruption

Watching a volcanic eruption is like watching a waterfall, right?

People in Iceland are just casually hanging out on an active volcano pic.twitter.com/FRV2hts60h

Tangible Reasons Why The U.S. Housing Market Is Not In A Bubble

Many wonder if we are entering or already in a housing bubble with rapid housing price growth. I’ve maintained we are not because lending conditions remain tighter than historical normals (looking well before the GFC era)

Barry Ritholtz at The Big Picture post Is it a Bubble? GS Edition with this super interesting chart on famous financial bubbles as well as Ray Dalio’s checklist: 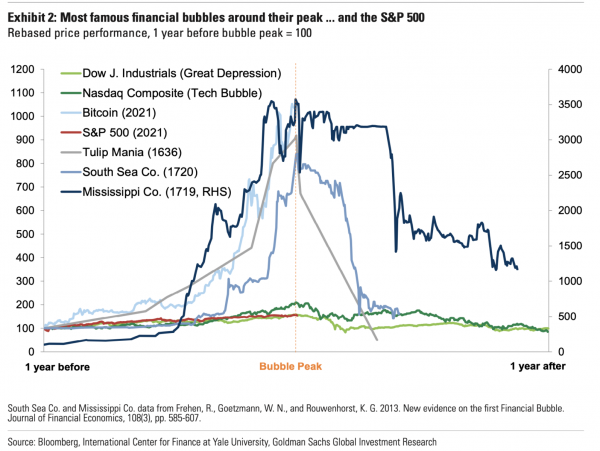 Item 5 below is what seems to be missing at the moment.

Felix Salmon over on his Axios Capital newsletter shows us why the Canadian housing is in a bubble, and the U.S. is probably not – U.S. home prices are rising faster than mortgage debt: 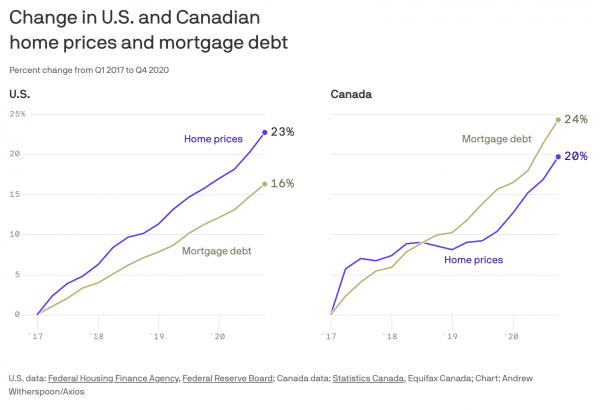 After me downplaying growing bubble talk, let’s talk about a 113% annualized rate of growth on a luxury flip in Palm Beach.

The casino magnate paid $18.4 million for the home at 235 Via Vizcaya in late December, property records show.

Palm Beach has been a hot-bed of high sales activity in a market defined by high end activity. 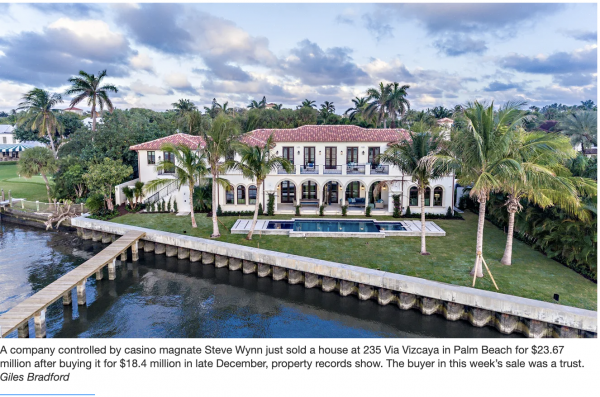 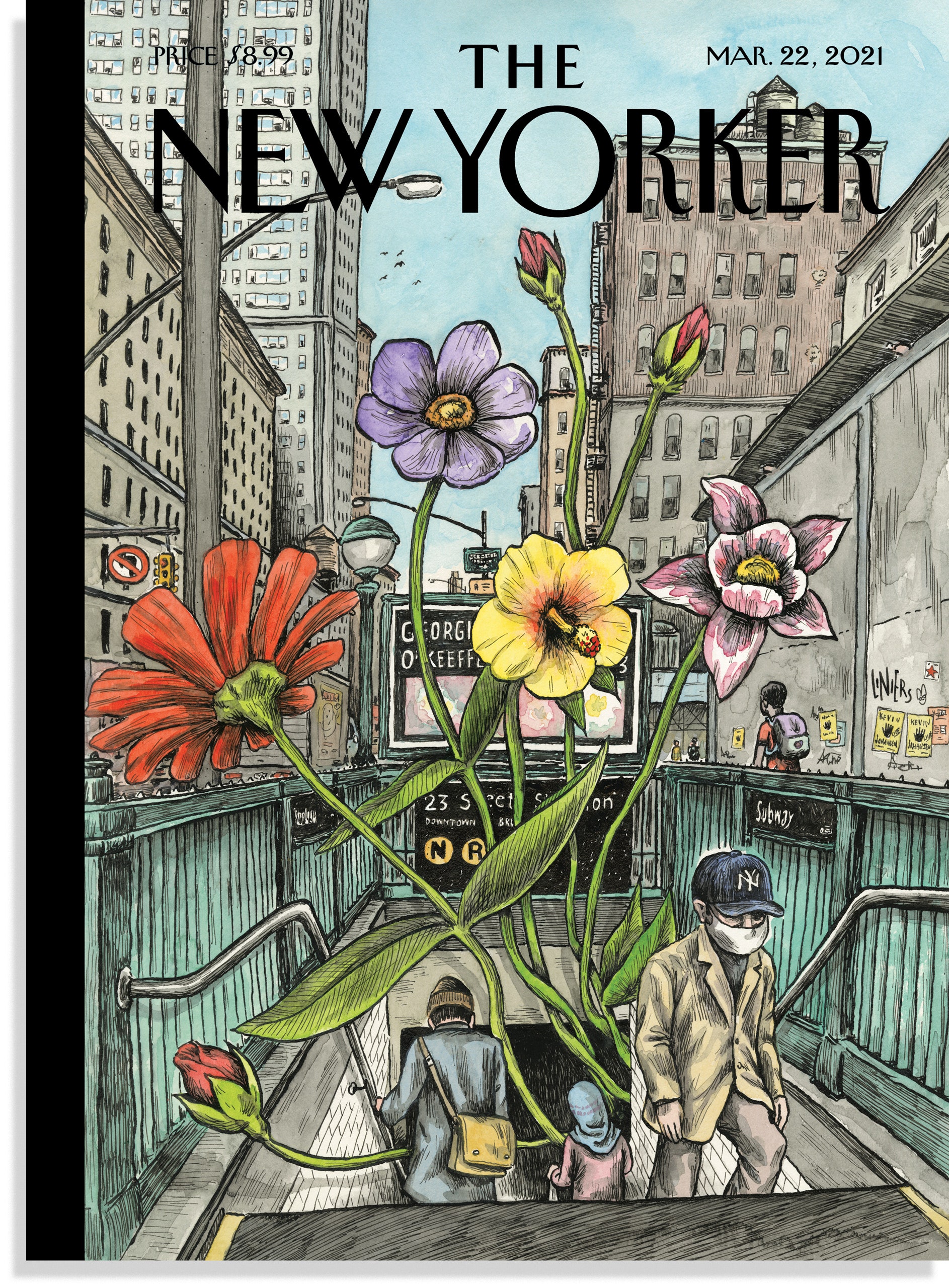 There don’t seem to be any big patterns in homeownership growth – southeast coastline, northern Texas, northern California coastline seem to stand out. 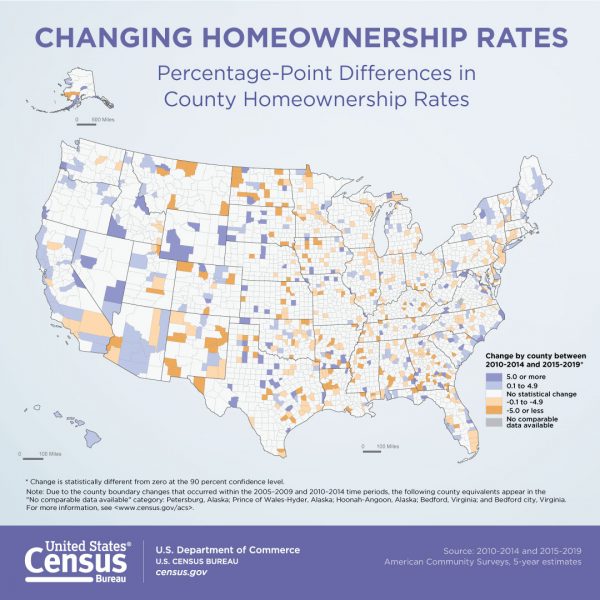 From howmuch.net – Top 25 Most (and Least) Expensive American Cities to Rent an Apartment 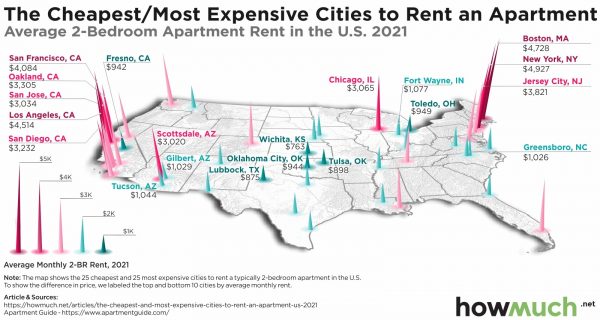 How the real estate brokers in Palm Beach refer to the COVID housing market. 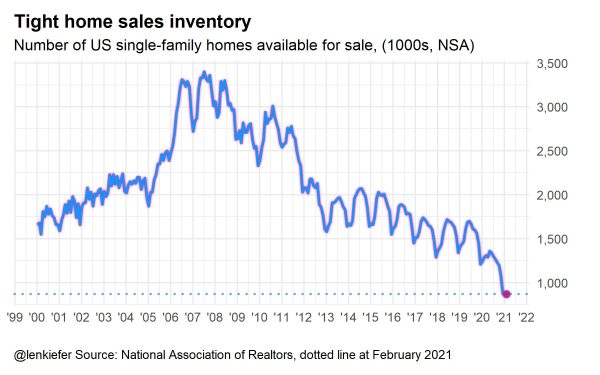 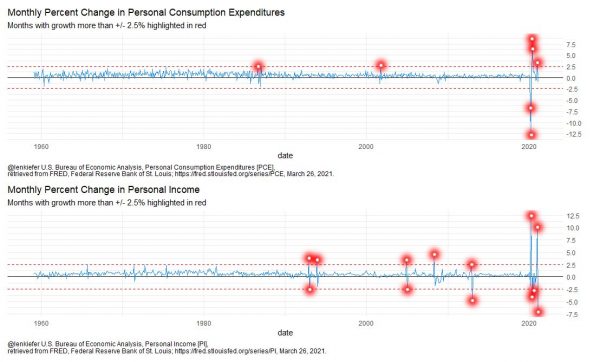 Project Teams: The Appraisal Institute Practices Recycling, But Doesn’t Take Out The Trash

One of the frustrations of AI membership has been how the organization has not kept up with changing times, but instead, focusing its energies on workarounds to keep long-time FOJs in power and circulation. And this lets FOJs keep the money rolling in by overpaying executives and letting them fly business class with their emotional support spouses and other lackeys all over the world without actual benefit to the members. The collective braintrust of the Appraisal Institute is quite impressive so why not bring in new ideas and new leadership? The organization as it is currently run, is unable to see ahead of the curve without an influx of new thinking. The world has changed and the Appraisal Institute has not – this is why the organization continues to drift into irrelevance to the outside world and why people like me are so concerned about the damage their negligence is causing to the profession.

I’ve been covering the Sham Petition Process quite a bit over the past year, chronicling its utilization and the fraud it represents. The organizational pivot to its current sorry state was a measurable moment in time: 2007 when the Sham Petition Process was invented to get Leslie Sellers into the ranks for the eventual presidency by 2010 after failing to win the NNC approval, and actually voted for himself instead of recusing. In 2010, I saw his AI video, which announced the exit of AI from TAF, and was disgusted by his reasoning (paraphrased) “We are so excited about our future, now having the freedom to grow.” I left AI at that point and watched its membership ranks fall by about 30%.

We saw the Sham Petition Process maneuver’s return that attempted to ram FOJ favorite “Tank” down the membership’s throat (which he willingly threw his name into the hat) to cancel the NNC choice who had already publicly announced, Craig Steinley.

That’s not the only reason FOJs work hard to control every move of the Appraisal Institute. Stacking committees with FOJs and using the formation of project teams to crush dissent has been another way.

Here’s the difference between “committees and “project teams:”

Project Teams Presidential Appointment, No BoD approval, No Money available, Report to the Executive Committee (and usually die after three years, not accountable).

Project teams are used for political purposes, often to kill an insurgency by placating in the short term and then doing nothing about the issue. For example, the residential appraiser project team was formed back in 2017 and had about thirty members. Jim Amorin formed it to appease the membership during the uprising of residential members when AI Headquarters plotted to take control of chapter dues. The project team never meets and has not done a single thing yet to advance the residential profession. Shameful. By 2018-19 the membership was down to about ten members and still has not done anything. Why would someone be a member of a team that does nothing?

And membership on these project teams is not made public like committees are. Why is that? What about transparency?

Committees Appointed by President but must have BoD Approval, Budget with money, Chair reports to BoD at Quarterly meetings (accountable).

Here are some glaring examples of keeping the older FOJ ex-leadership in positions of influence – I have heard there are about 40 positions available each year, and about 400 apply. With 17K members, I would think it would be a snap to fill 100% of these committee openings with new members every year. Instead, AI recycles some of the worst leadership the organization has ever had, allowing Jim Amorin to run the organization like a dictator and not be concerned about its members.

Why is this happening? This is poor governance 101. How can an organization evolve when the same people are in positions of power for years? To be blunt, dinosaurs representing a failed institutional legacy should not be on these committees if the organization wants to grow and remain relevant.

And why is an executive such Jim Amorin on the Government Relations Committee?

To review how it is supposed to work, here are links to Regulation 7 and the current bylaws.

C’mon AI President and BoD, please get to work to stop this hostile institutional takeover before the authorities do.

This excellent piece Redlined, Now Flooding made a mistake and it is part of the growing false narrative that Brookings and many real estate journalists are perpetuating.

Unfortunately, the appraisal industry’s two largest organizations have been long mired in their own internal self-dealing that they no longer have the backs of appraisers. Appraisers are exposed with no one taking action to represent us other than pithy press releases.

The problem with this piece is the journalists conflate banks and appraisers – the appraisers appraised houses that were mortgaged by banks, who redlined applicants. The banks redlined, not the appraisers. This presentation makes it sound as though the appraisers determined who was redlined. I’m not excusing systemic racism but this is a mischaracterization of what happened. Redlining is what federal agencies and banks were built on during the Great Depression and afterwards. I have pointed this out to Citylab. 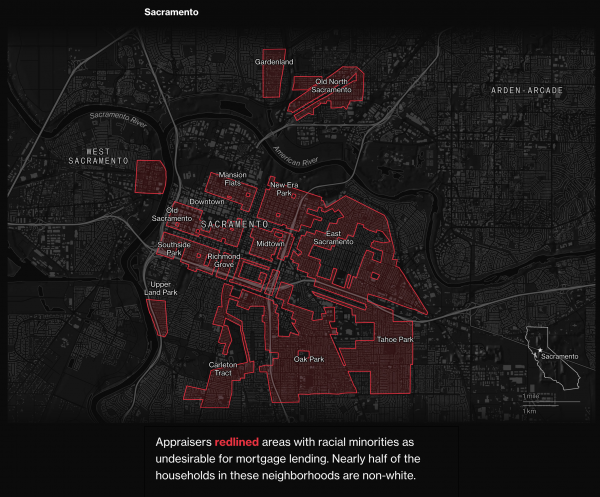 This is from appraiser Dave Towne (email him to get on his distribution list):

There has been considerable discussion about ‘bias’ applying to appraisals on forums, and elsewhere, since the Congressional hearing in 2018 where appraisers were blamed for racial bias by the rep from the Brookings Institute.

That rep vilified appraisers as being the culprits in the lending process, which is mostly bogus. Unfortunately, now that the charge has been made, appraisers and appraisal organizations are now forced to play on the defensive side of the ball, rather than being proactive and disclosing what actually transpired, on offense. I sense appraisal organizations are afraid to tell the real story. And it’s been real hard to disprove the negative. Appraisers are easy targets.

The fact is, appraisers as an independent entity, had almost NO involvement in the restrictions that governments and lenders instituted beginning in the early years of this country. I recently read a tidbit of history disclosing how a former mayor of Las Vegas, NV forced a certain ethnic group to relocate their businesses and homes to a different part of the city, out of downtown. This was not the only place in this country where it happened. Other ethnic groups have been forced to live underground (really) in certain cities because they were not respected ‘topside.’ Yet, it was those ‘below ground’ people who enabled the ‘topside’ folks to prosper greatly.

Lenders early on, and into the 1950’s, were probably the worst of the bunch in the way they established ‘approved’ neighborhoods and ‘disapproved’ other neighborhoods for lending purposes. I don’t need to repeat the common term that was used verbally and on maps during those times.

Race and ethnicity divisions has been a global issue since humans first walked upright and began functioning. This is not a uniquely US problem, or one associated directly with appraisers. Humans have a propensity to segregate themselves as a natural course of existence. There is no magic wand that will cure this despite what some think and are trying to force on society.

Meanwhile, appraisers have had to figure out which properties were the most appropriate when doing an appraisal….and those were most likely from the specific neighborhood(s) where the ethnic or racial borrower was located so that the report would ‘pass muster’ and be usable for the requested loan. When the property was “here” the lenders didn’t want comparables used from “over there”, otherwise the lender probably would not approve the loan.

So it’s not really the appraiser at fault for not ‘helping’ certain people rise economically, as often is the charge. Appraisers have been stifled, discouraged, even threatened from doing so, since appraising became a US profession in the mid-1930’s.

Tonight, when I was doing research for something totally different, I found this info (below and in the attached PDF) on a Washington State county auditor web site…..which I’ve never seen before.


I would encourage all appraisers to research their own property deed, and contact the appropriate ‘recording official’ in your state to see if this is being done, or can be done, where you are. More info is in the PDF.

What are racially restrictive covenants?

No. In 1948 the United States Supreme Court ruled that racially restrictive covenants could not be enforced. In 1968 the federal Fair Housing Act banned covenants discriminating on the basis of race, color, religion, or national origin.

A 1929 colorized video of construction workers on the Chrysler building in New York.

At 1,046 feet it is the tallest brick building in the world with a steel framework, and was world's tallest building for 11 months after its completion in 1930. pic.twitter.com/cGBf1fr0fK

And one on street level…