A lot of the housing market coverage (and my guilty pleasure) remains fixated on super luxury housing sales. Apparently I’m not alone. The topic is widely covered in the media and many national news outlets have been ramping up their focus on it.

Fantasy marketing of housing is a global phenomenon.

Yet the juxtaposition of how the .001% lives and how us mere mortals live continues to be confusing. Remember the old Robin Leach show, Lifestyles of the Rich and Famous? The show hasn’t aged well (and makes me wonder how I survived the eighties). As a testament to how terrible television programming has become, NBC is actually bringing it back. Rehashing a dated hit to connect with the current phenomenon.

The big difference in the “how the wealthy live” storyline then and now is that we used to assume people actually lived in those luxury homes. Today high-end properties are merely one of a series of collectible assets such as vintage cars, art and gold. Perhaps the main advantage of considering homes as a “collectible asset” is that they enable better boasting.

“People want trophy homes,” Eyal Ofer, a Monaco-based shipping and real estate magnate, said in interview earlier this week at the Milken Institute Global Conference in Beverly Hills, California. “They’re a scarce commodity. And they’re better than gold because you can boast about it.”

Yet I’m not sure these homes can be characterized as a scarce commodity anymore. The fact that $40 million dollar list prices are appearing across the U.S. now is almost commonplace.

On the less fantastical side of the housing equation, the homeownership rate continues to fall and as a result, the rental market is seeing upward pressure on prices. I attribute much of the decline in homeownership as a product of the financial crisis hangover and NOT some sort societal change in consumer values. The 60-year homeownership trend below provides a strong visual on how unsustainable the rate of homeownership growth was from the late 1990’s through 2006, the peak of the U.S. housing bubble. When there are few to no underwriting standards, more people buy houses. Our frame of reference in the falling homeownership discussion is incorrect since the decline is being measured from a period were there were literally no underwriting standards and no concern about risk by banks. 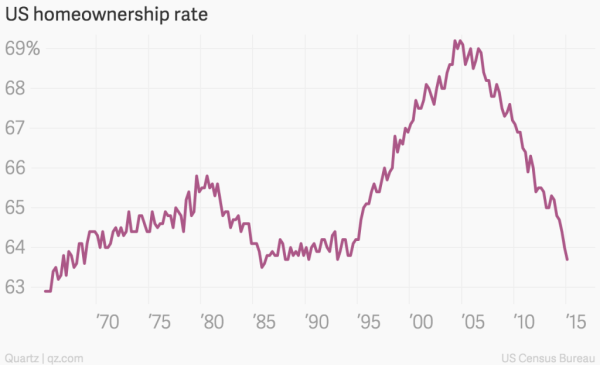 Actually, I prefer to characterize mid-aughts economic period as a credit bubble with housing as a symptom. Despite the decline in the homeownership rate, I believe we are retracing our steps and returning to the long term trend but will probably overcorrect before we normalize.

Since the housing bust, homeownership has been held back by what I believe to be fairly crappy economy (sorry, an underused economic phrase) despite hopeful economic news. We are seeing improvement but at a very slow pace. Unemployment numbers are much improved (but still questions about the methodology of tracking it). Wages have remained largely stagnant for the past decade. Access to credit has remained a challenge. Interest rates have been falling for decades and mortgage origination volume has been falling for nearly ten years.

There are a dearth of first time buyers now. Why? Tight credit. When a renter transitions into the purchase market, more than usual don’t qualify and they are tipped back into the rental market creating what I refer to as a “log-jam” effect.

As I’ve written before, homeowners with low or negative equity are unable to transition to the next home so they don’t list their property and simply wait for things to improve. Homeowners who have no credit challenges won’t list until they find something they want to buy so inventory remains low. Low inventory pushes housing prices higher for the fewer than can afford them, keeping more potential first time buyers out of the market, causing rents to remain high. Regional economies that are seeing record employment growth are hit even harder as new employees tend to enter the housing market through rentals.

Years from now, a normalization of the U.S. housing market will come down to fundamentals like wage growth, employment and access to credit. But for the rest of the world (and the reason for the recent rise in the US Dollar), their weakening economies are going to continue to drive the luxury housing phenomenon with or without Robin Leach.