The Danger of Drawing Housing Markets With Avocados

I plan to take advice from my friend Nathan Pyle when drawing my next floor plan for one of my appraisals. I’ll simply insert a bubble that says “Hi! I’m the kitchen sink!” 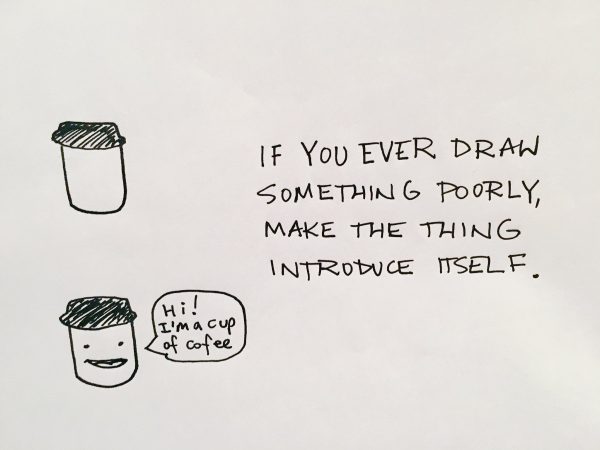 But if you are inclined to draw, make sure you are very careful with avocados or you won’t be able to. Prices are booming…

… but so are avocado-related trips to the emergency room.

Got it? Now back to drawing the market.

Douglas Elliman published our monthly rental market research on the rental market this week. The April 2017 Elliman Report on Manhattan, Brooklyn & Queens is part of our expanding report series I’ve been authoiring since 1994. The market continued to show significant polarization by being soft at the top and strong in the entry-level. One of the easiest ways to illustrate this phenomenon is comparing doorman and non-doorman median rental prices. While there is a lot of overlap in property types, this breakout is literally a 50/50 split.

Here’s my take on it (I am making up for taking band in high school). 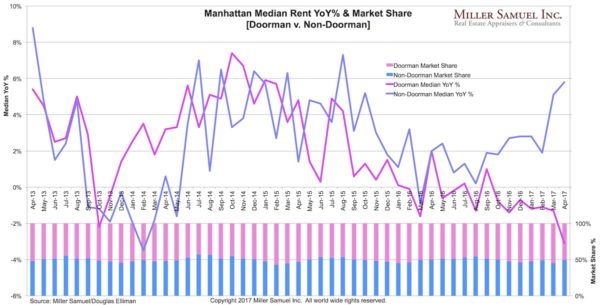 although Bloomberg presents a much better version with our data… 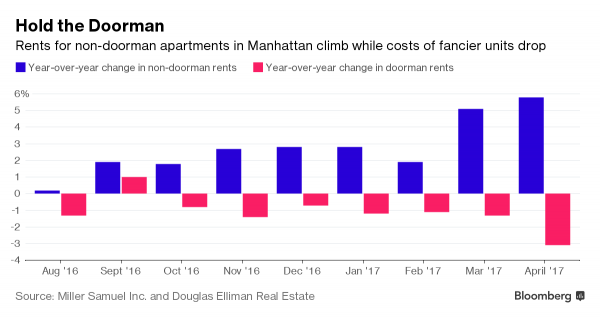 …and was the 8th most emailed (9th most read) on the Bloomberg terminals world wide.

Here are some of my favorite Manhattan rental charts we created this month. 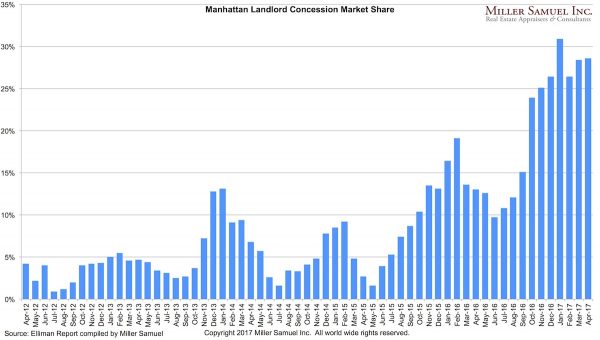 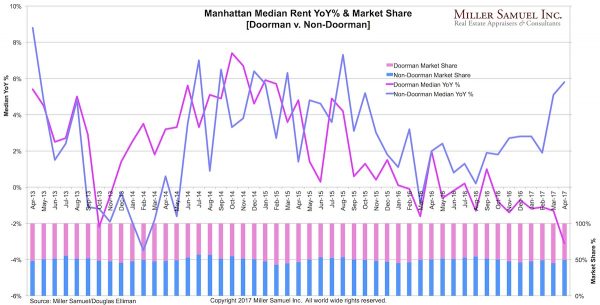 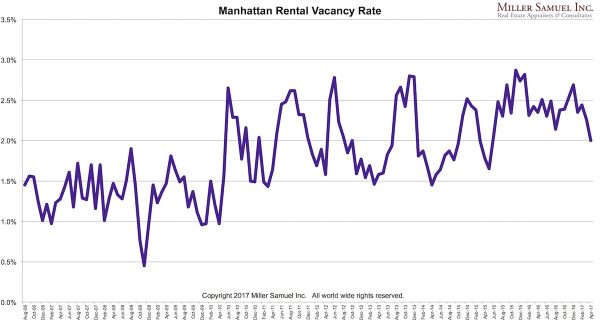 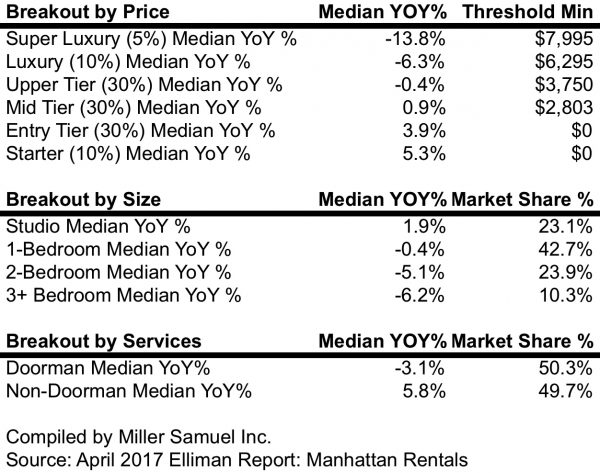 Streeteasy Premier Agent is not leveling the playing field

The Real Deal magazine has been going after the new “Premier Agent” product that caused an uproar in the broker community because the actual listing agent was hidden from view and only those agents that paid to be on the site would have their names adjacent to the listing. In Konrad Putzier’s column this week, he explores this concept further. It was very odd to see Streeteasy stand by their position given the unethical nature. Finally they acquiesced by creating a navigation path to get to the listing agent. What I originally loved about Streeteasy before it was acquired by Zillow, was their neutral position in the market. They built a better mousetrap than the individual brokerages to display listing information and as a result, they became ubiquitous. Now they seem to recognize their lack of competitors and continue to figure out new ways to screw up the site over time.

In real estate today, there are magazines, events and cable access shows where the speakers, or moderators “pay to play” and as a result, the content sucks because the product is not the best that can be offered and the only people that view it are those that paid to play. Streeteasy seemed to ascribe to that model by hiding the listing agent.

whereas I contended that

And that, my friends, screws the consumer since they don’t understand the nuances of who is listing the property. I understand Streeteasy needs to make money, but presenting content and expertise transparently to the consumer is just as important.

Politics and personal feelings aside – whatever your views are, Josh Brown, CEO of Ritholtz Wealth Management makes a compelling case as a regular on CNBC Fast Money that the Trump Trade is over. The market has already decided, based on actions, that the current administration, with all the political distractions, isn’t likely able to follow through on their promises this year.

To housing, that suggests there won’t be a big tax cut, no singificant increase in interest rates, no GSE reconfiguration this year.

The Housing Recovery That Wasn’t

For many U.S. housing market observers, the benchmark determinant of whether we got back to zero has been the S&P/Case Shiller Index. My extreme distaste for this index aside. Only recently has the index exceeded the 2006 peak – that we dug out of the hole we fell into. 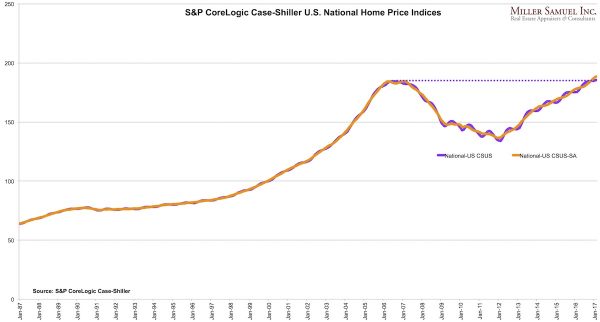 Based on a compelling analysis by Trulia, we aren’t quite there yet. For example, home prices in NYC metro are largely below 2006 prices. You can see how the coastal U.S. severly lags price recovery of the central U.S.

Trulia looked at income and home value recovery in this interactive chart its extremely compelling.

Just walk down a street in the downtown section of your town and take a look at the vacant storefronts. There are probably a lot of them. There is an interesting shift that is occuring. Consumers have been drawn to new urbanism housing trends, you know, walkable cities. Yet the retail that gives them something to walk to is evaporating in front of them.

It’s being called the “Retail Apocalypse” since 90,000 jobs at brick and mortar retail have been lost since October.

Yes, Amazon has played a role, but Lois Weiss, retail journalist maven, provides another nuts and bolts view in her Bisnow column: Retail Is Being Manipulated To Live Another Day

In this Bloomberg Gadfly piece, you can see that department stores are being crushed. 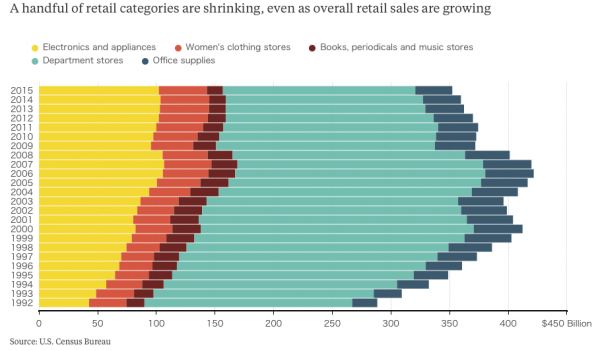 Other Research of Interest

Lower Manhattan Real Estate Market Overview Q1 2017 – This is a study on the economy in lower Manhattan from the Downtown Alliance. I provide them the residential rent and sales data research from my work on the Manhattan sales and rental reports for Douglas Elliman – conditions continue to improve. 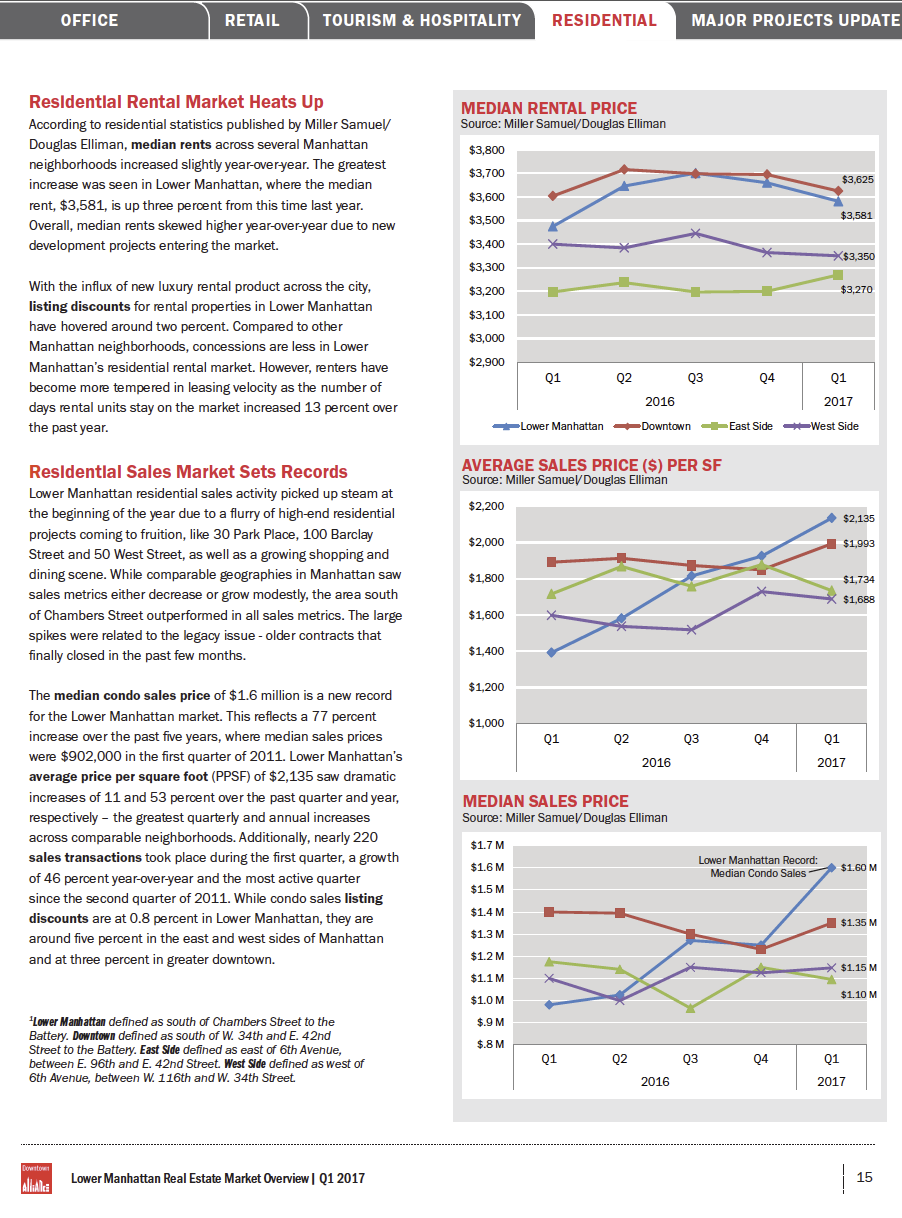 Knight Frank Prime Global Cities Index – Knight Frank is a global real estate services firm that has an alliance with Douglas Elliman. I provide housing data for this particular report in markets that I cover in our Elliman report series. Their graphic designers must be on steroids. It’s a fascinating report. 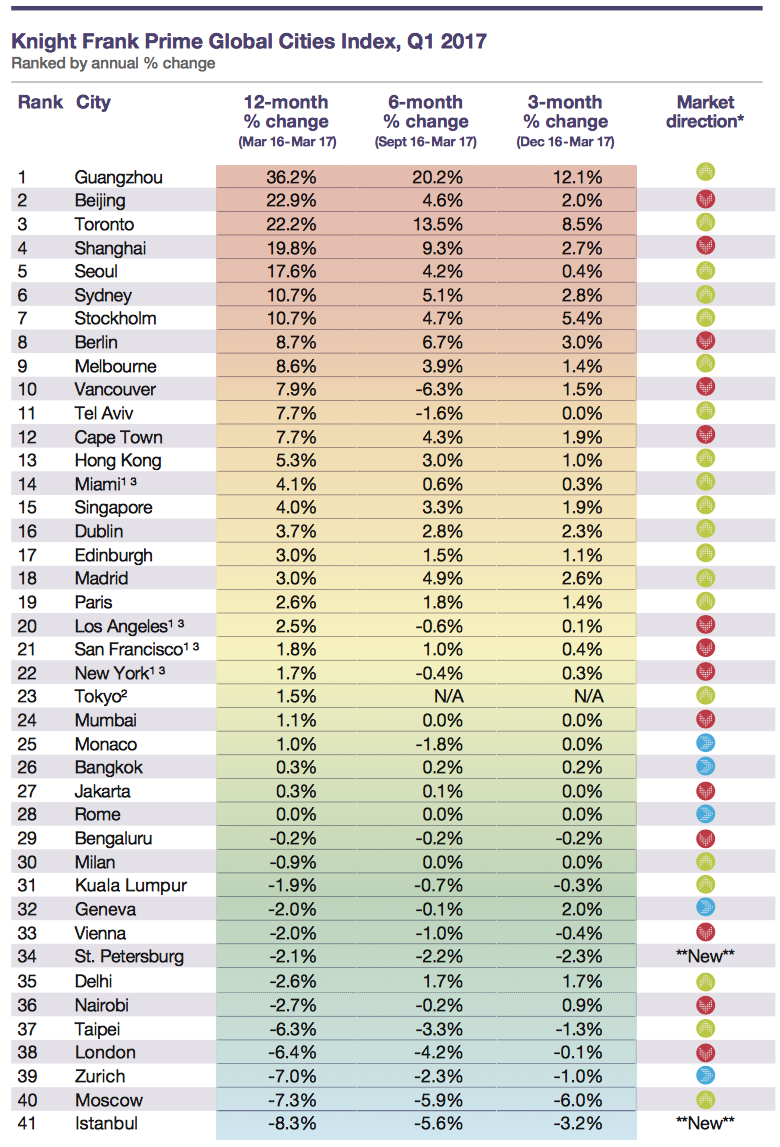 Autocrats and Skyscrapers: Modern White Elephants in Dictatorships: This a fascinating white paper on the proliferation of tall towers worldwide. I discovered this through Citylab, which does great job discussing the phenomenon and bringing in other insights from the Council on Tall Buildings and Urban Habitat.

The trend is staggering… 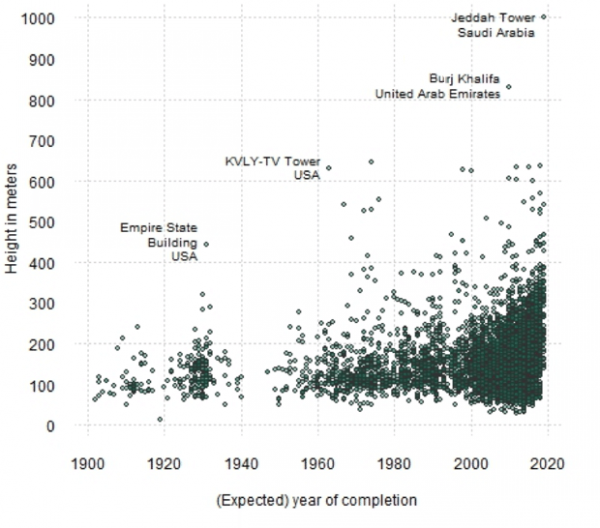 But the Citylab article provides the best answer in the subtitle:

Why Do Autocracies Build Taller Skyscrapers?
Short answer: Because they can!

Earlier in these Housing Notes, I talked about a Zillow/Streeteasy product called Premier Agent that caused a firestorm in the real estate brokerage community. They were ommitting the actual listing agent from properties that appeared on the site and only presented broker contacts adjacent to it that paid for placement. They eventually compromised, but I was struck by how hard they defended a practice that was clearly misleading the consumer. Being a disrupter as Zillow is, doesn’t mean they have to be unethical. Think about Napster and Uber for example. Now Zillow is in the spotlight again for their “Zestimate” product which has successfully “normalized” AVMs as something everyone can rely on even though they repeatedly say it is not an appraisal.

Zillow Gets Sued Over Zestimates

I linked out to this lawsuit in last week’s Housing Notes but it is starting to snowball. Now columnist Ken Harney writes a great piece on the lawsuit and Phil Crawford landed an interview with the plaintiff, Barbara Anderson, who also happens to be a lawyer.

Zillow’s website prominently disclaims its “Zestimates” are not appraisals, but are merely computer-generated estimates intended to help those looking to sell, buy or refinance a home gain a “ballpark” idea of what a house may be worth. She said Zillow’s estimates primarily rely on public information, but can be adjusted based on information homeowners may provide themselves, to provide key details and information, such as square footage or completed home renovations, that Zillow could not otherwise know.

My key issue with the Zestimate is how they present it. A Zestimate on a house is presented to the dollar. It infers a precsion that doesn’t exist. I’ve been saying that for a decade including in meetings with their president early on and other executives, as well as in this WSJ article back in 2007 when the Zestimate screwed up the value of my home. When I edited my home attributes to correct public record, my value at the time increased 500%. I liked that number better but I wasn’t on drugs.

The SEC is Looking at BPO Inaccuracy in Homebuilder Valuations

Here’s a short clip on whats happening from Bloomberg Radio.

While I don’t bring sports into Housing Notes very often, there is a very good website called The Players Tribune. It’s got a lot of great stories about the trials and tribulations of professional atheletes in their own words. Derek is reportedly close to buying the Florida Marlins and I think he wanted to make sure he didn’t snub New York in the process. I watched him play for two decades. I love this guy.

If you need something rock solid in your life (particularly on Friday afternoons) and someone forwarded this to you, or you think you already subscribed, sign up here for these weekly Housing Notes. And be sure to share with a friend or colleague if you enjoy them. They’ll eat more avocados, you’ll sketch coffee cups and I won’t fall asleep in court.