Standing Up To Housing’s (and Life’s) Forklifts: Jane Jacobs Edition

This week has been been full of many challenges for me to process. Our appraisal firm has been booming, performing a lot of consulting work for those seeking guidance during the changing market conditions.

As a result, this Housing Note is more about exploring the change in mindset that participants of the housing market are going through – rather than a lot of charts and reports (ok, perhaps a few).

First there is an important issue to address. Cracker Jack is going all digital (with their prizes). Admittedly their lame paper prize replacements for their lame plastic prizes of my childhood were also an emotional set back. Who would have thought that going digital would feel like a mistake?

I’ve written quite a bit about the changing New York City housing landscape in recent weeks. Some developers continue to defy the change in conditions. The slowdown in the super luxury new development space is causing many lenders to reconsider projects about to enter the market or entertain negotiability with buyers that are interested, but not at 2014 prices.

As if they didn’t need any more challenges, some developers have rogue contractors who feel free to move legally parked cars with forklifts. 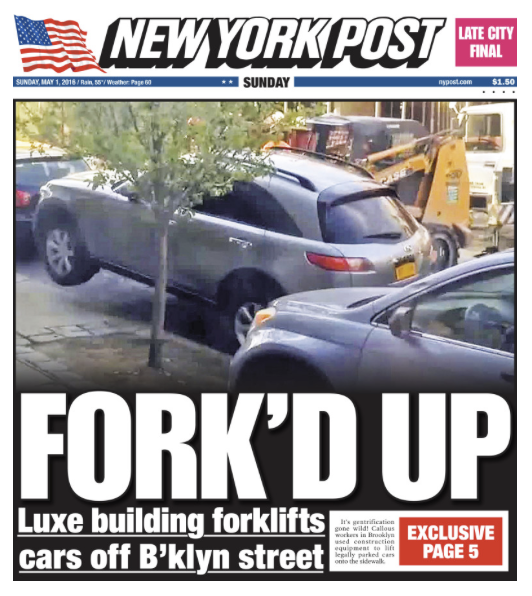 A little over a month ago I wrote “What’s in a Neighborhood Name? Ask Boaty McBoatface.” An inspirational story of crowd sourcing a name for a new polar research ship. I had hoped my readers what have gotten the hint and sent in some good names for our boat – still unnamed after 5 years of ownership. No such luck. And even worse, Gizmodo reports that the owners are going with a slightly less fun “RRS Sir David Attenborough.” There is still some hope for humanity, since the owners are applying the number one suggested name “Boaty McBoatface” to their high-tech remotely operated undersea vehicle. Sigh.

We are excited to announce that #BoatyMcBoatface will live on as a high-tech remotely operated undersea vehicle pic.twitter.com/05aTaxGEgm

Writer and urbanism proponent Jane Jacobs would have turned 100 years old this week. As an icon of the urbanism movement, I believe history has proven her views to be largely correct but it took some time, at least in the context of today’s New York City. Her 1961 book ‘The Death and Life of Great American Cities‘ changed the thinking of urbanism towards focusing on neighborhoods and their occupants…that living in cities should be fun (my interpretation). In the spirit of transparency, I must confess I haven’t read her book yet despite sitting on my nightstand for a long time. But guilt is a powerful thing and I started reading it a few days ago.

There are lots of Jane Jacob articles in my reading list at the bottom of this Housing Note. Curbed went all out with this theme. Click on the graphic to explore them. 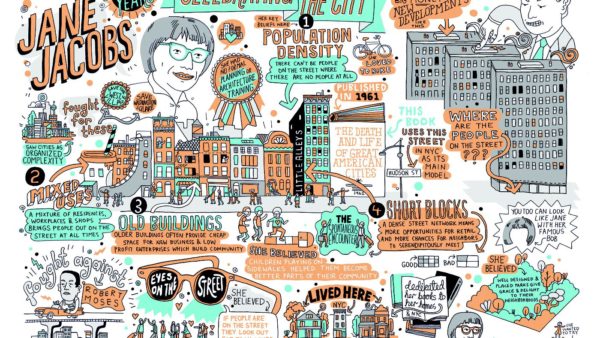 One of her chief adversaries was Robert Moses, the “Master Builder” who Robert Caro chronicled in the “The Power Broker: Robert Moses and the Fall of New York.” I read that book not long after we moved to Manhattan in the mid 1980s. Loved all 1,200 pages.

Moses was in power for nearly a a half century. He famously (and defiantly) told a neighborhood group, when talking about the plans for the Cross Bronx Expressway to randomly split neighborhoods in half – and I am paraphrasing: “to make an omelet you have to crack a few eggs.”

The documentary Rumble Kings explored gang violence in the Bronx. I mentioned it in a prior Housing Note. It placed the blame for the collapse of the Bronx into chaos came from the construction of the Cross Bronx Expressway. I’ve also mentioned this before but growing up in the Washington DC metro area, I remember going to NYC movies such as Fort Apache, The Bronx and The Warriors and being awed by the lawlessness and decay found in “big cities.” Both movies reflected the eventual aftermath of the highway’s construction – if the documentary’s premise was accurate. Thankfully that period of history is behind us.

Seeing The City Upside Down

Here’s another short film to absorb. Erosion provides imagery in and over Brooklyn – it really spoke to me. It’s very short so please watch it in its entirety in full screen mode – the city aerial imagery is amazing.

EROSION from Tim Sessler on Vimeo.

What MLS systems and Real Estate Portals Actually Are

There was a great read in Brooklyn Patch that shoots down the claim that New Yorkers spend 65% of their salaries on rent. Streeteasy posted another macro comparison piece for SEO. While I applaud any effort to provide more transparency, tt is important to understand what real estate portals and multiple listing systems really are.

They are a system of rules around a central database. That’s it. They are not a collection of housing market insights or knowledge. The possession of lots of data doesn’t mean they know what to do with it or have more insights just for having it. Think about how much information you carry around in your daily life? Is it easy to understand there world around just because you have a full calendar and contact list? The people running portals or MLS systems – aside from the board in most MLS cases – rarely have any real estate experience and therefore lack proper context. The Patch author of this piece shows amazing analytical insight – he needs a raise or a promotion immediately.

Speaking of upside down, mortgage rates continue to show significant weakness. That means the economy is not quite there yet. Not very good news for housing either. While it helps affordability by keeping mortgage payments down, low rates keep bank lending credit standards tight. But non-bank lenders are already showing frothy behavior. Trouble ahead on that front. 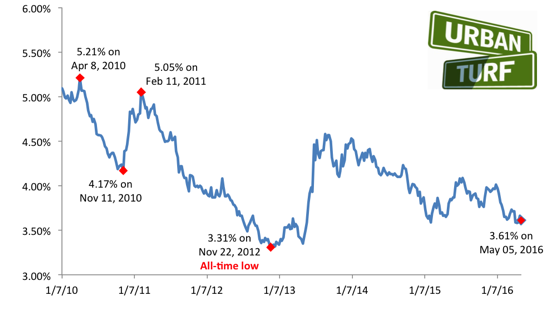 Speaking of froth, ping pong tables sales are down. Does that mean the tech bubble is popping? I love looking at correlations like this, mentioned in a previous Housing Note, most are we call in the real estate business, silly.

Stuart Elliot is the editor-in-chief of The Real Deal, an essential read in NYC, LA and South Florida housing markets, wrote a note “The $800 million man” which listed the net worth of NYC real estate titans and there was one clear winner: Blackstone Group CEO Stephen Schwarzman

So it is no surprise that the seller of the highest priced co-op sale year to date was also from Wall Street. The $48 million listing sold for $52 million. They bought the co-op apartment in 2007 at the height of the last boom for a mere $29 million and then renovated it. Notice how the living room view in the photo doesn’t quite clear the treeline of Central Park? You’ll need another $20 million for that.

I experienced a taste of Wall Street back in 2007 – when a firm tried to buy our company. Even the above compensation numbers wouldn’t be enough to go that route for me. Really. It was awful.

And if we go with the awful imagery theme, I remember how, during college, one rogue squirrel shorted out an electric substation nearby and brought down the power grid for a large part of the state. It’s just a hop-skip and a jump to say suggest that one person/animal can do a lot of damage.

An industry can do a lot of bad:

Yearning for the Good ol’ Days

There was a fascinating piece in this week’s Financial Times: Barclays launches first 100% mortgages since crisis

It’s not as bad as it sounds but it still suggest that old habits die hard, especially from a bank that was severely hurt by the credit bubble crash.

The bank is allowing some buyers to take out a mortgage to 100 per cent of the value of the property, without needing a deposit. Most banks require at least a 5-10 per cent lump sum.

In realty this is more like 90% or 95% financing which is something that FHA currently provides. I’m not trying to sound like an alarmist but this does suggest that we will see more aggressive lending behavior in the future to keep the mortgage pipeline full. And it doesn’t resolve the issue of providing affordable access to housing since the bank of “mum and dad” is still required to provide the equity.

This article brought to mind the idea of losing one’s mind in the city. It’s called The Irrational Fear of Nothing. Totally cool.

The Irrational Fear of Nothing from Paul Trillo on Vimeo.

If it wasn’t obvious, you needed to read this Housing Note with a large buttered popcorn.

If you need something rock solid in your life (particularly on Friday afternoons), sign up for my Housing Note here. And be sure to share with a friend or colleague. They’ll no longer yearn for the good old days, you’ll no longer feel like a weasel and I’ll be happy with that candy coated popcorn with peanuts and a prize.